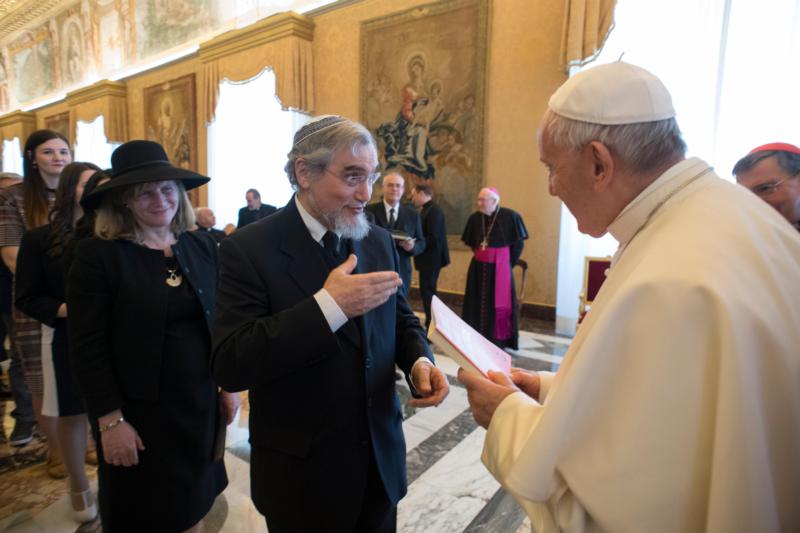 Pope Francis greets guests during an audience at the Vatican Feb. 28, 2019. The audience was with participants marking the 50th anniversary of the death of German Cardinal Agostino Bea, whom the pope called “a model and source of inspiration for ecumenical and intereligous dialogue.” (CNS photo/Vatican Media)

VATICAN CITY (CNS) — The fruitful friendship and dialogue between Jews and Christians must go beyond the world of experts and academia, Pope Francis said.

“It would be wonderful, for example, if in the same city rabbis and parish priests could work, together with their respective communities, in service to those in need and by promoting paths of peace and dialogue with all,” he said.

This way the fruits of decades of dialogue “will not remain the prerogative of a select few, but become a productive opportunity for many,” he said Feb. 28.

The pope made his remarks during an audience with people taking part in a meeting to commemorate the 50th anniversary of the death of German Cardinal Augustin Bea — a leading biblical scholar who greatly influenced several documents of the Second Vatican Council and, particularly, the church’s relationship with Judaism.

“Cardinal Bea should not only be remembered for what he did, but also the way he did it,” the pope said.

“He remains a model and a source of inspiration for ecumenical and interreligious dialogue,” he told the attendees of the meeting, which was sponsored by Rome’s Cardinal Bea Center for Judaic Studies in partnership with the Pontifical Council for Promoting Christian Unity, the Pontifical Biblical Institute, and the Center for the Study of Christianity at the Hebrew University of Jerusalem.

Cardinal Bea had three qualities that are essential for anyone who works for reconciliation between people, the pope said.

First, the late cardinal knew “love and respect” are the keys to dialogue and that respect would always show people the “right way to propose the truth,” he said.

Second, goodness and humility allow people to “forge bonds of friendship based on our shared fraternity” as children of God, he said.

Third, he said, is the need to have courage, patience and perseverance driven by love.

For example, he said, when the cardinal had been told that the moment was “not ripe” for one of his proposals, he said, “Then we have to make them ripe!” Aware of reality and life’s difficulties, the cardinal did not give up on the need to respond to the Lord’s call for unity.

Encouraging work in the field of Jewish-Christian dialogue, Pope Francis added that it must be expanded to involved people who aren’t experts and places that are not specialized centers.

“Specialized research and knowledge are essential but not sufficient,” Pope Francis said.

“Together with this path, there is a need to set out on another, broader one: that of making known the fruits of the dialogue” to everyone, he said. “Friendship and dialogue between Jews and Christians need to pass beyond the boundaries of the scientific community” and become a lived experience by the Jewish and Christian leaders and faithful on the ground through shared initiatives.

“I am confident that your commitment, your research and personal ties between Christians and Jews can produce a fertile terrain for planting the roots of further communion,” he said.

NEXT: Christian charity must be supported by prayer, pope says