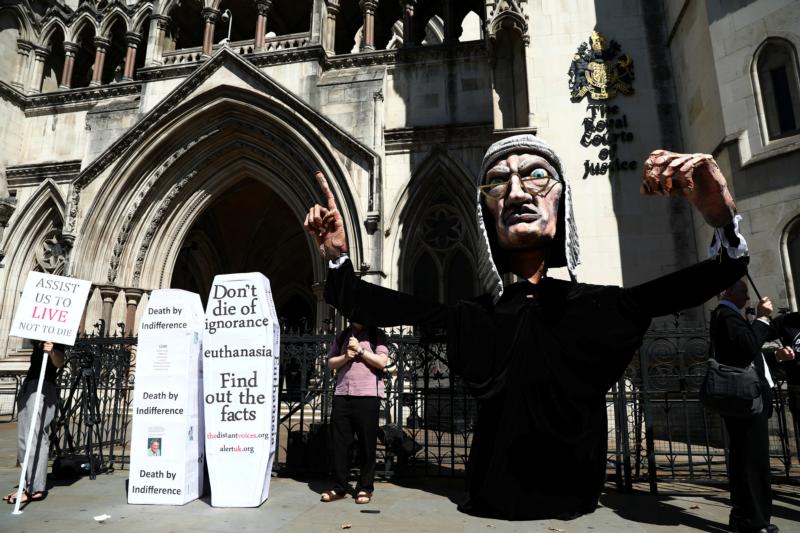 Anti-euthanasia protesters demonstrate outside the Royal Courts of Justice in London July 17, 2017. The head of the U.K. Catholic Medical Association says a professional physicians’ body is conducting a sham poll on euthanasia. (CNS photo/Neil Hall, Reuters)

MANCHESTER, England (CNS) — The president of the Catholic Medical Association in the United Kingdom has accused the professional body for U.K. physicians of “rigging” a poll on euthanasia.

Dr. Dermot Kearney, CMA president, said the Royal College of Physicians was guilty of “gerrymandering” and of organizing a “sham” survey so it could ditch its traditional opposition to euthanasia and assisted suicide.

Kearney is among more than 1,000 doctors to express grave concerns about the way the college is conducting a vote on its euthanasia policy.

In January, the college announced it would declare a neutral position on assisted dying unless a “supra-majority” of members — at least 60 percent — said they wished to uphold the policy against it. The results of the poll will be published in March.

The last poll, conducted in 2014, found that more than 58 percent believed the royal college should continue to oppose assisted suicide and euthanasia. Less than a quarter of members were in favor of a change in the law.

In a Feb. 4 telephone interview with Catholic News Service, Kearney, a cardiologist, said he believe that the new 60 percent threshold was chosen deliberately so the college could abandon its anti-euthanasia position.

“It seems a very strange way to conduct democracy,” said Kearney, a fellow of the Royal College of Physicians. “It certainly is not the way that democracy is conducted in most of the Western world.

“It is gerrymandering, rigging,” he continued. “It will come out as a sham result and it is one that is highly predictable before the poll begins.”

He said he suspected that the poll was being advanced by individuals within the royal college council who had an “ideological agenda.” But he said he was confident that all 420 members of the Catholic Medical Association would be opposed to the manipulation of the poll.

Kearney was also one of more than 1,300 doctors to sign an open letter delivered Feb. 1 to Andrew Goddard, president of the Royal College of Physicians of London, to express alarm over the poll.

The doctors told Goddard that the conduct of the college was “extraordinary and deeply troubling.”

“By leaning toward a ‘neutral’ position, the college is effectively stating that it is not formally opposed to doctors prescribing lethal drugs so patients can end their lives,” said the doctors. “In simple terms, neutrality is a misnomer and nothing more than tacit support for assisted suicide.”

The doctors urged the college to abandon its survey and to conduct polling “in the fair and democratic way it has approached previous polls on this issue.”

After a separate letter from 23 doctors was published Feb. 1 in the Times, the London-based newspaper, Goddard wrote to each member of the college to assure them that the poll was fair.

“As president I want to present a position on this issue which represents us all,” he wrote. “If 60 percent or more say we should oppose a change in the law, I will shout that loud and clear. And if neither position achieves the 60 percent threshold, I will shout just as clearly that the RCP does not support assisted dying.”

Lord Alton of Liverpool, a Catholic, told CNS that “for the RCP to adopt a neutral position on assisted suicide by way of a sham poll — with a distorted and contrived formula for declaring a majority — would have anything but neutral consequences.”

“Such an outcome would be represented as a shift in the views of doctors on assisted suicide and would be used as a vehicle to push for its legalization in the U.K.,” he said. “The RCP should be approaching this poll democratically and from a medical standpoint, not by playing politics with such a grievous matter of life and death.”

“It loads the dice,” he told CNS. “That, to me, shows there is something wrong with it.”

Among those supporting the proposed change is Raymond Tallis, retired professor of geriatric medicine and an elected member of the council of the Royal College of Physicians.

In a blog on the organization’s website, he argued that assisted suicide laws in other countries were working.

“The dangers predicted by those who opposed legislation have not materialized, while the benefits of law change are clear,” he said.

“The RCP should acknowledge the current law is not perfect, that legislative changes are happening around the world and that views amongst the profession are shifting,” he added. “A neutral stance would allow the RCP to respect the diversity of views without alienating significant numbers of members and fellows.”

NEXT: Witness to Christ with love, pope tells Catholics on Arabian Peninsula