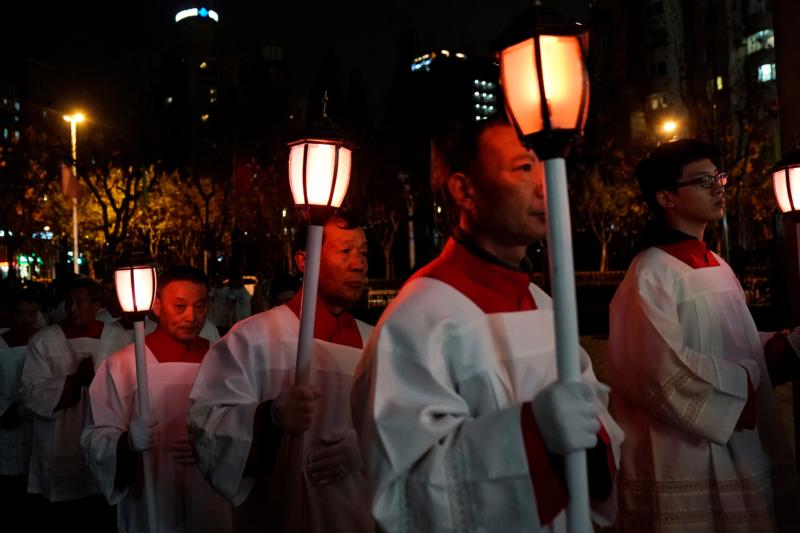 Chinese Catholics attend a Christmas Eve Mass in in Shanghai Dec. 24, 2018. The Catholic Church’s process of reconciliation and rapprochement in China is not a “competition or who is right, but of brothers and sisters in the faith, who all find themselves in a common house,” Cardinal Fernando Filoni, prefect of the Congregation for the Evangelization of Peoples, said Feb. 3, 2019. (CNS photo/Aly Song, Reuters)

VATICAN CITY (CNS) — The Catholic Church’s process of reconciliation and rapprochement in China is not a “competition or who is right, but of brothers and sisters in the faith, who all find themselves in a common house,” said Cardinal Fernando Filoni, prefect of the Congregation for the Evangelization of Peoples.

In a lengthy interview published by L’Osservatore Romano, the Vatican newspaper, Feb. 3, Cardinal Filoni likened the unique nature of the division — which came after the Communist Party established the People’s Republic of China in 1949 — to “a large boulder” falling from a mountain and stopping the flow of water of the Catholic faith.

“One part of the water flowed underground, while the other part continued to twist and turn on the surface,” he said. The Vatican’s work has been about rediscovering “the unity of the two currents,” but it was not and “is still not easy.”

For the Vatican, “it has always been held that in China there are not two churches, a ‘patriotic church’ and a ‘faithful church,'” he said. The church in China is one and it has been the faith of the people that has saved it from schism, he added.

The cardinal, whose congregation is responsible for accompanying the church in China, said the Vatican has spent decades trying to foster reconciliation between two Catholic communities. Those that have refused to register with the government and refused to follow government-appointed bishops commonly are referred to as the underground church. Many communities, though, have bishops who were elected locally but who pledged their unity with and fidelity to the pope, which in effect meant they were recognized by both the government and the Vatican.

The issue, Cardinal Filoni said in a lengthy interview published by the Vatican newspaper Feb. 3, “is not about the ‘underground’ surrendering to the ‘official’ or to the civil authorities, regardless of the appearance, nor of a victory over the non-official community.”

In September, the Vatican and China signed a provisional agreement over the appointment of bishops. The agreement allowed, for the first time in decades, for all of the Catholic bishops in China to be in full communion with the pope. The pope received into full communion seven bishops who had been ordained with government approval, but not the Vatican’s consent.

The pope also asked all bishops in China “to renew their total adherence to Christ and to the church” and reminded them that, “as members of the Chinese people, they are obliged to show respect and loyalty to the civil authorities.”