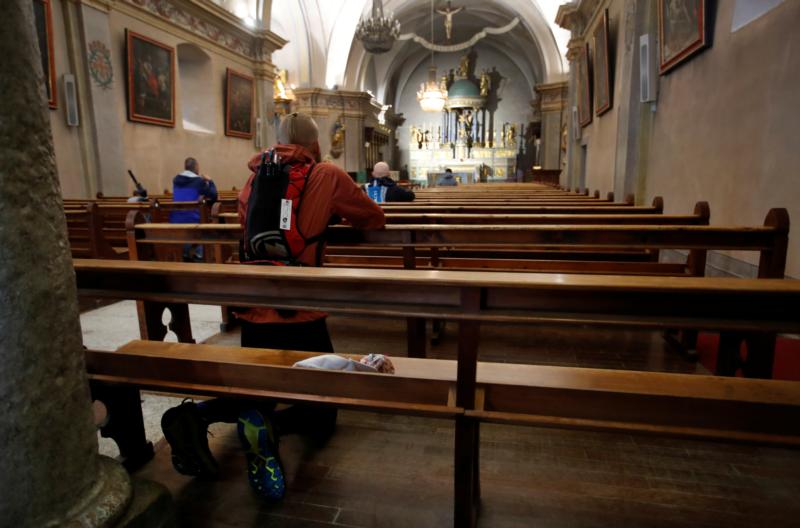 Worshippers pray inside St. Michael Church in Chamonix, France, Aug. 31, 2018. The Observatory on Intolerance and Discrimination against Christians in Europe in Vienna has warned of growing “anti-Christian hostility” in France after identifying assaults on churches and Christian monuments. (CNS photo/Denis Balibouse, Reuters)

WARSAW, Poland (CNS) — A church-backed religious rights organization has warned of growing “anti-Christian hostility” in France, identifying a spate of assaults on churches and Christian monuments.

“France is of particular concern now — while anti-Christian attacks are better documented here than in other European countries, the media pays little attention to them,” said Ellen Fantini, executive director of the Vienna-based Observatory on Intolerance and Discrimination against Christians in Europe, which is linked to the Council of Bishops’ Conferences of Europe.

“While the government recognizes Christians and Christian sites are being targeted, they don’t seem high on the agenda when it comes to the political will to provide protection,” Fantini said.

In a Feb. 14 report, the observatory said it had documented numerous incidents in the first 10 days of February, including arson and vandalism against a Catholic cathedral in Lavaur, and attacks on three parish churches in France’s western Vendee region, during which sacred figures were profaned and windows smashed.

The report said St. Nicolas de Houilles Church in Yvelines had been desecrated three times, destroying statues of Jesus and Mary, while a tabernacle had been thrown to the ground at the nearby church of St. Nicolas de Maisons-Lafitte.

“We join local officials and churches in condemning these senseless and disturbing acts. It is our sincere hope the perpetrators are brought to justice and that awareness of increasing anti-Christian hostility in France reaches the public square,” the report said.

Archbishop Roland Minnerath of Dijon celebrated a Mass of reparation Feb. 11 at his city’s Notre Dame Church, two days after its tabernacle was forced open and consecrated hosts scattered in another incident documented by the observatory.

Meanwhile, Bishop Robert Wattebled of Nimes said Catholics had been “hurt in their deepest convictions” after a tabernacle and hosts were desecrated with excrement Feb. 5 at the city’s Notre-Dame-des-Enfants Church. He said Feb. 8 in a statement posted on the diocese’s website that church leaders now faced “practical questions” over how to keep churches open without “excessive risks of vandalism.”

Catholic leaders repeatedly have urged firmer protection of Christian beliefs and practices in Europe amid growing complaints of prejudice and hostility, which also are monitored by the Organization for Security and Co-operation in Europe.

In addition, a Jan. 15 resolution from the European Parliament called on European Union institutions to “step up their commitment to religious freedom” by providing security for faith communities.

Fantini told Catholic News Service Feb. 15 that France appeared to be the “worst country in Europe” for Christians, because of “secularist, anti-religious intolerance,” combined with anti-Christian actions by anarchist and feminist movements, and “Islamists and potential Islamists.”

“Regional observatories on Christianophobia here routinely document anti-Christian attacks, and though the motives aren’t always known, many are clearly aimed specifically against Catholics,” she said.

“Certainly, there’s the will and enough resources in France to protect other frequently targeted sites. But doesn’t appear to extend to churches.”

NEXT: McCarrick found guilty of abuse, removed from priesthood