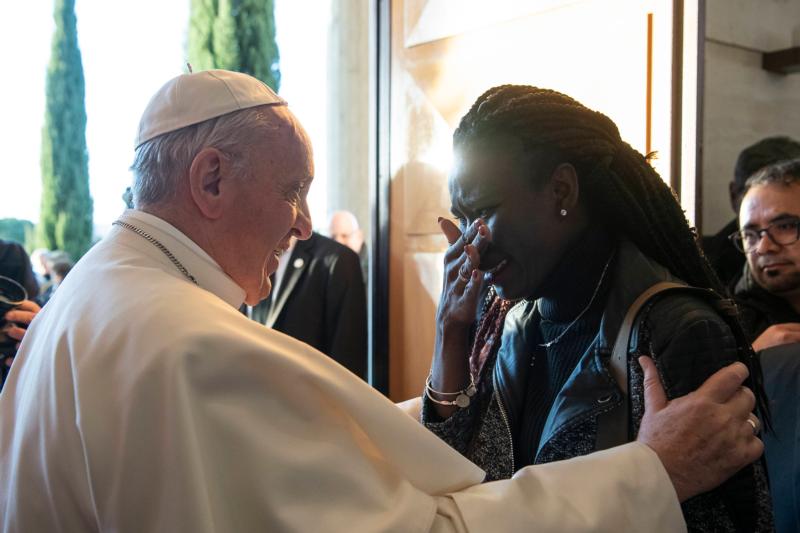 A women becomes emotional meeting Pope Francis Feb. 15, 2019, after a Mass for migrants and members of Italian Catholic parishes, religious orders, organizations and individuals who assist them. (CNS photo/Vatican Media)

VATICAN CITY (CNS) — Even if Christians struggle to recognize him with his “torn clothes (and) dirty feet,” Jesus is present in the migrants and refugees who seek safety and a dignified life in a new land, Pope Francis said.

If Jesus’ words, “Whatever you did for one of these least brothers of mine, you did for me,” are true, the pope said, then “we must begin to thank those who give us the opportunity for this encounter, namely, the ‘others’ who knock on our doors, giving us the possibility to overcome our fears in order to encounter, welcome and assist Jesus in person.”

Pope Francis spoke about overcoming fear and welcoming others during a Mass he celebrated Feb. 15 at a church-run retreat and conference center in Sacrofano, about 15 miles north of Rome.

The Mass was part of a conference titled, “Welcoming Communities: Free of Fear,” which was sponsored by the Italian bishops’ office for migration, Caritas Italy and Jesuit Refugee Service’s Centro Astalli. The 500 participants included representatives of parishes, religious orders and Catholic-run agencies assisting migrants and refugees, as well as individual families who host newcomers.

At a time when Italy’s government is trying to severely restrict immigration, Caritas Italy said the meeting was designed to encourage those working with migrants and refugees and to counteract fear of migration by highlighting how individuals and the entire country benefit from welcoming them.

The prayers of the faithful, most of which were read by migrants, included asking God to help pastors educate all Catholics to welcome migrants and refugees and to help government leaders promote tolerance and peace. Ending, as is traditional, with a prayer for the dead, the petitions made special mention of people who were killed for their faith.

In his homily, Pope Francis noted how the ancient Israelites had to overcome their fear of crossing the Red Sea and trust God in order to make it to the promised land. And, when the disciples were on the lake in a storm, Jesus told them to not be afraid and assured them he was there with them.

“The Lord speaks to us today and asks us to allow him to free us of our fear,” the pope said.

“Fear is the origin of slavery,” just as it was for the ancient Israelites, he said, “and it is also the origin of every dictatorship because, on the fear of the people, the violence of the dictator grows.”

Of course, the pope said, people naturally are afraid of what they don’t understand and of strangers who speak another language and have another culture. The Christian response is not to play on those fears, but to educate people and help them turn strangers into friends.

“We are called to overcome fear and open ourselves to encounter,” he said. “The encounter with the ‘other,’ then, is also an encounter with Christ. He himself told us this. It is he who knocks on our door hungry, thirsty, a stranger, naked, sick and imprisoned, asking to be met and assisted.”

Pope Francis asked Catholics who have had “the joy” of assisting migrants and refugees to “proclaim it from the rooftops, openly, to help others do the same, preparing themselves to encounter Christ and his salvation.”