Survivors Speak: What Vatican summit must do to stop abuse 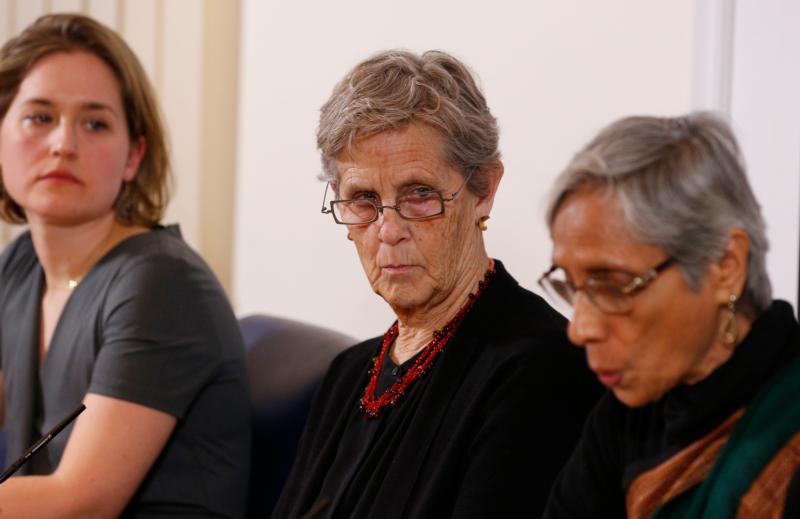 Barbara Dorris, an abuse survivor and former executive director of Survivors Network of those Abused by Priests, center, is flanked by Zuzanna Flisowska, left, and Virginia Saldanha, during a news conference at the Foreign Press Club in Rome Feb. 19, 2019. The event was held to talk about the abuse of women as the Vatican prepares for its Feb. 21-24 meeting on the protection of minors in the church. (CNS photo/Paul Haring)

VATICAN CITY (CNS) — Abuse survivors and support groups were very clear about what they want the world’s bishops, religious superiors, the pope and the Vatican to do to protect children and end clerical sexual abuse.

In fact, the amount of input, insight and recommendations coming out of the various press events organized by survivor and support groups before the Vatican’s Feb. 21-24 summit led Doris Wagner, a former nun who accused a priest of rape, to say, “it might not be the summit of the bishops, but it might be the summit of survivors that makes the difference.”

“So much is at stake this week,” said Anne Barrett Doyle, a researcher and co-director of BishopAccountability.org at a news conference Feb. 19.

“Catholics of the world are grieving and disillusioned,” she said, because “thousands of our children, our brothers and sisters, our friends have been sexually assaulted by clergy for decades now. Popes and bishops have promised, ‘Never again. We’re going to stop it, this time.'”

But what is needed to do that, she and many victims have said, is a clear, universal definition of “zero tolerance” and its full, transparent implementation.

“Canon law has to be changed. Not tweaked, not modified, but fundamentally changed so that it stops prioritizing the priesthood of ordained men over the lives of children and vulnerable adults who are sexually assaulted by them,” Doyle said.

She said she has been “disheartened to hear the pope’s emphasis on this being an opportunity for conversion. You change the laws and then you let the hearts and minds follow. You don’t wait for hearts and minds to change before you prohibit priests absolutely from sexually abusing children.”

Phil Saviano, a board member of BishopAccountability.org, said mandatory reporting of abuse to civil authorities or local law enforcement is very important.

Not turning over abusers is seen not only as a way of “protecting them,” but it suggests the church is “still treating this problem as a sin as opposed to what it really is which is a criminal act against children,” he told reporters in Rome Feb. 19.

Releasing the names and related records of thousands of credibly accused people must be part of the church’s “new era of transparency,” he said in a written statement to summit organizers.

“Do it to break the code of silence,” he wrote. “Do it out of respect for the victims of these men and do it to help prevent these creeps from abusing any more children.”

Declan Murphy, who was abused by two Christian Brothers in Dublin in the 1960s, told Catholic News Service that too often “the church refers more to the ‘sins of the abusers’ and the ‘damage to the church’ rather than the lives of survivors. Until this core and fundamental mindset changes there will be little real change.”

Catholics at every level of the church must take action, he said in an email. Those steps must include:

— Listen to survivors and tell the truth “and see what a difference it makes.”

— Stop putting survivors “through stressful and costly legal technical battles without any attempt to talk, listen and offer some help.”

— Improve child protection procedures and processes while also taking care of those already abused over decades. “There should be services in place to help these people as an automatic right,” Murphy wrote.

Mark Vincent Healy, an Irish survivor and campaigner, told CNS by email that the church must “reach out to survivors providing a true pastoral care program” of support.

Survivors not only face the lifelong nightmare of their past abuse, Healy said. “Survivors of clergy child sexual abuse are overrepresented in the most harrowing social statistics in homelessness, mental health, self-harming, suicide, low income, repeated to long-term unemployment, imprisonment, broken relationships and families, social isolation, shorter life expectancy” and so on.

In fact, his research has shown that, in Ireland, survivors — and not the sexual abusive clergy who abused them — were more likely to have ended up in prison.

Helen L. McGonigle, a retired attorney from Connecticut, said in an email that “all predator priests and their accomplices” must be removed from military bases and installations and not be allowed to minister to military personnel, which is what her and her late-sister’s abuser, Father Brendan Smyth, had been free to do.

She said national security concerns would be at risk with “these kinds of predators,” who were known to have engaged in solicitation in the confessional and had the power to extract “sensitive information under the pretext of the confessional.”

Bishops and other church leaders should be ordered “to cease lobbying efforts against legislative reforms that extend the criminal and civil statute of limitations” on reporting and prosecuting child abuse, she said.

Saviano and Doyle said it is critical that all information and accusations about alleged abuse are flagged and get to the right people in the church. Officials could even do simple searches or set up daily alerts tracking “‘Bishop’ and ‘abuse’ or ‘church’ and ‘abuse,’ it works,” Doyle said.

Just as the Vatican Library collaborated with IBM to digitize its archives, she said, the Vatican “could hire a few researchers to construct a database” that tracks all bishops and priests “who have been reported to the church or reported to the news media.”

Referring to their Massachusetts-based organization — BishopAccountability.org — which makes available several hundred thousand pages of public records and documents online, Doyle said, “if a few people in Boston can do that on a shoestring budget, imagine what the Vatican could do.”

Also contributing to this story were Lian McIntyre and Cindy Wooden in Rome.