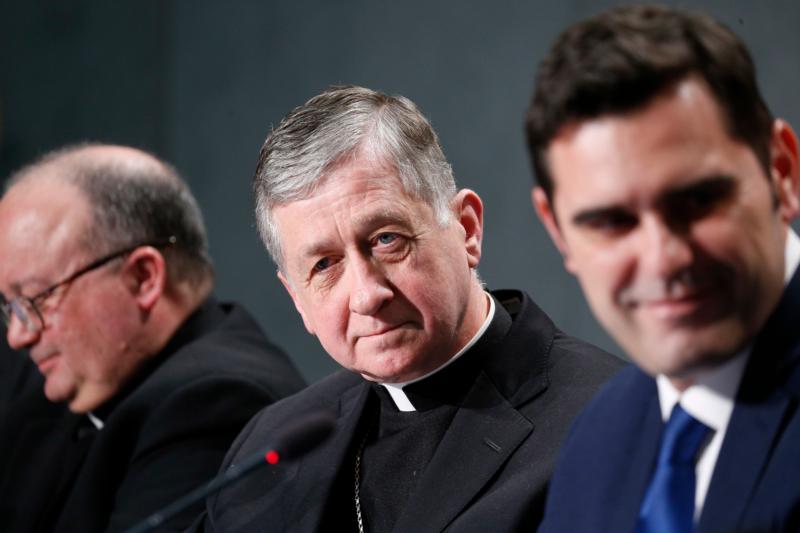 Archbishop Charles J. Scicluna of Malta and Cardinal Blase J. Cupich of Chicago, members of the organizing committee for the Feb. 21-24 Vatican meeting on the protection of minors in the church, attend a press conference to preview the meeting at the Vatican Feb. 18, 2019. Also pictured is Alessandro Gisotti, interim Vatican spokesman. (CNS photo/Paul Haring)

VATICAN CITY (CNS) — When presented with an accusation that a priest has sexually abused a child, “whether it’s criminal or malicious complicity and a code of silence or whether it is denial” on a very human level, such reactions are no longer tolerable, said the Vatican’s top investigator of abuse cases.

Archbishop Charles Scicluna of Malta, who handles abuse cases as adjunct secretary of the Congregation for the Doctrine of the Faith, was part of a panel of speakers at a news conference Feb. 18 to outline the Vatican’s plans and hopes for the summit meeting on the protection of minors in the church.

The meeting Feb. 21-24 was to bring together almost 190 church leaders: the presidents of national bishops’ conferences, the heads of the Eastern Catholic churches, superiors of religious orders of men and women, Roman Curia officials and invited experts and guest speakers.

After reciting the Angelus Feb. 17, Pope Francis publicly asked Catholics around the world to pray for the summit, and he repeated the request Feb. 18 in a tweet, saying he wanted the meeting to be “a powerful gesture of pastoral responsibility in the face of an urgent challenge.”

At the news conference Cardinal Blase J. Cupich of Chicago told reporters, “The Holy Father wants to make very clear to the bishops around the world, not only those participating, that each one of them has to claim responsibility and ownership for this problem and that there is going to be every effort to close whatever loopholes there are.”

Bishops “are going to be held accountable,” the cardinal said.

Cardinal Cupich said he expected the meeting to be “a turning point” in the way the Catholic Church handles allegations across the globe and the way it strengthens child protection policies.

However, like the other speakers, he said it would be unreasonable to expect the meeting to mark a sudden and complete end to the clerical sexual abuse of minors and vulnerable adults.

“We are going to do everything possible to make sure people are held responsible, accountable, and there’s going to be transparency, because those three elements will keep children safe,” the cardinal said.

Both Archbishop Scicluna and Cardinal Cupich insisted that if all church leaders around the world had a full grasp of what is necessary to protect children from clerical sexual abuse, the church also would be in a better position to counter other situations of abuse, including the abuse of vulnerable adults, women religious and seminarians.

While declining to describe if and how he has seen Pope Francis change in response to abuse accusations, Archbishop Scicluna said, “I think that if you are talking about the pope’s experience in Chile,” where he initially insisted allegations against a bishop were slanderous, “I have been impressed by the humility of the Holy Father, his readiness to say, ‘I got that wrong.'”

“That gives us great hope because we leaders need to confront ourselves with prudential judgments that could have been better,” but also need to “move forward,” the archbishop said. “If something has gone wrong, we need to make it right.”

While the summit was not designed to produce a new document, Archbishop Scicluna said a greater awareness of the global reality of the problem and the serious responsibility of every bishop to address it should lead to action around the world.

Participants will share what they learned in Rome with other bishops and religious superiors and begin to take action locally, the archbishop said. “That will need to be audited,” and Pope Francis has asked the meeting’s organizing committee to stay in Rome after the meeting to begin discussing follow-up.

The panel was asked by a correspondent for LifeSiteNews if the summit would address “homosexuality among the clergy” given that so many of the victims of clerical sexual abuse were boys.

Cardinal Cupich said it is clear the majority of clerical abuse cases involve priests abusing boys, but high-level, independent studies, including the John Jay College of Criminal Justice report in the United States and the report of Australia’s Royal Commission into Institutional Responses to Child Sexual Abuse, “indicated that homosexuality itself is not a cause.”

Both studies found that priest abusers had more access to potential male victims and that poor screening of candidates for the priesthood was a greater risk factor for abuse than homosexuality was, he said.

Each of the first three days of the meeting will be devoted to one aspect of the abuse crisis: responsibility, accountability and transparency. Pope Francis and participants will attend a penitential liturgy the evening of Feb. 23 and a Mass Feb. 24, both of which will be livestreamed from the Sala Regia of the Apostolic Palace.

NEXT: Pope lifts suspension imposed on Nicaraguan priest 34 years ago