Bishops’ letter challenges all to see how racism infects America 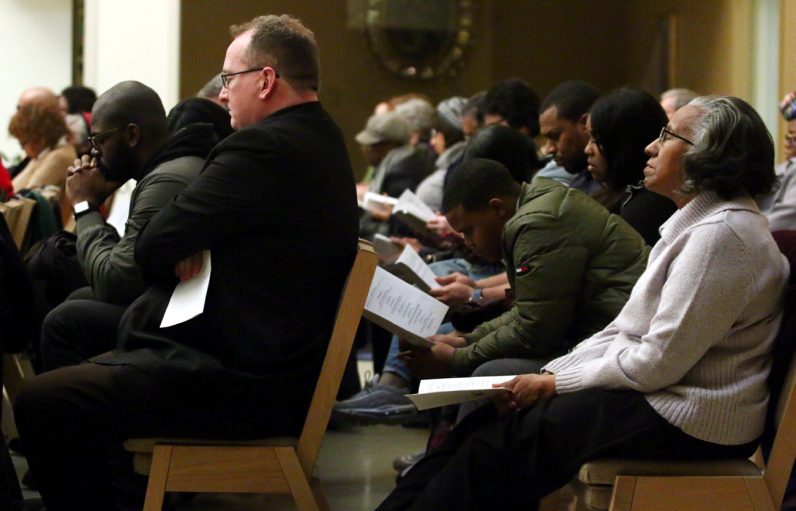 Participants pause for a moment of reflection during the “USCCB Listening Session on Racism” held in the chapel of St. Joseph’s University on Monday, Feb. 25. The sessions being held across the United States coincide with the November 2018 release of the U.S. Conference of Catholic Bishops’ pastoral letter on racism, “Open Wide Our Hearts: The Enduring Call to Love.” (Photo by Sarah Webb)

The goal of the U.S. Catholic bishops in approving the pastoral letter on racism, “Open Wide Our Hearts: The Enduring Call to Love,” was for the church and society to recognize the ways in which the evil of racism profoundly impacts the lives of Americans.

“Despite many promising strides made in our country, the ugly cancer of racism still infects our nation,” read the document, the first such letter on racism since 1979.

It also reflected on the dignity of every human person and stated the church’s moral imperative to combat racism as a “life” issue. It listed African Americans, Hispanics and Latinos, and Native Americans as among the ethnic groups and nationalities that are still affected, while also acknowledging other forms of racial discrimination and hatred.

Also in the pastoral letter, the bishops acknowledged the history of racial crimes in the United States and asked forgiveness for the participation of leaders and members the Catholic Church in this sin, and in enabling or perpetuating structures of injustice.

The bishops called on fellow clergy and Catholics to help change racist attitudes and acts to conform to the moral order established by God, in which men and women of all races are honored as brothers and sisters.

The bishops implored Catholics to work against racism and to support institutional policies and community relationships that will eliminate racial injustices and prejudices. Finally, they encouraged collaboration with fellow Christians and members of other faiths to root out this societal evil.

Consequently, “Open Wide Our Hearts” is a call to action for priests, deacons, religious men and women, parish staff, theologians, educators and catechists, and all the Catholic faithful.

It asks the Body of Christ to give an ever more authentic witness to the Good News of Jesus Christ, grounded in the truth that men and women of all races reflect the goodness of God, in whose image all are made.

NEXT: 40 Days for Life vigils show support for women in crisis pregnancy