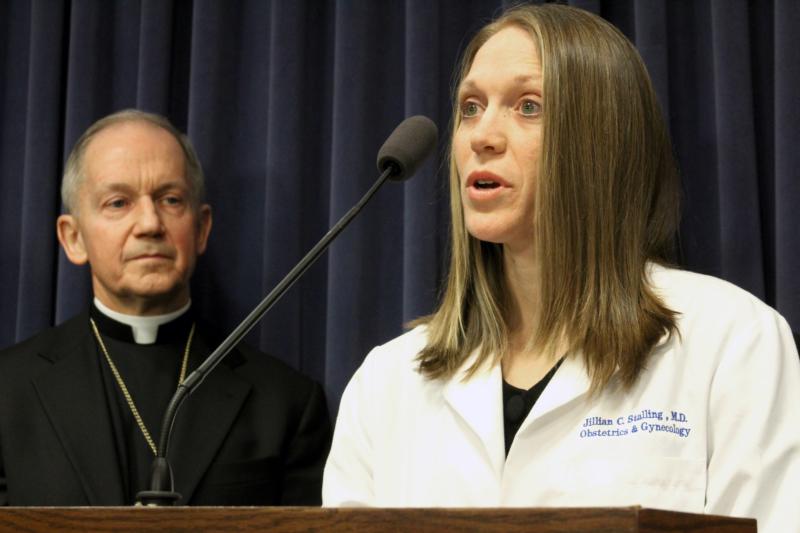 Dr. Jillian Stalling, an OB-GYN with OSF HealthCare, who also serves as the Illinois director for the Catholic Medical Association, speaks March 28, 2019, during a news conference at the Illinois Capitol in Springfield about legislation to expand abortion and eliminate a parental notification law. Looking on is Bishop Thomas J. Paprocki of Springfield. (CNS photo/Jennifer Willems, The Catholic Post)

WASHINGTON (CNS) — The bishops from Illinois’ six dioceses March 28 made a decisive stand against state legislators’ efforts to remove all abortion restrictions in the state, as well as the right of physicians to object to the practice.

At a news conference livestreamed from the Illinois Capitol in Springfield, Catholic Conference of Illinois Director Bob Gilligan told reporters on no uncertain terms that “we are here today to oppose these bills.”

Alongside Gilligan were Chicago’s archbishop and the bishops of Belleville, Joliet, Peoria, Rockford and Springfield, as well as some Catholic health care professionals who practice in Illinois.

The Senate and House bills Gilligan is referring to are S.B. 1942 and H.B. 2495. Either, if passed, would greatly alter current Illinois law. In the text of S.B. 1942 are clauses that “(provide) that a fertilized egg, embryo, or fetus does not have independent rights under the laws of this state” and clauses that “repeal the Abortion Performance Refusal Act,” current law that allows physicians to opt-out of providing abortion provided they have moral objections.

After Gilligan’s introduction, Cardinal Blase J. Cupich of Chicago took the podium, explaining that his approach to human life has remained consistent across all political issues.

“Last year, you may remember, I came here to ask our elected officials to strengthen laws regulating the sale and possession of firearms,” Cardinal Cupich said, claiming that shootings that had happened since then demonstrated “the consequences of prioritizing the unlimited right to own guns over the right to life of human beings.”

He declared his mission on this day was essentially the same: “This morning, I come to question the unlimited right of one human being to end the life of another.”

Cardinal Cupich also took specific issue with the proposed repeal of the Abortion Performance Refusal Act, asking: “Does the state of Illinois really want to become a place where people are forced to do things in their workplace that are against their most deeply held beliefs?”

“Wherever we turn today, we encounter mounting efforts to treat the lives of men, women, and children as mere means to a larger and allegedly more important goal,” Cardinal Cupich concluded. “It is in this context that we must view this proposed legislation as the latest attack on human dignity.”

After the cardinal’s address, remarks were given by Dr. Jillian Stalling, an OB-GYN with OSF HealthCare, who also serves as the Illinois director for the Catholic Medical Association.

Stalling condemned the bill as forcing health care professionals to choose between their conscience or career, and ended on a personal note, revealing her love of the profession: “I love taking care of women and delivering babies. If this legislation passes, I am not going to leave the medical profession … but I will refuse to perform an abortion.”

Mary Beth Miller, nurse director at St. John’s Hospital in Springfield, also stepped up to the podium, relating the miraculous outcomes she has seen in her hospital’s Newborn Intensive Care Unit that could be stifled if the bills pass: “The youngest baby born in our hospital … was delivered at just 22 weeks and six days gestation. … I am stunned at how the proposed legislation … flatly states that an embryo of fetus has no independent rights.”

“We are here when life gets tough and when you have to make difficult decisions” Newbern said, “If we can’t help you, we know who can.”

The House and Senate bills in question have 39 and 14 sponsors in their respective bodies, all Democrats, and have each been referred to at least one committee so far. 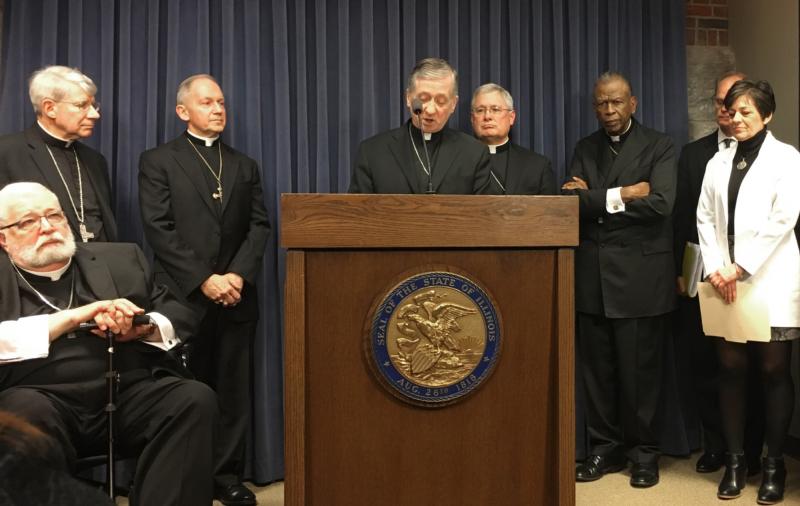 PREVIOUS: Catholics, Muslims urged to work for peace by respecting ‘the other’