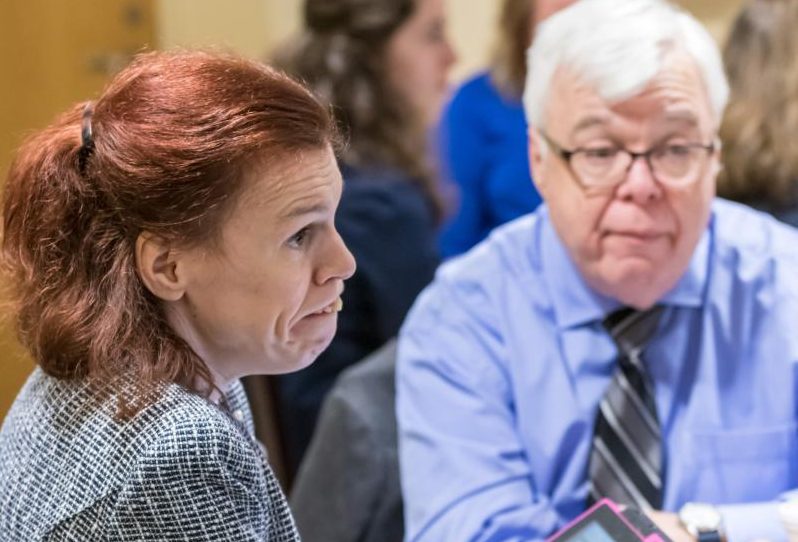 Dawn Teresa Parkot and her father, Sean, discuss why they are opposed to the Aid in Dying bill at the New Jersey Statehouse in Trenton March 25, 2019. Parkot, a quadriplegic motivational speaker with athetoid cerebral palsy, was among dozens of advocates making their voices heard as the bill went to a vote in both chambers of the state Legislature. The bill passed the Assembly 41-33 and the Senate 21-16. (Hal Brown, The Monitor)

TRENTON, N.J. (CNS) — Dawn Teresa Parkot does not mince words when she speaks about the Aid in Dying bill.

“I firmly believe that assisted suicide is homicide and those who assist, regardless of their intentions, are guilty of taking a life just as surely as if they participated in a state-sanctioned execution,” Parkot said, using a computer-based communication system to speak.

Parkot, a quadriplegic motivational speaker with athetoid cerebral palsy, was among dozens of advocates making their voices heard March 25 in the New Jersey Statehouse in Trenton as the Aid in Dying bill went to a vote in both chambers of the state Legislature.

The bill, A.1504/S.1072, passed the Assembly 41-33 and the Senate 21-16 and is currently awaiting Democratic Gov. Phil Murphy’s signature. State residents are being urged to contact the governor and ask him not to sign the bill into law.

Under the legislation, which goes against the Catholic Church’s fundamental teaching on the sanctity of all human life, adults who receive a terminal diagnosis would be allowed to obtain self-administered medication to end their lives.

Advocates argue physician-assisted suicide gives the terminally ill a “death with dignity.” Opponents cite unforeseen consequences, including abuse of power when it comes to those with disabilities; the message it sends to young people and those struggling with depression, and the ability of insurance companies to deny life-saving medications in exchange for those that would take a life.

Trenton Bishop David M. O’Connell has been a vocal opponent, sending a letter Feb. 11 to all state legislators representing the diocese’s four counties.

“Yes, I oppose S.1072 as a Catholic bishop, a priest and a man of faith,” he wrote. “But I also oppose this proposed legislation as a human being and a son.”

Explaining that he sat with his father and mother “until they drew their final breaths,” he said, “My vocation did not make those moments easier to endure. I did not, however, and never will regret that I had the chance to be with them until the natural end of their lives, until their Creator who gave them life called them home.”

He continued, “The practice of medicine purposefully seeks to eradicate illness. Physicians pledge an oath to ‘do no harm.’ Taking a life before natural death violates that vow and there is no turning back. Their duty — and our duty as caregivers and legislators — is to assist those who are facing death, not to kill them.”

Physicians in attendance at the Statehouse agreed.

“I don’t think the bill meets the needs of our patients,” said Dr. Ana Gomes, who practices family medicine in Phillipsburg. “We have hospice services and palliative services that are often underused in the medical community.”

She also stressed that diagnosing a terminal illness is not “simple and absolute.”

“It happens where patients are given a terminal diagnosis but … death does not follow as forecasted,” she said. “Terminality is not an exact science, and we should not pass a bill based on an inexact science.”

Dr. Eddie Fleming, a member of the Catholic Medical Association who practices family medicine in Clinton, said patients have autonomy and dignity under the current legal position on care.

“No patient at the end of life — or at any time — has to undergo any unwanted treatment,” he said. “Additionally, the onus is put on the physician to walk and suffer with the patient — the true definition of compassion.”

Addressing lawmakers, Democratic Assemblyman John Burzichelli, primary sponsor of the bill in the Assembly, said the legislation only affects those wanting to take part in physician-assisted suicide. For those opposed, “nothing changes for you,” he said.

“That’s not true,” murmured Fleming, sitting with other pro-life advocates in the Assembly’s balcony. The bill, he said, could require all physicians to refer patients who wanted to end their lives to such a doctor, meaning all physicians would need to act as facilitators.

“The physician knows what the intention of the second physician will be — to prescribe the (life-ending) medicine — which is tantamount to doing it oneself. So it is, in effect, asking those opposed to participate in physician-assisted suicide,” he said.

Parkot, a University of Notre Dame graduate and the founder of the Climb Organization, which educates the public on life issues with regard to the disabled, worries the bill will allow for abuse of those with disabilities, especially when one’s life is entirely in the hands of a caregiver.

“There is no real way of assuring that those who participate or aid in the process follow all the provisions,” she said. “Coercion to suicide is virtually impossible to prove.”

The Catholic Church in New Jersey has been part of a broad coalition of groups, including medical professionals, patient rights and disabilities advocates, family and pro-life organizations, veterans and other faith-based groups, “who are dedicated to defeating the legalization of assisted suicide,” according to Jennifer A. Ruggiero, secretary of the Metuchen Diocese’s Secretariat for Family and Pastoral Life.

In a March 28 email to Catholic News Service, she said the coalition has been active since the assisted suicide bill “was first introduced in 2012.”

“Lots of hard work was done to help educate our legislators, our fellow Catholics and the general public about the dangers of legalized physician-assisted suicide,” said Ruggiero, who also is director of the Metuchen diocesan Office of Human Life & Dignity. “But despite letter-writing and phone calls opposing the bill and testimony from doctors, nurses and those with disabilities as well as from those in states where it is already legal who have been denied life-saving treatment and offered life-ending drugs instead, the proponents of this measure finally prevailed.”

Those put at “grave risk” by assisted suicide, she said, are the state’s most vulnerable populations — those with disabilities, the elderly, veterans and those battling prescription drug addiction.

The measure’s passage “is more evidence that the sanctity of life is under brazen attack in our country,” Ruggiero told CNS. “As Catholics, we will continue to support increased access to palliative care — comfort care — so that patients can live each final day with dignity. We will continue to reject this dangerous national movement toward physician-assisted suicide and work together to find a life-affirming response to this deadly act.”

Mauro is managing editor of The Monitor, newspaper of the Diocese of Trenton.