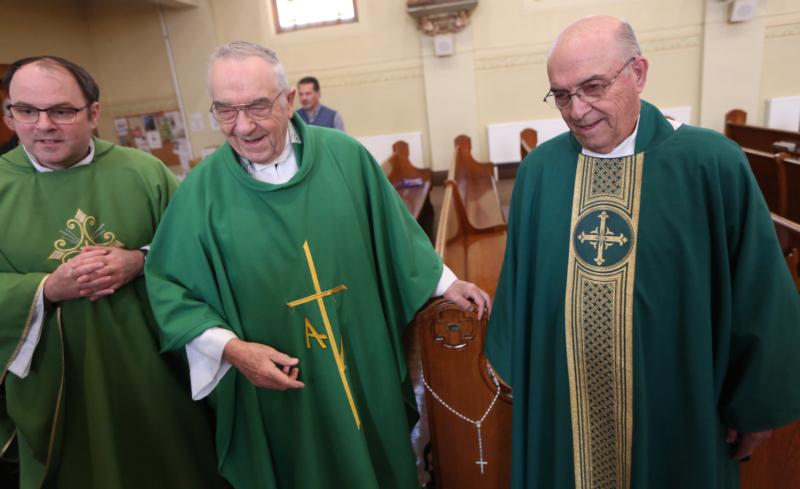 NEW TRIER, Minn. (CNS) — For 60 years of priesthood, no amount of snow has stopped Fathers Leonard and Martin Siebenaler from celebrating Sunday Mass at their respective parishes.

“They didn’t ever let a blizzard stop them from getting to church (even if) they had to load up a sleigh to get here,” said Father Cole Kracke, a second cousin of the priests and pastor of the brothers’ hometown parish, St. Mary’s in New Trier.

A Mass to mark the brothers’ milestone anniversary was celebrated at St. Mary’s Church — and the day was marked by a snowstorm.

“It was kind of interesting that today was a day where they probably could have used a sleigh,” added Father Kracke, 44.

Fathers Leonard and Martin concelebrated the Feb. 24 Mass, which took a hit in attendance from the snow and strong winds. Archbishop Bernard A. Hebda of St. Paul and Minneapolis had planned to attend, but Father Martin encouraged him not to come because of the weather. He extended greetings from the archbishop to those in attendance.

But about 125 people attended the Mass and reception, including three of the brothers’ six living siblings: Raymond, Edward and Donna Neisen.

“What’s most amazing is how quickly the last 10 years went by. It seemed like just the other day we celebrated 50 years,” said Father Leonard, 85.

Retired since 2002, Fathers Martin and Leonard live in Hastings and serve there as chaplains for Regina Hospital and at Regina Senior Living, where they held another anniversary celebration Feb. 26.

“We are helping out part-time on a volunteer basis. Several Masses every week,” Father Martin, 86, told The Catholic Spirit, the archdiocesan newspaper.

The brothers grew up on a dairy farm and attended the parish’s school, now closed. Their parents, Mathias and Christine, placed them in the same grade.

St. Mary’s pastor at the time, the late Father Peter Schirmers, encouraged the brothers’ vocations, as did the principal at the school and School Sisters of Notre Dame serving there. Mathias and Christine supported it, too.

“They were OK with it even though they were losing a couple of farmhands,” Father Leonard said.

Mathias and Christine also supported the vocations of a younger brother, Father John Siebenaler, a retired archdiocesan priest who was ordained two years after his brothers. A sister, Therese Siebenaler, lived in religious life for a decade.

Four vocations from the Seibenalers’ nine children did leave work to be done on the farm by those who remained, said Edward, 75.

“That was a big hole in the family when they left,” he said.

But vocations run in the family. Three great aunts were religious sisters. A great uncle, Father John Gores, served as a priest for the archdiocese and, later, the New Ulm Diocese after it formed in 1958.

In addition to attending elementary school in the same grade, the brothers together attended high school at the now-closed Nazareth Hall Preparatory Seminary and St. Paul Seminary, both in St. Paul.

“I think we supported each other for the seminary years,” Father Leonard said. “As a priest, we’d call each other on occasion just to ask for advice or something of that nature.”

“We had early ordinations those years due to many, many baby boomers whose confessions we had to hear and help out in parishes for those last three months of our studies,” Father Martin said. “We were ordained three months earlier due to the lack of priests for all the population out there to be served.”

Edward said the 60th anniversary Mass brought back memories of his brothers’ first Masses of thanksgiving at St. Mary.

“I think I was an altar server for one. I was in the choir for the other,” said Edward, who was a teenager at the time.

The brothers began their first assignments as assistant priests in the summer of 1959. After about 10 or 12 years, they became pastors. Between the two of them, they served at about a half dozen parishes. When they retired, Father Martin was pastor of St. Joseph in Waconia and Father Leonard was pastor of St. Michael in the town of St. Michael.

Father Martin said ministering to families in the wake of tragedy stood out to him. That included helping families who lost sons fighting in Vietnam.

“Those funerals are so impressive to a priest, and capable of giving much comfort and strength to mourners,” Father Martin said.

After retiring, the brothers returned to the area where they grew up, and they continue to serve in the community.

The “increasing graces” from daily Mass helps them to keep ministering even in retirement, Father Leonard said.

NEXT: Researcher: Difference between ‘considering leaving’ and ‘leaving’ church