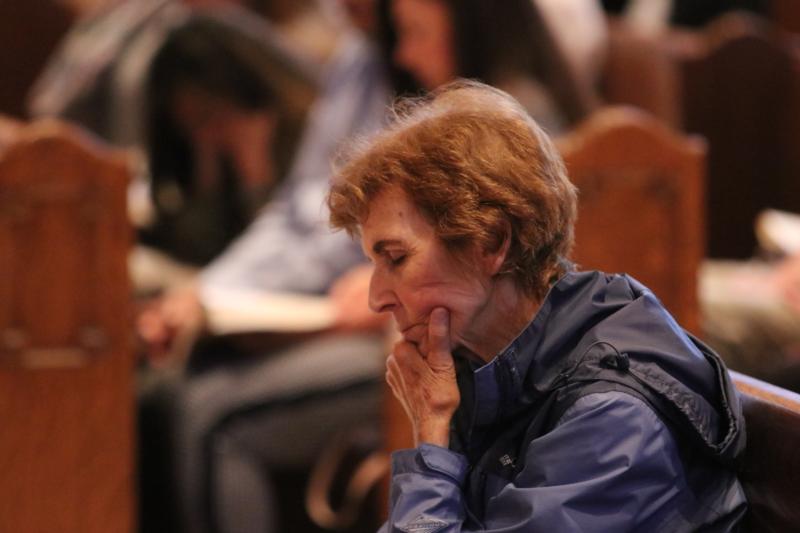 A woman prays during a Mass for victims and survivors if clergy sex abuse at St. Mary Cathedral of the Immaculate Conception in Portland, Ore., Aug. 26, 2018. According to a March 13 Gallup poll, 37 percent of U.S. Catholics say the clergy abuse scandal has led them to question if they will remain Catholic. (CNS photo/Ed Langlois,Catholic Sentinel)

WASHINGTON (CNS) — The headlines from a March 13 Gallup Poll about the growing number of U.S. Catholics who have thought about leaving the church because of the clergy abuse crisis did not faze one researcher of Catholic data too much.

“There is a substantial difference between considering leaving and leaving. It is also the case among those who do leave, some come back,” said Mark Gray, director of Catholic polls and a senior research associate at Georgetown University’s Center for Applied Research in the Apostolate, or CARA.

“When you think about the question about considering leaving, I am frankly surprised the percentage isn’t higher. Given the realities of the scandal I think it is natural to ask oneself questions about membership and identity,” he told Catholic News Service in a March 14 email.

The Gallup Poll revealed that 37 percent of U.S. Catholics, up from 22 percent in 2002, said the abuse scandal in the church has led them to question whether they would remain Catholic.

The poll’s results are based on interviews with 581 U.S. Catholics from Jan. 21 to 27 and Feb. 12 to 28. Gallup conducted a similar poll in 2002 after The Boston Globe reports on clergy abuse gained widespread attention.

In this new poll, responses from practicing Catholics differed from the overall Catholic population.

The same pattern existed in 2002, but this year more practicing and nonpracticing Catholics said they were likely to question their place in the church. Seventeen years ago, only one in eight weekly Massgoers asked this question compared to 24 percent of semi-regular Massgoers and 29 percent of those who seldom attend Mass.

The report indicates, although this seemed to get lost in some of the coverage of it, that the responses to the poll don’t reveal if “Catholics who are questioning their church membership will actually decide to leave the church. Many Catholics may consider leaving the church but ultimately decide not to do so, or they may have no intention of leaving” but are responding to the question out of frustration with how the church has responded to this crisis.

A tweet posted by CARA March 13 suggested that Gallup track the number of U.S. adults who identify as Catholics by the end of 2019, noting: “In the past, most who considered leaving didn’t and among those who did, some returned.” It said if the number of U.S. Catholics falls below 21 percent that would be “outside the post-1948 norm.” In 2000, the percentage of Catholics in the U.S. was 23 percent and last year it was 22 percent.

Gray, who takes the long view, said that “religious identity and affiliation is much more nuanced over the course of a lifetime than many assume.”

He also pointed out that most Catholics are recognizing that the abuse crisis is “not a current event but the scandal is. They are also likely to realize that there is a difference between their faith and the individuals who committed these awful crimes.”

But Gray also cautioned that “something feels different about the current situation than in 2002.” “It’s almost as if this is a second strike” and any further scandal related to sex abuse could have a stronger impact on church membership, he added.

But the poll showed that Catholics are less confident overall about priests, U.S. bishops and other Catholic leaders. About one in four U.S. Catholics said they have very little or no confidence in those two groups.

Catholics who go to Mass each week are the most confident in priests and church leaders in general and infrequent Massgoers are the least confident. The widest gaps in confidence appears at the parish level with 86 percent of weekly Massgoers expressing confidence in their own priests, compared with 39 percent of those who seldom or never attend church.

The Gallup Poll, which questioned adults throughout the country via landline and cellphones, has a sampling error of plus or minus five percentage points.

PREVIOUS: Brother priests mark 60th year of ordination with Mass — and a snowstorm