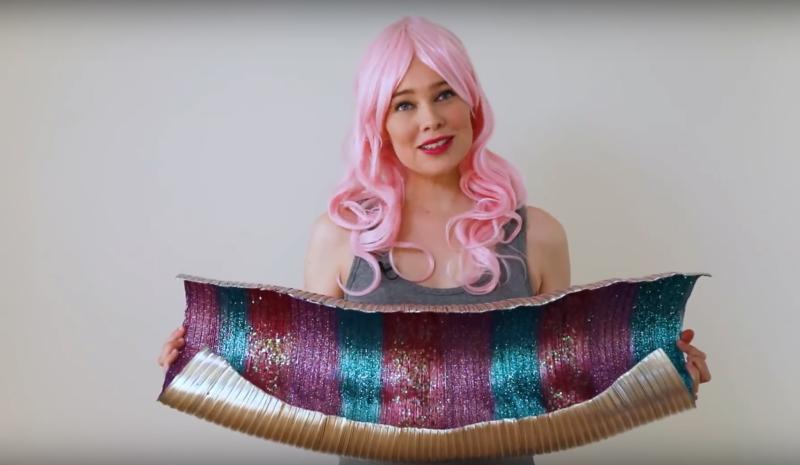 This is a screenshot from a video from the pro-life organization CHOICE42 (Choice for Two) showing a woman holding a multicolored, sparkly tube representing “the magical birth canal” and, with tongue in cheek, asserts that babies attain their human rights only after successfully passing through it. The video currently has more than 1.2 million views on Facebook. (CNS photo/CHOICE42)

SAN DIEGO (CNS) — It’s not your typical pro-life organization that puts out a video with a pregnant woman wearing a pink wig and, at one point, even sporting a pair of purple fairy wings as she mocks talking points made by the “pro-choice” movement.

But perhaps that’s why CHOICE42 (Choice for Two) is so unique.

In that video, which currently has more than 1.2 million views on Facebook, the woman holds a multicolored, sparkly tube representing “the magical birth canal” and, with tongue in cheek, asserts that babies attain their human rights only after successfully passing through it.

Speculating as to what might be responsible for the “amazing” transformation of the purportedly non-human fetus into a fully human newborn, she shares that “popular scientific theories include fairies, aliens or, of course, a mini-Big Bang.”

The star of this viral video and others produced in a similar vein is Laura Klassen, 33, founder and director of CHOICE42. The grassroots organization’s name serves as a reminder that a mother’s abortion decision directly affects two lives. Based in Canada, CHOICE42 has pioneered a younger, hipper, edgier approach to the pro-life message.

(Watch a video below.)

“Basically, whenever there’s any pro-choice slogan that’s going around … we make videos as though from that side’s point of view, just to show how ridiculous a lot of these things are,” Klassen said in a telephone interview with The Southern Cross, newspaper of the Diocese of San Diego.

She explained that CHOICE42 uses satire to “flip (pro-choice) arguments on their head” and to convey serious truths in a “funny and lighthearted” way.

Another of CHOICE42’s videos sees Klassen shushing a male co-star, bluntly informing him that his lack of a uterus precludes him from taking a position on abortion. (“It’s like with any human rights violation. If you’re not directly involved, then you can’t have an opinion,” she says in that video, deploying sarcasm against a common argument of abortion supporters.)

Yet another video mocks the old canard that the pro-life community stops caring about children once they’re born by showing two pro-lifers breaking in to a pregnancy resource center under cover of darkness and committing what Klassen describes as “a reverse robbery”: leaving boxes of diapers for the clinic to give away for free to any mother who needs them.

The videos have generated a lot of positive feedback, and Klassen has seen them subtitled and dubbed for foreign audiences. Last summer, some Argentine pro-life activists even re-created, scene for scene, her “Magical Birth Canal” video as part of their campaign against a bill that would have legalized abortion in their country.

Of course, there have been negative reactions, too.

Some have come from members of the pro-life community who failed to recognize the satirical nature of the videos and misinterpreted them as being for abortion, said Klassen. Others have come from supporters of abortion, including one man who left a “quite awful” comment that a then-pregnant Klassen should be kicked in the abdomen.

“Who even writes that publicly?” asked Klassen, who said that her videos also have been flagged and blocked on several occasions on Facebook.

Before starting CHOICE42, Klassen had long been passionate about the pro-life cause. Growing up in a Christian family, she believed from an early age that abortion was immoral. She remembers participating in a pro-life event as a young child and seeing a graphic abortion image that she was never able to shake.

“As a child, if you see that kind of thing, you just know it’s wrong,” said Klassen, who did a school project on abortion almost every year, chose the issue as a debate topic in high school, and began volunteering at her local pregnancy resource center while attending college.

About three years ago, Klassen founded CHOICE42 to provide what she saw as the “missing piece” in Canada’s pro-life movement: a central location to which pregnant women could turn to find a comprehensive listing of the many resources available to them.

CHOICE42 prides itself on hosting Canada’s largest database of such support services — everything from crisis pregnancy centers to adoption agencies to post-abortion recovery organizations.

Klassen also saw that many of her fellow Canadians seemed unaware that their country allows abortion at any stage of pregnancy, without any legal restrictions. So, CHOICE42 also became a vehicle for raising awareness and shifting public opinion.

Inspired by companies that were producing “these really short, quirky, funny videos” that were being shared across the internet, Klassen said CHOICE42 began producing its own. And that’s what really put the organization on the map.

CHOICE42 remains a fairly small outfit. It’s a team of four women, including Klassen, ranging in age from their early 20s to their early 40s. None of them receive any pay for their work.

Though optimistic about the pro-life cause’s prospects for success and already seeing some promising trends, including several new pro-life groups being started by younger people, Klassen challenges those who oppose abortion to get more involved.

“‘Pro-life’ is a verb,” she said. “It’s something that you need to be actively doing. If you’re just sitting in your house, thinking that you’re pro-life, there are babies being killed, so basically you’re useless.

“You need to be out there,” she said, explaining that she’s not telling people to follow her lead and start their own pro-life organization, but simply to check out their local pregnancy resource centers, adoption agencies and maternity homes and find out what they can do to support them.

“We should be making a huge noise about (abortion),” she said, “because it’s a genocide in our own country.”