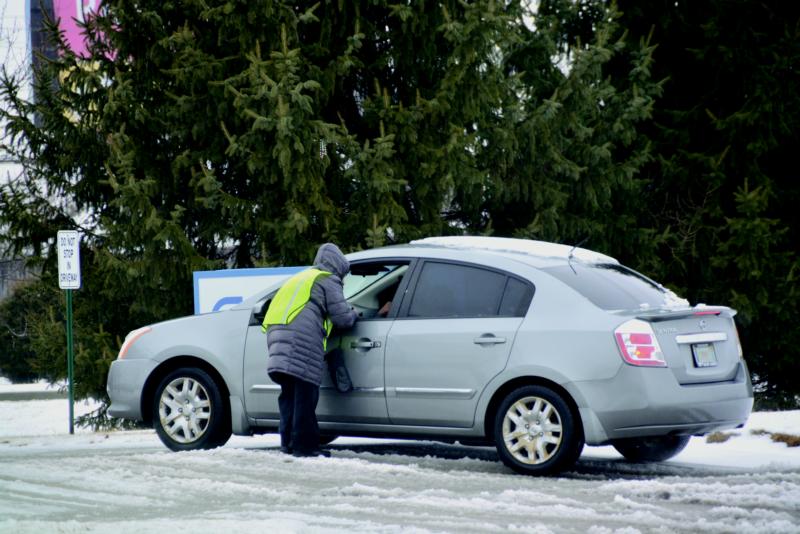 Sidewalk counselor Sheryl Dye speaks with a person pulling into the driveway at the Planned Parenthood abortion center in Indianapolis Feb. 20, 2019, a day when abortions are performed at the facility. (CNS photo/Natalie Hoefer, The Criterion)

INDIANAPOLIS (CNS) — Two women stood near the busy road on a chilly February morning in Indianapolis. A steady, penetrating mist — and sometimes an icy splash from a speeding car — made for a dampness that digs deep and lingers despite layers of clothes. The temperature hovered just above freezing.

By “here” she meant the entrance of the driveway of the Planned Parenthood abortion facility on the northwest side of Indianapolis. It is the state’s largest abortion provider.

Dye and Clawson are committed to standing, praying and hailing approaching cars with a wave and a smile for at least two hours there every Wednesday morning.

They are members of the Indianapolis North chapter of Sidewalk Advocates for Life. Per its website, the organization’s mission is to train and support volunteers “to be the hands and feet of Christ, offering loving, life-affirming alternatives to all present at the abortion center, thereby eliminating demand and ending abortion.”

Dye and Debra Minott established the chapter in 2016 and currently serve as its coordinators.

Sidewalk counselors have been there for 13 years, since the facility opened in 2006, said Dye, 54. “It started as a grass-roots effort. … Deb and I used to counsel together. We started talking about the need for more comprehensive training and getting more people involved. Sidewalk Advocates has a great training program.”

Each chapter designates the abortion facility it will cover. A chapter also exists in Bloomington, covering the Planned Parenthood abortion center near Indiana University.

Being a sidewalk counselor does not require any kind of degree or persuasive ability, said Minott, 63, told The Criterion, newspaper of the Archdiocese of Indianapolis.

“First and foremost (it requires) a very strong faith,” she said. “Because to be successful, you need to recognize you are an instrument of the Holy Spirit, and it’s not anything you’re doing.

“Second is a passion for life. If you’re not there believing that this is a life to be saved, it’s going to come through to the person you’re talking to.”

Having “thick skin” is needed, too, “because some of the things people say aren’t very nice,” admitted Minott, a member of St. Marie Goretti Parish in Westfield, Indiana, in the Diocese of Lafayette.

Both agree on several misconceptions about what sidewalk counselors do — that they are there to yell and protest against the abortion center, or there to shame the women as they drive in.

“No matter what is said to us, no matter what goes on, we are peaceful, loving sources of hope,” said Dye, a member of St. John the Evangelist Parish in Indianapolis. “Our goal is to let (the women) know there’s help, that there’s pain that can come with abortion, and that they’re better than that and don’t have to experience that.”

One might say the counselors’ first goal is to get a car to stop.

“We just wave and offer a big smile and make eye contact,” Dye said of the counselors’ approach to cars entering the drive.

“There are times when you get no one to stop, then sometimes you get eight cars to stop” during the two- to two-and-a-half-hour shifts, Minott added.

When a car does stop, a counselor offers the driver brochures and information on alternative pro-life organizations that will help them at no charge. For instance, 1st Choice for Women is a pregnancy clinic less than a mile from the abortion center. It is a ministry of Great Lakes Gabriel Project, which also sponsors the north Indianapolis Sidewalk Advocates chapter.

Counselors also offer to walk over immediately and meet the woman at the Women’s Care Center that abuts the north boundary of the Planned Parenthood property.

“Even if I talk to someone for a minute — and that’s really about all the time you have — and they still go in (to the abortion center), I believe my prayers have an impact,” Minott said of what counselors spend most of their time doing by the drive: praying.

Counselors often use a rosary booklet with tailor-made intentions Minott designed. But with volunteers from different faith backgrounds, any and all prayers are welcome, she said.

“If I didn’t have faith that being there praying was having an impact, I couldn’t go on doing it because there’s just not enough tangible rewards coming back to you,” Minott said.

Occasionally there are tangible rewards, though. Dye told the story of a woman who stopped not long ago to talk to a specific counselor.

“This woman said she had been driving up and down Georgetown Road for a year trying to find the counselor,” Dye said. “She wanted her to know that even though she went on in for her abortion after the counselor talked with her, she changed her mind, and she was now the mother of a healthy baby boy.”

At 69, Larry Clark has been a sidewalk counselor at the Planned Parenthood abortion center in Indianapolis for about 10 years. He, too, knows the joy of seeing a woman choose life for her baby.

“I’ve got to be here — it’s the right thing to do,” said Clark, a member of Our Lady of Mount Carmel Parish in Carmel, Indiana, in the Lafayette Diocese. “(The clients) need somebody — not only the children, but the moms and dads need us, too. … There’s nothing more cheering and exciting than when someone chooses life here in this driveway.”

Dye and Minott agree the mission of sidewalk counselors has become more urgent.

Dye said that in the six years since she’s been a counselor outside the abortion facility, “it’s getting harder to get (the women) to see that it’s something that could potentially cause harm to them. It’s hard because society tells them it’s no big deal.”

And with only 13 full-time sidewalk advocates, about 10 part-time and substitute volunteers, and the need to always have two counselors on each shift, the task is even more challenging, said Minott.

There is no “typical” counselor, said Dye, who is the mother of two grown children and a teacher at Lumen Christi Catholic School in Indianapolis.

Minott also is married with two grown children. She is retired, running for the Carmel City Council, and has “a lot of other things going on.”

Clawson, a retiree in her mid-60s who also worships at St. Maria Goretti, is in her third month of volunteering.

She had a “save” on her first day of counseling — a woman she spoke with who decided to go to the Women’s Care Center instead of Planned Parenthood.

“That’s like being on cloud nine,” she said with a smile. “Those are the things that keep you coming.”

NEXT: Kansas archbishop responds to criticism over school not enrolling child