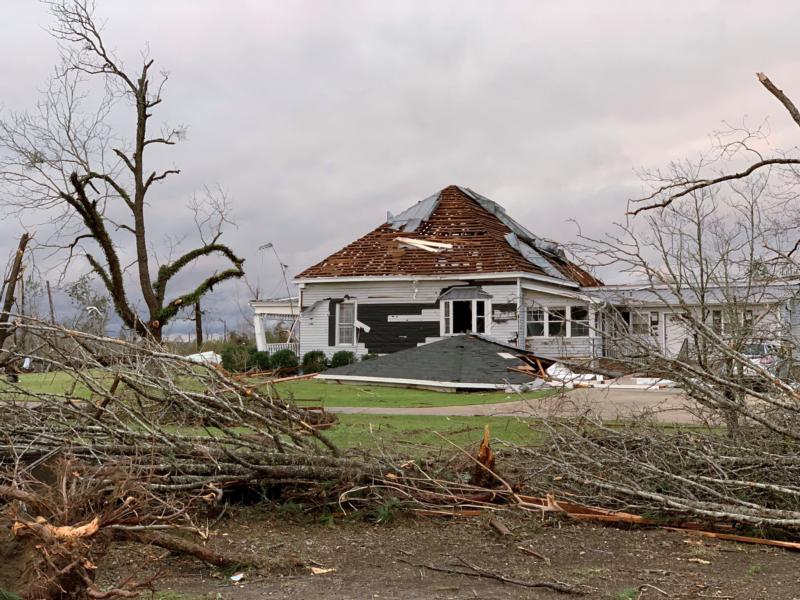 Debris and a damaged house are seen following a tornado in Beauregard, Ala., March 3, 2019. At least 23 people were confirmed dead in Lee County, Ala. (CNS photo/Scott Fillmer via Reuters)

UPDATED – WASHINGTON (CNS) — The president of the U.S. Conference of Catholic Bishops and the chairman of the USCCB domestic policy committee joined in expressing sorrow for those in Alabama mourning lives lost in a violent tornado that whipped through the region March 3.

“It is with heavy hearts that we continue to learn about the destruction,” the Catholic leaders said in a statement released late March 6.

As of March 7, fatalities in Alabama remained at 23, and USA Today reported that anonymous donors have now offered to pay for their funerals. The victims ranged in age from 6 to 89.

Sheriff Jay Jones in Lee County, where the tornado hit ground in the town of Beauregard, said that the number of those unaccounted for had been reduced to a handful. About 50 people were injured.

“We offer prayers for the victims and their grieving families and friends,” Cardinal DiNardo and Bishop Dewane said. “Now is the time to offer assistance in any way we can to those facing great difficulties. One way to do this is by donating to Catholic Charities and other organizations that are working to provide emergency needs, and to help rebuild.”

In a telegram to Archbishop Thomas J. Rodi of Mobile, Alabama, Cardinal Pietro Parolin, Vatican secretary of state, said March 3 that Pope Francis was “deeply saddened to learn of the tragic loss of life and the injuries caused by the tornado” and expressed his “heartfelt solidarity with all affected by this natural disaster.”

“He prays that Almighty God may grant eternal rest to the dead, especially the children, and healing and consolation to the injured and those who grieve,” the cardinal said, adding that the pope invoked “the Lord’s blessings of peace and strength.”

The day after the tornado whipped through Alabama and other parts of the South, Archbishop Rodi asked for prayers for those who died, for their families and for “those who have lost homes and businesses.”

“The catastrophic tornadoes which occurred yesterday in the Archdiocese of Mobile have brought loss of life and devastating damage,” the archbishop said in a March 4 statement.

He added that archdiocesan Catholic Social Services was reaching out to the pastors of the affected areas to offer assistance for those in need.

“Our hope, in this Lenten season, as always, is in the Lord of life who has conquered death,” Cardinal DiNardo and Bishop Dewane said in their joint statement. “May the Lord grant eternal rest to those who have died, and may the Holy Spirit work through all of us to give comfort to those who are grieving with generosity and love.”

The National Weather Service’s Chris Darden said the tornado that hit Lee County clocked in at 170 mph. It created a swath a mile wide and 70 miles long.

President Donald Trump has approved disaster funds for the area and plans to visit tornado victims.

The tornado that ravaged Lee County was one of 18 that struck Alabama, Florida, Georgia and South Carolina.

“It’s extremely upsetting to me to see these people hurting like this and the families who have lost loved ones,” the sheriff said in a Weather Channel report. “This is a very tightknit community. These people are tough. They’re resilient people, and it’s knocked them down. But they’ll be back.”

He described the devastation as shocking, adding: “It looks almost as if someone took a giant knife and just scraped the ground. There are slabs where homes formerly stood, debris everywhere, trees snapped, whole forested areas where trees are snapped and lying on the ground.”

Editor’s Note: Donations for tornado victims can be made to Catholic Charities USA at https://catholiccharitiesusa.org.

NEXT: Palms to ashes: A few things to know about Ash Wednesday