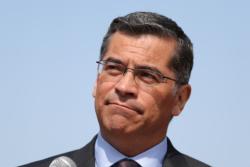 SAN FRANCISCO (CNS) — California Attorney General Xavier Becerra filed suit March 4 in U.S. District Court in San Francisco to block the Trump administration’s “Protect Life Rule,” which prevents funds provided under the Title X Family Planning Program from being used in services that include abortion as a method of family planning or that make abortion referrals.

He filed suit the day the rule was published in the Federal Register. It goes into effect 60 days after its publication.

Twenty states and the District of Columbia were filing a joint suit against the new rule March 5 in U.S. District Court in Eugene, Oregon.

Becerra’s suit and the multistate suit both seek a court injunction to stop the rule from taking effect.

“Contrary to pro-abortion misinformation, the ‘Protect Life Rule’ does not cut Title X funding by a single dime — it simply enforces the existing statute that draws a bright line of separation between abortion and family planning,” Marjorie Dannenfelser, president of the Susan B. Anthony List pro-life organization, said in a March 4 statement.

The Office of Population Affairs, which is part of the U.S. Department of Health and Human Services and oversees Title X, published the draft final rule the afternoon of Feb. 22.

It bars Title X grant money from any clinic that performs abortion, which will especially impact Planned Parenthood, the nation’s largest abortion provider. According to the organization’s website, Planned Parenthood affiliates receive roughly $70 million in Title X funds and serve about 41 percent of those who benefit from Title X funding.

The new rule requires “clear financial and physical separation between Title X funded projects and programs or facilities where abortion is a method of family planning.”

“This separation,” it says, “will ensure adherence to statutory restrictions, and provide needed clarity for the public and for Title X clinics about permissible and impermissible activities for Title X projects.”

The chairman of the Committee on Pro-Life Activities of the U.S. Conference of Catholic Bishops praised the Trump administration for the rule, saying that by its action, it reaffirmed that abortion “is not family planning.

Archbishop Joseph F. Naumann of Kansas City, Kansas, said in a Feb. 27 statement: “Abortion ends the lives of families’ most vulnerable members, as well as damaging the spiritual, mental and physical health of mothers.”

“Although the USCCB continues to have strong objections to government promotion and funding of contraceptives, we have long supported enforcement of the abortion funding restrictions in Title X, and we are pleased to see that the administration has taken seriously its obligation to enforce those restrictions,” he added.

In May 2018, President Donald Trump said his administration would reinstate Reagan-era regulations to prevent funds appropriated under Title X from being used in programs that include abortion as a method of family planning or that make abortion referrals.

The restrictions were put in place in 1988 by President Ronald Reagan. Planned Parenthood of New York City immediately challenged the rules, claiming the denial of public funds violated their constitutional rights of free speech because the rules included a prohibition on abortion referrals.

With the “Protect Life Rule,” Trump and HHS Secretary Alex Azar “acted on the will of the American people by disentangling taxpayers from the big abortion industry,” Dannenfelser said. “Similar regulations have already been upheld by the Supreme Court and we are confident the Trump administration will prevail.”