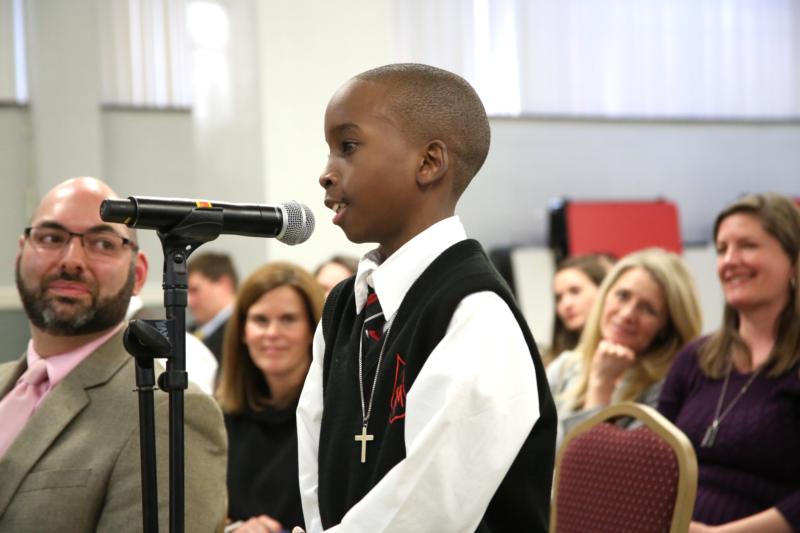 Calique Barnes, a sixth-grader at St. Thomas More Catholic Academy in Washington, comments during a congressional hearing on the D.C. Opportunity Scholarship Program that was hosted by his school Feb. 26, 2019. (CNS photo/Javier Diaz, Catholic Standard)

WASHINGTON (CNS) — This time, the U.S. Capitol came to students on a field trip.

St. Thomas More Catholic Academy — in a Washington neighborhood about five miles from that national landmark — hosted a Feb. 26 congressional hearing to mark the 15th anniversary of the D.C. Opportunity Scholarship Program.

Since its inception in 2004, the only federally funded school voucher program has awarded 10,701 scholarships to kindergarten through 12th-grade students from low-income families, giving them the opportunity to attend the school of their choice.

The gathering not only provided St. Thomas More students with a novel afterschool activity that unfolded in their cafeteria, but it also offered a forum where two U.S. senators, a scholarship recipient, a school administrator and parents gave heartfelt testimonials on the program’s impact in changing the lives of students and their families.

“When parents have a choice, their kids have a chance,” said Sen. Tim Scott, R-South Carolina, who was the first witness to testify at the hearing of the U.S. Senate’s Committee on Homeland Security and Governmental Affairs.

Witnesses sat at tables set up on a stage in the school and parish’s Cedar Room. The audience included students and parents whose families have received the D.C. Opportunity Scholarships, along with officials from several schools and other guests.

The hearing on “The Opportunity to SOAR: 15 Years of School Choice in D.C.” was led by the committee’s chairman, Sen. Ron Johnson, R-Wisconsin.

Scott and Johnson, along with Sen. Dianne Feinstein, D-California, in January introduced legislation to reauthorize the Scholarships for Opportunity and Results Act for the next five years, with companion legislation introduced in the House by Rep. Mark Walker, R-North Carolina. The program is known as SOAR.

Scott said supporting the D.C. Opportunity Scholarships was not a Democratic or Republican issue.

“This is truly an American issue,” he said. “My hope is we can move this bipartisan legislation to the finish line,” which he said would enable students to benefit from the scholarships for years to come.

The scholarship program was launched 15 years ago with bipartisan support from D.C. and congressional leaders, and features a three-sector approach providing equal additional federal funding to support public, charter and nonpublic educational choices for children in the city. The legislation also has required strict accountability measures for nonpublic schools attended by the scholarship recipients.

When the new legislation was introduced, Johnson noted, “The Opportunity Scholarship Program has helped students from low-income households attain a graduation rate 21 percentage points higher than comparable students. The fact that twice as many children apply for the program as can be accommodated shows how strong demand is from parents seeking such positive results for their children.”

According to a fact sheet provided by Serving Our Children, which administers the scholarship program, 3,294 students applied for the Opportunity Scholarships for the 2018-2019 school year, and the scholarships were awarded to 1,645 students.

The average annual income for families receiving the scholarships was $23,285, and 43 percent of the families received nutritional or other government assistance. Nearly three-quarters of this year’s scholarship recipients are African-American and more than 17 percent are Hispanic.

Serving Our Children noted that for the 2017-2018 school year, nearly 90 percent of the scholarship program’s graduates planned to attend college, and another 5 percent were entering the military or a technical school. That year, 94 percent of parents of these students expressed satisfaction with the program.

Several studies over the years have shown the scholarship beneficiaries have higher reading scores than their peers, which is a key indicator for educational achievement. Advocates have contended that without the scholarship program, nearly all these students would be zoned for a public school designated to be in need of improvement.

Rosio Gonzalez, president of the Archdiocese of Washington’s Consortium of Catholic Academies — a network of four Catholic schools in the city including St. Thomas More — welcomed the participants and guests to the hearing.

“The reauthorization of the SOAR Act provides our families with the ability to achieve their dreams and become successful in high school and beyond,” said Gonzalez.

In his testimony, Scott said that as someone who was raised in poverty in a single-parent household and attended four different schools by the time he was in the fourth grade, now as a U.S. senator he believes passionately in fighting for students whose educational opportunities are limited.

“You deserve the chance to prove your mettle,” he said to the students attending the hearing.

Noting the program’s success, Scott said students are being equipped to be leaders and meet the challenges of today and tomorrow. “I’m excited about the lives you’ll lead,” he said, adding that he hopes such programs can expand to every ZIP code.

That point was echoed before the hearing by Johnson, who said in an interview, “We do want to make sure that every American has the opportunity to choose an education that works for them. I’d like to see every child have this opportunity.”

According to the American Federation for Children, 25 states plus the District of Columbia now have private school choice programs, which include vouchers, scholarship tax credits, educational savings accounts and special needs scholarships.

Scott also noted cost savings connected to the program. According to Serving Our Children, the D.C. Opportunity Scholarships provide up to $8,857 for kindergarten through eighth-grade students and $13,287 for high school students. The average D.C. public school cost per pupil is $19,117, excluding capital costs.

Both senators noted the importance of parents and students advocating for the program by sharing their stories with local and national legislators.

During a question-and-answer session with Scott, a mother noted proudly how her son, a scholarship student, will be graduating from Jesuit-run Gonzaga College High School in D.C. this spring. “You are living the dream,” the senator replied.

Also testifying was K. Marguerite Conley, formerly the executive director of the Consortium of Catholic Academies and principal of Annunciation Catholic School in Washington.

“Every parent and guardian wants his or her child to have a bright and successful future — often one better than he or she had,” Conley said. “For many parents and guardians in D.C. this means higher quality educational opportunities outside of their neighborhood schools that allow for exposure to values, cultural experiences, and activities enriching the overall education of their children.”

Noting the program’s popularity since it began — with 10,701 scholarships awarded to families from the 24,351 applications received — she added, “The reauthorization of the D.C. Opportunity Scholarship Program empowers parents to exercise their right to choose the best school for their child no matter their income and allows children to have a brighter future.”

Yisehak Abraham, who received the D.C. Opportunity Scholarship for his last four years of elementary school and all four years of high school, also testified.

“So, who has this program served?” he asked. “It served me and thousands like me. Students and families who were looking for a choice that was a better or the best fit for their educational future. A choice that would not be available to them were it not for the existence of the OSP.”

A 2012 graduate of Archbishop Carroll High School in Washington, he went on to Columbia University, where he majored in economics, graduating in 2016.

“Currently I am a research associate at the American Enterprise Institute where I focus primarily on financial markets,” he said. “In the future, I hope to continue to utilize economics to analyze policies to benefit the public.”

Reflecting on the scholarship program’s importance, he added, “Who are we, but the products of the choices we made from the options we were given?”

NEXT: Ohio quintuplets continue school tradition in a way not seen before