Ohio quintuplets continue school tradition in a way not seen before 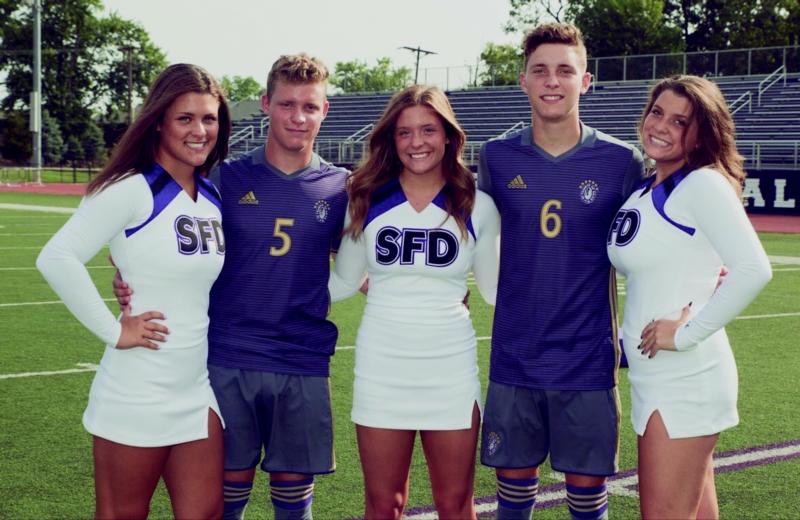 COLUMBUS, Ohio (CNS) — When it comes to upholding tradition and pride in a particular school, the Whalen family of suburban New Albany takes a back seat to no one.

The Whalens stand alongside families in which it’s not unusual for three and even four generations of students to have attended the same Catholic high school in the Diocese of Columbus.

But come June 1, the family will rise to the top of the class when the 33rd and 34th family members graduate from St. Francis DeSales High School — and the 35th, 36th and 37th, too.

Their graduation will occur a little more than a month after their 19th birthday — April 22 — which also will be the 24th wedding anniversary of their parents and the 48th birthday of their father, Mike Whalen.

The quints have a younger sister, Lindsey, who turned 10 Feb. 6.

Gina said she always has thought of the five as individuals rather than a unit, never doing things such as dressing them alike — and it’s readily apparent. Without being told they are quintuplets, someone might never realize it because each one has distinctive features.

The five also have followed their own paths in school, sharing some interests but being involved separately in many others.

“We get comments from people all the time about it, but for us, being quints is nothing out of the ordinary because we see each other every day,” Ben said.

“When it’s all you’ve known, you can’t imagine anything else,” Mary Kate added.

“It’s interesting to see how other families work, how older and younger siblings get along,” she told The Catholic Times, Columbus’ diocesan newspaper. “We have some of that, too, with Lindsey. We make sure she has her own special times, and she does have five brothers and sisters to turn to and to watch out for her.”

“We’ve always been close. My siblings are my four best friends,” Ben said, prompting a group “awww” from his siblings. “We know each other the most.”

“But we all have our own individual friends and groups of friends, and they become friends with each other,” Emma said. “So we get a chance to know a lot more people because there’s so many of us.”

One place where all five have been regularly found together is at DeSales soccer matches, with the two brothers as players and the three sisters as cheerleaders. Both brothers also belong to the school’s fishing club. Alex is a hockey player and Spanish Club member, and Ben plays volleyball and belongs to the business, engineering and math clubs.

Emma, Grace and Mary Kate all belong to the Math Club, the Ronald McDonald House Charity Baking Club and Go Red for Women, which works to build awareness of heart disease and stroke and to encourage healthful lifestyle choices. The sisters also are involved in clubs individually.

The family attends the Church of the Resurrection in New Albany, where all three sisters have taught in the parish religious education program. All the siblings have taken part in retreat weekends and service projects.

“The importance of serving others has been a tradition in our family for generations.” Gina said. The quintuplets’ late great-grandfather, Lawrence “Wheaties” Whalen, provided an example of service by his longtime work with the Charity Newsies, an organization that provides clothing to schoolchildren from low-income families.

Gina recalled how many families at their previous parish, St. Pius X Church in Reynoldsburg, helped when the quintuplets were born.

“We couldn’t have survived those early days without them,” she said. “So we’ve always been aware of what a blessing it is to give back to people and we’ve encouraged our children to do the same.”

All of the quints anticipate attending college somewhere in Ohio in the fall. Ben wants to major in engineering or architecture, while Alex is interested in accounting or criminology. The girls are considering careers in education.

“One big reason I want to be a teacher is the example many of the teachers at DeSales have set,” Mary Kate said. “They’ve shown me how much fun teaching could be and made it my dream job. The ultimate would be to come back to DeSales and teach.”

DeSales has deep roots in the Whalen family. Mike, one of his sisters and their parents are DeSales graduates, as are Gina and all six of her siblings.

“Not only have they shared their talents with the soccer, hockey and cheer teams, each of them has also found their own unique niche,” Garrick told The Catholic Times. “It has been a blessing to have them in our school over the past four years, and their legacy will leave a lasting impression on our special community.”

Puet writes for The Catholic Times, newspaper of the Diocese of Columbus. 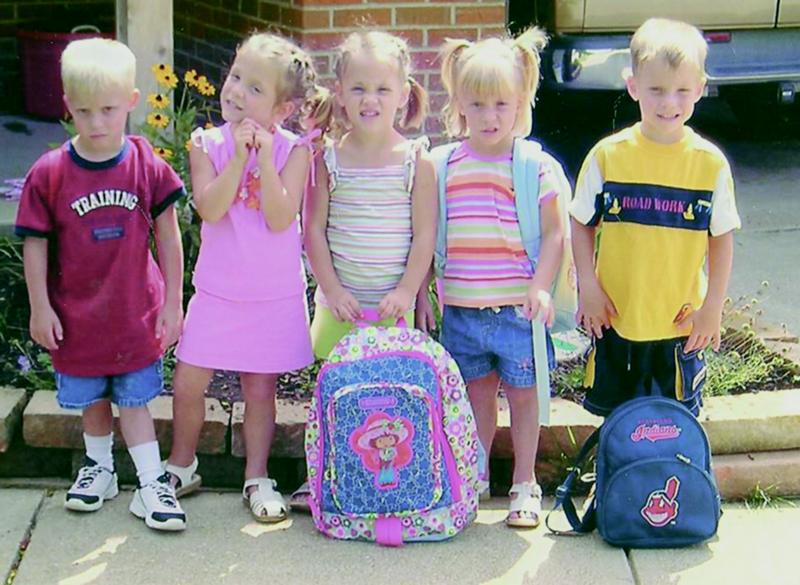 Quintuplets, from left, Alex, Emma, Grace, Mary Kate and Ben Whelan, pose for a photo on their first day of kindergarten in New Albany, Ohio, in this 2007 photo. The Whelan quintuplets are expected to graduate from St. Francis DeSales High School in the spring of 2019. (CNS photo/courtesy Whelan family)