Catholics must look to God for light in difficult times, says archbishop 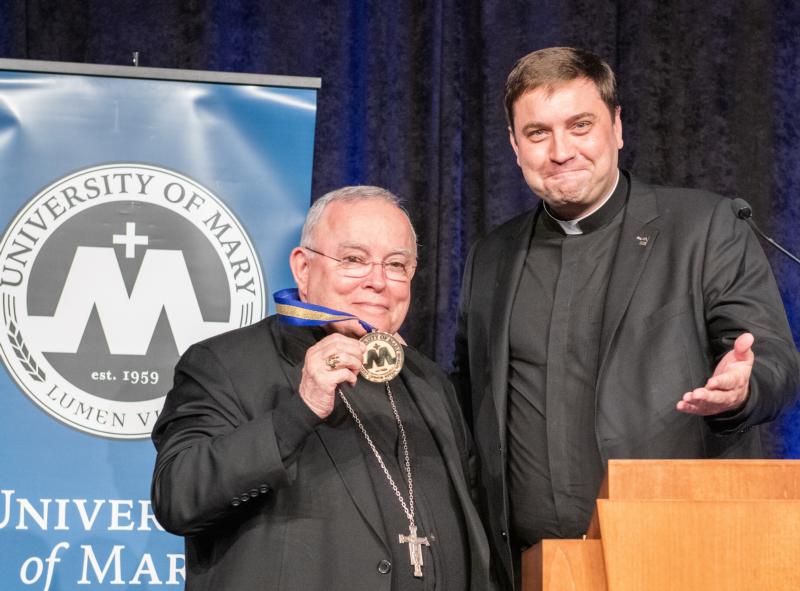 Msgr. James Shea, president of the University of Mary in Bismarck, N.D., right, gestures after presenting Philadelphia Archbishop Charles J. Chaput with the school’s Lumen Vitae medal (“The Light of Life”) March 20, 2019. The award is given to “those who are champions of Catholic education and who bring others closer to Christ and his church.” (CNS photo/Jerry Anderson, courtesy University of Mary)

BISMARCK, N.D. (CNS) — Defending our Catholic beliefs is important, but Catholic discipleship also is “about advancing the Gospel, not merely sustaining or protecting it,” Philadelphia’s archbishop said in an evening keynote address at the University of Mary in Bismarck March 20.

“No matter where or when or under what conditions we live, we have a mandate from Jesus Christ to preach the Gospel to all nations,” said Archbishop Charles J. Chaput. “That’s a duty for all of us — there are no exceptions; but much more importantly, it’s a joy and a privilege.”

(The full text of Archbishop Chaput’s address can be found here.)

The archbishop spoke during the university’s Vocations Jamboree. He also received the school’s Lumen Vitae medal (“The Light of Life”), given to “those who are champions of Catholic education and who bring others closer to Christ and his church.”

“We live in a difficult time,” he said, urging his listeners to look to God for light in a world of darkness. “There’s some good in the world, and it’s worth fighting for. That’s a pretty good description of the vocation God asks from each of us in a difficult time.”

Saying it is important to “understand the time and the lives that came before us,” Archbishop Chaput began his speech with a history lesson — the campaign against the Persian Empire in 334 B.C.

Parmenion “was told to hold the left side of the Greek line while Alexander and his horsemen rode far to the right,” he said. Parmenion’s “job was simply to stand his ground,” while Alexander the Great rode off “and the battle was joined.”

Parmenion “took the full weight of the Persian attack,” fighting for hours, not knowing the fate of Alexander, the archbishop said. “When Parmenion was completely surrounded … Alexander finally returned, routed the Persians and won the day.”

“A lot of Christian life, in difficult times like our own, involves just holding firm to the Gospel and the church and the basics of what we know as Catholics to be true, especially when those things are inconvenient; or seem pointless; or when they begin to cost us friends and social approval and opportunities,” he said.

At the same time, “sometimes holding fast is all we can do, or the best we can do. But in the long run, that’s never enough,” he explained. “God created us for much greater things. Faith is not a fortress or a hiding place. It’s meant to be shared.”

The more “we consciously seek to love the persons around us, and the more we discipline our hearts to pursue that goal, then the more our capacity for love grows,” he added.

“Our weapons are very different from the hatred and violence of a battlefield, but the combat is just as real. … Satan is real, evil is real, and there’s no neutral ground in the struggle for the soul of the world,” he said. “In the end, we’re either with God and for God, or we’re against him. We need to choose.”

“American life today is troubled by three great questions: What is love? What is truth? And who is Jesus Christ?” said Archbishop Chaput. “The secular world has answers to each of those great questions. And they’re false.”

For secular culture, “‘love’ boils down to emotional and sexual compatibility; a special kind of friendship between two sovereign and equal partners,” he explained, and “‘truth’ is a matter of individual experience and preference, differing from individual to individual and grounded in the self — not some overarching reality,” he said.

Society says Jesus Christ “was a good and holy man” but just “one in a long line of great ethical teachers,” he added.

These answers served up by secular society are not only false “but dangerous,” he said.

“They reduce our human spirit to our appetites,” Archbishop Chaput continued. “They lower the human imagination and the search for meaning to what we can consume. And because the human heart hungers for a meaning that secular culture can’t provide, we anesthetize that hunger with noise and drugs and sex and distractions. But the hunger always comes back.”

“The most deeply human questions … are things like, why am I here, what does my life mean, why do the people I love grow old and die, and will I ever see them again?” he said. “The secular world has no satisfying answer to any of these questions.”

But the Scriptures tell us many things, he said, including that “love is more than a feeling or instinct”; “real love is always expressed in action” — serving the poor, defending the unborn, feeding the hungry, visiting the sick and imprisoned, helping the elderly”; and “love is always ordered to truth, and truth is bigger than facts or data.”

“The truth about the world and our lives in it is a person: the person of Jesus Christ,” Archbishop Chaput said. “He’s the only reliable guide for our journey through the world.”

He also said that the challenges we face today “come not just from outside the church — they come from within her as well.”

“A lot of very good people are angry with their leaders in the church over the abuse scandal, and justly so. I don’t want to diminish that anger because we need it; it has healthy and righteous roots,” Archbishop Chaput said. “But what we do with our anger determines its effect — either as a medicine or a poison.”

“The church has seen corruption, incompetence and cowardice in her leaders, including her popes, many times in the past; many more times than most Catholics realize,” he said. “And yet here we are. Twenty centuries after the resurrection of Jesus, the church continues her mission.”

Archbishop Chaput told his audience if they live “lives that are well-formed” they will impact dozens of other lives and “begin the remaking of the world.”

He acknowledged that like young people everywhere, most of those in the audience for his talk will marry and have children. “By the way,” he added, “please have lots of them, because we need more good Catholics.

Most of them will make their mark on the world “with an everyday witness of Christian life, through work and family and friends,” he said.

But he also strongly urged them to “listen carefully,” because “God is whispering to dozens of the men and women here today, right now, about a priestly or religious vocation. Pay attention to the stirrings of your heart. We need more priests. We need more religious.”

St. Augustine lived at a time “when the whole world seemed to be falling apart, and the church herself was struggling with bitter theological divisions,” Archbishop Chaput noted. “But whenever his people would complain about the darkness of the times, he’d remind them that the times are made by the choices and actions of the people who inhabit them.

“In other words, we make the times. We’re the subjects of history, not merely its objects,” the archbishop added. “And unless we consciously work to make the times better with the light of Jesus Christ, then the times will make us worse with their darkness.”

“There’s some good in the world, and it’s worth fighting for,” he concluded. “That’s a pretty good description of the vocation God asks from each of us. And if Parmenion could trust Alexander, I think we can really and truly trust the God who made us.”