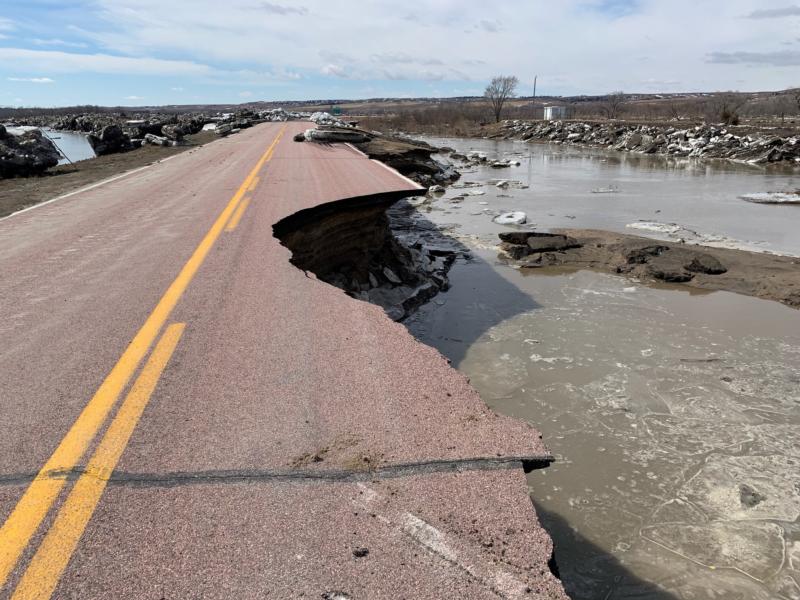 OMAHA, Neb. (CNS) — For Naoma Borgmann, the first sign of trouble was the look on her husband’s face.

Although 60-mile-per-hour winds were howling and 4- to 5-foot waves were crashing on the banks of the Missouri River near their home March 13, it was the sight of the water on the ground that shocked her husband the most.

“He said, ‘Naoma, I don’t know how to tell you this, but we are surrounded by water.'”

So, she and her husband, Hubert, witnessing the sudden rise of floodwaters, quickly took refuge in the upper level of their home in far northeastern Nebraska where they prayed and waited for help.

Strong faith and generous spirits are now helping the Borgmanns and other Catholics across the Omaha Archdiocese overcome and recover from the historic flooding in the state.

Conditions in mid-March were ideal for significant floods. With the ground still frozen and rivers choked with ice, heavy rains and melting snow swelled creeks and rivers, causing flooding along major rivers.

The flooding affected more than two-thirds of Nebraska’s counties, including many within the archdiocese, destroying or damaging homes, businesses, roads and bridges, crippling water and sewage systems and killing livestock.

The floods also killed at least three people, and stranded thousands of others.

“We believe in prayer and we have a deep faith,” Naoma Borgmann said. While they awaited rescue, they prayed The Lord’s Prayer and the rosary and gazed upon a crucifix she placed on the table.

“As we were leaving, I looked at that cross, and there was my strength,” she said.

Members of St. William Parish in Niobrara, the Borgmanns are thankful for the local farmer and his father who rescued them and the generosity of friends who helped them by providing a rent-free, temporary home in Creighton about 37 miles to the south, where their floral and home decor business is located.

This was not the first time the couple has faced tragedy. Their teenage daughter died in a car crash 25 years ago and their previous home was destroyed in a 2011 flood.

“You do question why this is happening again,” Naoma Borgmann said, “but you have to look at what it could have been. We’re here, we got out together and we’re still together. You look at what you have and not what you’ve lost.”

After the initial flooding began March 13, failure of the upstream dam the next day brought a destructive, 11-foot wave of water and huge slabs of ice into the small town of Niobrara, washing away or damaging many commercial buildings. Another bridge across the Niobrara River was also washed out, cutting off one route into town.

“Niobrara is like a war zone, said Father Kizito Okhuoya, pastor of St. William and St. Wenceslaus parishes in Verdigre, a town south of Niobrara that also sustained major damage.

But people are working hard to get things back to normal, he said.

“There’s been an outpouring of generosity and kindness from neighboring towns,” Father Okhuoya said, “and the community is coming together.”

He said the parish held an ecumenical prayer service March 15 “to bring people together and speak a message of hope and faith … knowing that even now, God walks with us through the waters, and reassuring people of God’s love and presence.”

Two days later the town held clean-up day with people from other towns coming over to help.

Both churches he serves are located on high ground, so they did not sustain damage and were able to hold Sunday Masses, he said. These parishes are raising money for relief efforts.

“This is the time we need to turn to God in prayer,” Father Okhuoya said, “and although people are hurting, they are hopeful and are focusing on the big picture.”

“They have faith that we’re going to bounce back as a town,” he said. “It could be worse, so people are thanking God but are grieving their losses and cleaning up. Their spirit is good overall, so I’m thankful to God for that.”

Although not as heavily damaged, other nearby towns faced their own challenges.

Father Lloyd Gnirk, pastor of St. John the Evangelist Parish in Valley, was stranded in his home and unable to hold weekend Masses March 16-17, but the church sustained no damage, he said.

As flood waters recede, Father Gnirk and his parishioners are joining other churches in the community to help with relief efforts, including providing meals for volunteers working on the cleanup.

“What the needs are and how we can help each other will be further revealed once we understand the extent of damage,” the priest told the Catholic Voice, archdiocesan newspaper of Omaha.

“But there’s a confidence that whatever happens, God provides,” he said. “It offers that firm foundation of faith.”

Francis and Carol Emanuel, whose farm near North Bend was unaffected, have been lending a hand to help people displaced by the flooding. In addition to their five children who still live with them, the Emanuels opened their home to relatives and another family for a total of 16 people and six dogs.

“A situation like this certainly brings people together,” Carol Emanuel said. “It’s one of those times when you’re forced to slow down and enjoy the people around you.”

She and her husband, members of St. Charles Borromeo Parish in North Bend, both grew up in very strong, Catholic families, she said.

“We grew up knowing that when somebody is in need you step up, so there was really no thought put into it at all. If somebody needs a place to stay, you say, ‘Come on out, we have room.'”

The archdiocese also is extending its hand to help parishioners and communities affected by flooding.

Omaha Archbishop George J. Lucas is asking parishes to conduct special collections for relief efforts during weekend Masses March 23 and 24. The collection will address immediate needs such as water, food, shelter and supplies, plus longer-term needs for tools and building materials.

NEXT: Catholics must look to God for light in difficult times, says archbishop