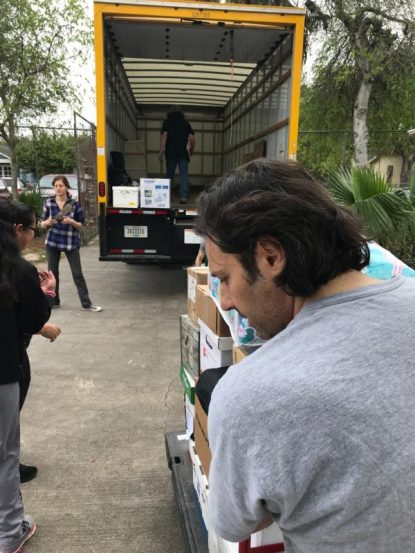 WASHINGTON (CNS) — On March 4, Cristobal Cavazos and his companions on the “DuPage Solidarity With the Asylum Seekers” project departed from the headquarters of the Diocese of Joliet, Illinois, and began a long trek to the U.S-Mexico border where they planned to deliver supplies to those who had made a much longer and more dangerous journey to get there.

With a truckload of clothes, shoes, toiletries and other goods in tow, they were seeking to seize “a chance to do a radical act of compassion” toward asylum-seekers from Honduras and other Central American countries who have arrived at the U.S. southern border, Cavazos told Catholic News Service.

“This is the front-page news” Cavazos declared in a phone interview. “Our brothers and sisters are showing up here.” He sees the plight of Central American immigrants as one that was similarly recounted in the Bible in the Book of Exodus.

“They are going to the promised land,” he said.

Groups involved in the solidarity project for asylum-seekers include the Diocese of Joliet’s peace and justice ministry as well as Lutheran, Mennonite, Episcopal, Unitarian and Methodist churches.

Cavazos downplayed the idea that caring for migrants ought to be a partisan issue amid contentious debates over border security.

“This isn’t about politics here,” he said. “Christ was the intersection of the left and the right. … There are no need for scapegoats.”

He instead stressed that the selfless work being done by the Catholic Church at the border stems purely from the faith and goodwill of those who have dedicated themselves to this mission, despite human nature often rigging us to pursue more self-interested motives.

“There is a part of human nature that says, ‘This is mine.’… It has always been the role of the Christian to say, ‘No,'” and rather increase one’s generosity, Cavazos stated.

Cavazos and those with him had just arrived in McAllen, Texas, in the Diocese of Brownsville, where they were about to deliver their load to a Catholic respite center. There, Catholic Charities of the Rio Grande Valley, headed by Sister Norma Pimentel, a member of the Missionaries of Jesus, operates a respite center for migrants. (The center recently had to find a new location as per an order by the McAllen City Commission.)

The center is “doing incredible work,” Cavazos said, “taking in almost 100 people a day and giving them food and water. … They are women and children. … They need the love.”

And that love is certainly needed as evidenced by the stories of asylum-seekers, many of whom are escaping extreme poverty, gang violence, unemployment or what some claim is persecution by corrupt governments.

“(Many of them) come from Honduras,” Cavazos reported, where people have few property rights and live under a “very corrupt government,” which came about as the result of a coup, he added. Cavazos additionally noted that children are often caught in the most wretched situations. “There are a lot of unaccompanied minors” and “a lot of abuse,” he said.

Migrants “are living with the same pure intention of living a good life” as others in the United States do, Cavazos remarked.

After McAllen, he and his companions planned to head to El Paso, Texas, where they hoped to help connect migrants with a network of resources, including helping them access pro bono immigration law firms.

“We are trying to get people connected to the resources of the Catholic Church,” Cavazos added.