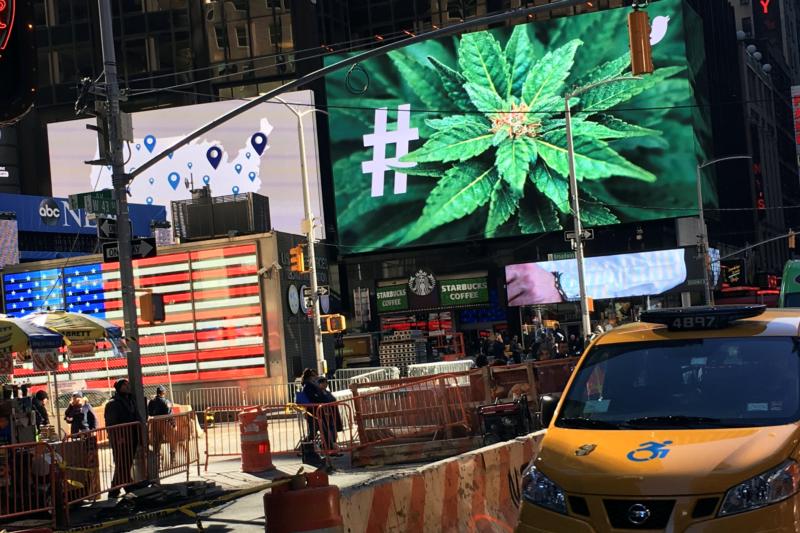 In this 2016 file photo, a billboard in New York City displays a marijuana hashtag. The New York State Catholic Conference called on the state’s legislators to reject any proposal that would legalize recreational marijuana use. (CNS photo/Shannon Stapleton, Reuters)

ALBANY, N.Y. (CNS) — The New York State Catholic Conference called on the state’s legislators to reject any proposal that would legalize recreational marijuana use.

The conference warned that the state was rushing to approve a measure that Gov. Andrew Cuomo has pushed to be included in legislation setting the state budget for fiscal year 2020, which starts April 1. Legalization would “open a Pandora’s box that will have multiple deleterious effects on individuals, families and all of society.”

The Catholic conference’s stance against the measure was in line with education, medical and law enforcement communities.

“The Catholic Church is not prohibitionist but at the same time we believe the government should not be encouraging destructive behavior, whether gambling or drug use, to raise revenue,” a conference statement said March 6.

“Vice is not an appropriate economic development engine for a state that prides itself as a national progressive leader. Our state motto is ‘Excelsior’ (‘ever upward’), but policies that exploit addiction instead lead us ever downward,” it added.

Cuomo revealed a plan for legalizing marijuana while unveiling a 2020 budget of $176 billion in January. The plan estimated legalization would bring in $300 million in revenue annually once it is fully implemented over several years. Sales could start as early as 2020.

The plan would limit legalization to people 21 years old and older.

Some lawmakers have said more time was needed to address concerns about the plan and they suggested consideration of the program’s approval could be delayed until closer to the end of the legislative session in June.

The conference, which represents the Catholic bishops throughout New York on public policy issues, said the while Cuomo and some legislators “see enhanced revenues for the state’s coffers,” church leaders were concerned about various social, health and safety consequences.

Among the concerns raised by the conference were “increased teenage and childhood usage (of marijuana), harmful effects on developing brains, addiction, natural progression to harder drug use, increased impairment-related transportation accidents and deaths, and other potential public health and safety issues.”

The 21-year-old age restriction also could easily be skirted, the conference said, pointing to widespread efforts by the alcohol and tobacco industries to market products to young people.

The conference also pointed to studies that show racial and ethnic disparities in enforcement of marijuana possession laws, saying: “We take this issue seriously.” The bishops called on state officials to take steps to “ensure that skin color or ZIP code do not result in different outcomes for the same offense.”

Such steps would include re-evaluating criminal penalties for low-level marijuana possession.

“At the same time, we must not simply throw up our hands and legalize a harmful substance in order to declare the problem of discrimination solved,” the bishops said.

If the program is approved, New York would become the 11th state to legalize recreational marijuana.

NEXT: Group’s immigrant solidarity project ‘not about politics,’ organizers say