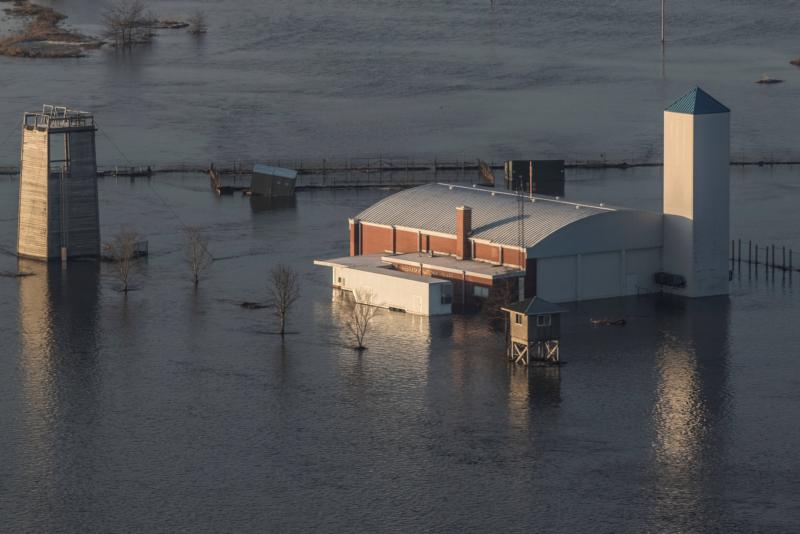 WASHINGTON (CNS) — The chairman of the U.S. bishops’ domestic policy committee late March 19 expressed grief over the lives and livelihoods lost and threatened by the historic flooding in the Midwest and offered prayers for recovery.

“We are deeply saddened by the loss of life and the damage caused by the flooding throughout the Midwest these past few days,” said Bishop Frank J. Dewane of Venice, Florida, who is chairman of the U.S. Conference of Catholic Bishops’ Committee on Domestic Justice and Human Development.

At least 9 million people in 14 states have been affected by rising water levels along rivers and creeks in the central United States, he noted in a statement.

According to The Weather Channel, rapid snowmelt and heavy rain sent rivers surging to record levels in parts of the Plains and Midwest. Over 40 locations set new record river levels, mainly in Nebraska and Iowa.

Those two states and Wisconsin are all under in a state of emergency. At least three people have been killed by swift currents and rising floodwaters, and hundreds of others are being forced to flee their homes as the floodwaters continued to destroy the area. The water was not expected to begin receding until the end of the week.

“It is our prayer that those affected by the floods will find the strength to rebuild,” he added. “We trust that the Lord will console them in their suffering. Let us answer the Lord’s call to love one another and generously support our neighbors in this time of need.”

Donations can be made to Catholic Charities USA.

The Archdiocese of Omaha, Nebraska, announced it will hold a special collection at weekend Masses March 23 and 24 to help offset the damage arising from severe flooding in northeast Nebraska.

Deacon Tim McNeil, spokesman for the archdiocese, said pastors were asked to conduct a needs assessment in their communities. Based on that evaluation, pastors can request funds from the archdiocese to aid in short- and long-term rebuilding and recovery efforts.

He said archdiocesan funds will not be restricted to parishes and their immediate needs. He said pastors can request funds to help with community-wide recovery programs.

The National Weather Service said the Missouri and Mississippi river basins have risen to historic levels, with the Missouri River “swelling out of its banks.” Much of the Offutt Air Force Base near Omaha is described as being underwater.

Nebraska Farm Bureau president Steve Nelson told reporters it was too early to provide a definitive estimate of the damage but that some early estimates put ranching losses in the state at $500 million and row crops — in Nebraska, that is largely corn, soy and, to a lesser degree, wheat — at another $400 million.

A CBS News story illustrated the kind of devastation taking place on Nebraska’s farmlands, reporting that Doug and Eric Alberts were trying to round up the surviving hogs on their nine-acre farm in Fremont and “there aren’t many left.”

The Washington Post daily newspaper reported that Anthony Ruzicka, a fifth-generation Nebraska rancher, said it may be “a sign from God” that he get out of farming. He managed to get to higher ground before a wall of water from the failed Spencer Dam “swallowed up many calves and all his bulls, along with his farmhouse, outbuildings and feed bins,” the paper said.

NEXT: Theologian supports declaring St. Romero ‘doctor of the church’