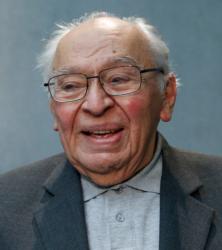 WASHINGTON (CNS) — One of the founders of liberation theology in Latin America said he supports an effort to declare St. Oscar Romero a doctor of the Catholic Church.

During a March 18 livestream of an event celebrating the Salvadoran saint canonized in October, Dominican Father Gustavo Gutierrez, considered by many as the father of liberation theology, said he thought the idea of naming St. Romero a doctor of the church was an “excellent” proposition.

While some value a person’s writings or academic record, when it comes to declaring a saint a doctor of the church, “love toward another person is worth more than all of the theologies,” said Father Gutierrez, recalling something he’d read from another theologian. He was speaking via internet to those gathered for “Romero Days,” an event sponsored by the University of Notre Dame.

Saints who are declared doctors of the church “are probably best thought of as doctors in the Ph.D. sense of the word,” said Father Larry Rice, explaining the term in 2015 on the website of the U.S. Conference of Catholic Bishops.

“Through their research, study and writing, they have advanced the church’s knowledge of our faith. To be declared a doctor of the church does not imply that all their writings are free from error but rather that the whole body of their work, taken together serves to advance the cause of Christ and his church,” he wrote.

St. Romero was a prolific writer and much can be gleaned from his works, explained Father Gutierrez, who said he encountered the Salvadoran saint in the early 1970s. But contrary to the belief that many promulgated that St. Romero himself was a follower of liberation theology and its embrace of the “preferential option for the poor,” there isn’t much to support that, said Father Gutierrez.

“We can’t say that,” he said, because St. Romero was traveling a different journey, and he had already encountered a world of poverty in Eastern El Salvador in 1970 when he served there. Father Gutierrez’s book that gave a spotlight to liberation theology wasn’t published until 1971. By then, St. Romero was making “advances” of his own because of the poverty he had seen among his people, Father Gutierrez said.

Just before St. Romero’s May 2015 beatification in El Salvador, Chilean Father Pablo Richard Guzman, a well-known liberation theologian in Latin America, told Catholic News Service that while the Salvadoran archbishop was not a follower of liberation theology, “he influenced us.”

While he may have heard of the liberation theology, St. Romero was undergoing a “process,” not the much-talked about conversion others tout, Father Gutierrez believes.

“Much has been said about Romero’s conversion and people have the right to say what they think,” Father Gutierrez said. “I just want to say that I don’t agree.”

He did seem to show a bit of “distrust” of certain movements within the church in Latin America, Father Gutierrez said, but he was always willing to keep an open mind.

He said later in life he read the saint’s notes about meeting with him. St. Romero wrote: “Father Gustavo was different than what people had told me.”

Witnessing his canonization decades later was not a surprise, Father Gutierrez said.

“It was a great pleasure but, like many, I was sure it was coming,” he said.