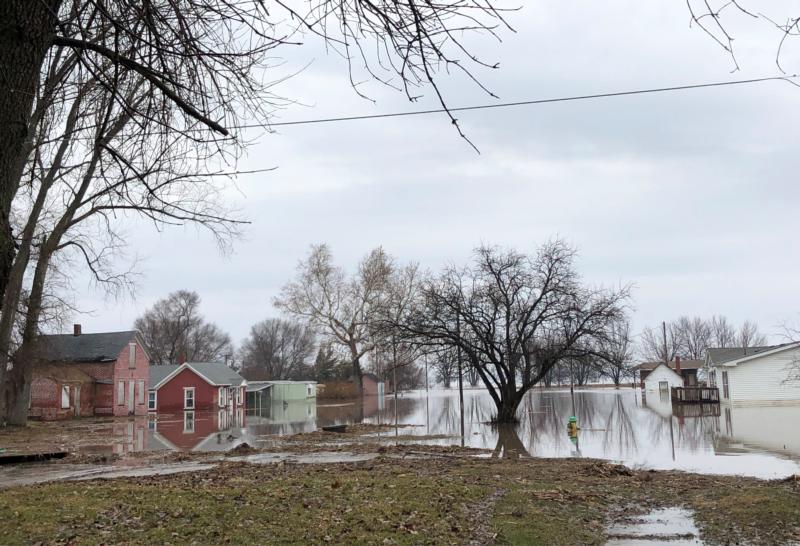 WASHINGTON (CNS) — After floodwaters ravaged much of Nebraska, ironically one thing some people needed most was clean water.

The town of Peru, home to 1,000 residents alongside the Missouri River, had a drinking water shortage for several days after the town’s water treatment plant was flooded.

Catholic Social Services of Southern Nebraska, based in Lincoln, an hour north, stepped in to help with a bottled-water drive for displaced students at the town’s Peru State College which closed for several days because of the flooding.

Town officials asked people to conserve water as best they could and to drink bottled water available at the college campus and City Hall before the National Guard and a nearby town replenished the town’s quickly-drained water tower.

The town remained under a boil water notice March 21.

For Father Justin Fulton, assistant director of Catholic Social Services, the bottled-water drive alone showed one way so many in the state are linked. The college where they delivered water is where he obtained his master’s degree and the nearby town of Auburn, that helped replenish Peru’s water supply, is where he grew up. Most of that town had been under water from the flooding that began March 14 after a combination of rain, melting snow and ice jams caused rivers to overflow.

The flooding in Nebraska caused widespread damage to stored grain and fields where planting was about to begin and left livestock — cattle, hogs and chicken — stranded or drowned. It also damaged hundreds of miles of state roads — many that have remained closed since the flooding began — and left thousands of homes and hundreds of businesses waterlogged.

It will likely take months for state officials to declare the full cost of damage from the flooding but preliminary estimates of damage to homes and businesses is more than $1.3 billion, state officials said in a March 19 news conference, announcing that three-fourths of the state’s counties have declared an emergency.

Father Fulton told Catholic News Service March 20 that “everyone knows everyone” in Nebraska, especially since so many people grew up there and farms have been in families for generations.

“We’re all connected,” he said, and with outpouring of support for those harmed by the flood, he said, Nebraskans are reminded: “We are connected as a human family.”

But even in midst of this disaster that hit farming communities so hard, he maintains that people are not giving up, especially on their faith. “With anything, you’ve got to be able to see God working,” he said, adding: “We’re going to get through this.”

The priest, who is in residence at St. Teresa’s in Lincoln and teaches Catholic morality and social teaching to juniors at Lincoln’s St. Pius X High School, said the flooding has provided a lot of fodder for conversation about God.

“Nebraskans are simple people. We understand challenges because our lives are tied to the elements,” he said. The priest added that there have been many good years, but now with this dramatic turn, he doesn’t sense that people think “God has abandoned us.”

“We aren’t losing faith; we’re making it stronger,” he added.

And as for the outreach of groups like Catholic Social Services, he said: “We’re not geared to respond to something this big” and for now are “treading water” before long-term help begins in the area.

Donations can be sent directly to Catholic Social Services of Southern Nebraska here or to Catholic Charities USA for flood relief to Midwest region here.

NEXT: Catholic social teaching guides advocates in push for a ‘moral’ budget