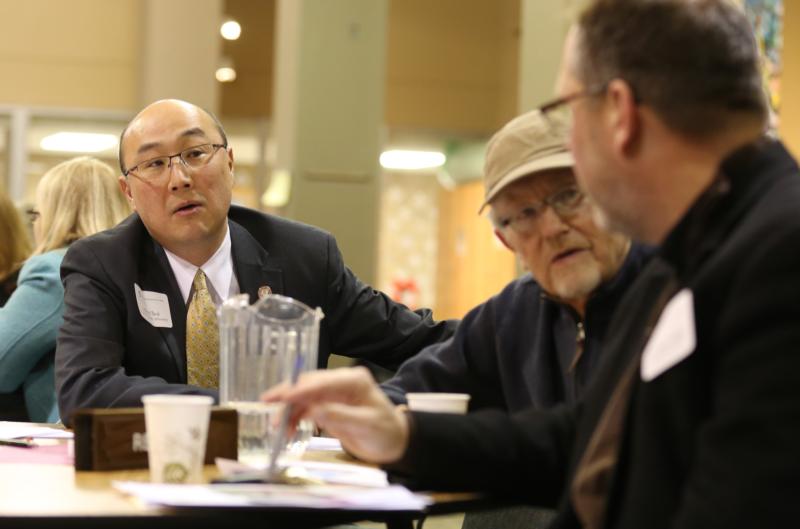 But on a recent evening, Choi joined about 100 people at St. Odilia in Shoreview for a session on restorative justice organized by several parishes and supported by the archdiocese. It was designed to help people share the pain caused by the clergy sexual abuse crisis and to promote healing and restoration of trust in the church.

“It’s really happening in this room, tonight,” Choi told those gathered of the archdiocese’s progress. “Where there’s reconciliation, where people are acknowledging harm that was caused to all sorts of families.”

Settling into small groups called healing circles, people took turns holding a stone marking their time to speak. They talked about how the abuse crisis has affected them, their faith and feelings about the church. They also offered suggestions for what might help them deal with the crisis. Several shared with the larger group ways the church might move forward, based on their small-group discussions.

“At our table, we found it empowering to be able to sit and talk about these issues without being judged,” Gloria de Meireles, a member of St. Odilia, told The Catholic Spirit, the archdiocesan newspaper.

“We liked the dialogue,” said parishioner Bob Gronda, at another table. “We’re hoping this will continue in our community. Not just with this, but for other things as well. Because we see (the) value.”

Janine Geske, a restorative justice expert who is a former Wisconsin Supreme Court justice and retired law professor at Marquette University in Milwaukee, helped introduce the restorative justice concept to the archdiocese last year, and she was among leaders of the Feb. 21 session. She said restorative justice is intended to promote positive ways forward after immense hurt. Healing circles can help victims and perpetrators come to terms with what has happened, she said.

“There is no returning to what came before,” Geske said. “If you have been terribly betrayed, there is a life before and a life after. How are you going to be able to live as a new person in this life? That’s what restorative justice looks like.”

Father Dan Griffith, pastor of Our Lady of Lourdes in Minneapolis, an attorney and former safe environment delegate at the archdiocese, laid out a biblical and theological understanding of restorative justice. He also credited Choi with being well respected and a “big-picture lawyer who thinks outside the box.”

Before the mini-sessions on restorative justice, Choi told the group about his own journey as chief prosecutor in Ramsey County dealing with allegations the archdiocese failed to protect children from clergy sexual abuse.

“That was a really heavy thing for me to wrestle with,” he said. “Because I was raised Catholic, and we all have a culture that we’ve been raised around, right? To find out that there were things that were not being done appropriately was very difficult for me, and it challenged my faith in many ways.”

At the same time, he had a responsibility to investigate, Choi said. Some people pressed his office for quicker action, but Choi said he took a thoughtful, deliberative approach and found that in the Wehmeyer case, the archdiocese had not protected children from abuse.

Criminal and civil charges were brought against the archdiocese in June 2015, and then-leaders Archbishop John C. Nienstedt and Auxiliary Bishop Lee A. Piche resigned shortly afterward. Archbishop Bernard A. Hebda was named a temporary leader of the archdiocese, a role Pope Francis later made permanent.

Civil charges were settled in December 2015 in a 24-page agreement that outlined child protection measures to be taken by the archdiocese and the county attorney’s office’s oversight through February 2020.

The archdiocese had previously filed for Chapter 11 bankruptcy reorganization in January 2015 amid a growing number of claims against it. A settlement was confirmed in U.S. bankruptcy court last year that includes $210 million for 442 victims/survivors.

At the gathering in Shoreview, Choi said that in his investigation, there was not enough evidence to criminally charge any one individual in the archdiocese. And the Ramsey County settlement helps ensure the safety of children while providing an opportunity for the church to rebuild trust among the Catholic faithful and the broader community, he said.

“I’ve been very impressed by the work of Archbishop Hebda, and his care and his attention and willingness to get this right,” Choi said.

The archdiocese’s effort has been noticed in dioceses across Minnesota and around the country, Choi said.

Archdiocesan compliance to the county settlement agreement is reviewed every six months, and that has gone well, Choi said. The final six-month review is expected to take place in early 2020.

“This last year will be a really critical time,” Choi said. “But the collaboration with the archdiocese from my understanding has been very positive. They really want to get this right. And of course, all of us want to make sure this never happens again.”