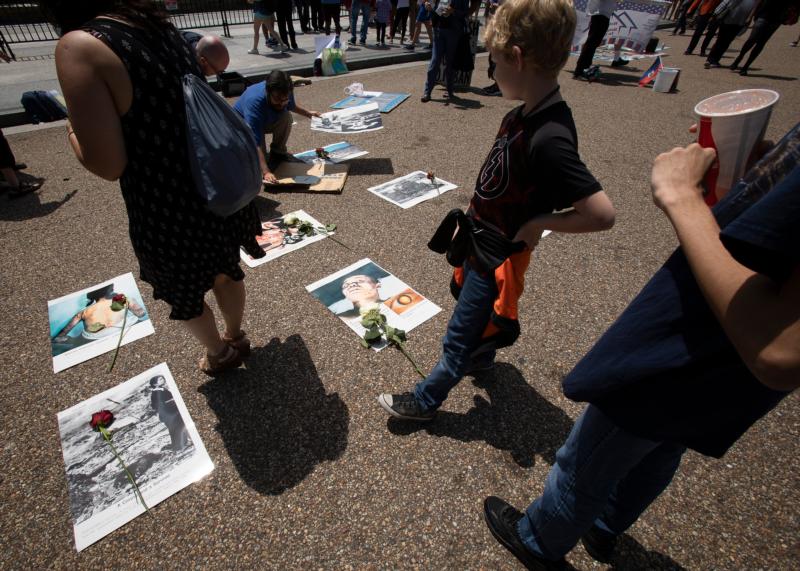 People in Washington look at photos from World War II near the White House Aug. 9. The photos were part of a Catholic prayer service of repentance for the use of nuclear bombs on Japan in 1945. (CNS photo/Tyler Orsburn)

WASHINGTON (CNS) — Kelsey Davenport admits that the Cold War and “the impending doom of nuclear annihilation” is not something she recalls while growing up in her native Marquette, Michigan, even though her family lived not far from a now-closed airbase that was a key part of the U.S. nuclear triad.

It wasn’t until Davenport enrolled in the master’s program in peace studies at the University of Notre Dame in 2009 that she understood the serious threat from nuclear weapons had not subsided even if Russia and the United States were partners on key nuclear arms reduction treaties.

Now on the staff of the Washington-based Arms Control Association, Davenport, 34, is ascending as a leading voice on nuclear nonproliferation in a time when nuclear weapons are making headlines again.

“Given the challenges facing the field right now,” Davenport told Catholic News Service, “I think it’s more critical than ever for the public, for those of us working in the field, to stay engaged on the issues and remain motivated and committed to freeing the world of nuclear weapons.”

Davenport, who is Catholic, is one of an emerging generation of experts who are taking the reins from the old guard of nuclear disarmament advocates.

The need for young leaders, advocates, moral theologians, scholars and policy specialists such as Davenport to raise their voice on disarmament far exceeds the number of people interested in peace studies, said Gerard F. Powers, director of Catholic peacebuilding studies at the Kroc Institute for International Peace Studies at the University of Notre Dame.

Still, there have been breakthroughs in outreach to young people, he said, with some embarking on a career that can be difficult to enter. 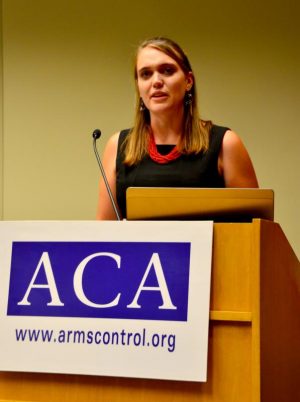 Stephen Colecchi, who retired last April as director of the U.S. Conference of Catholic Bishops’ Office of International Justice and Peace and now consults on nuclear disarmament issues, acknowledged that it is difficult to attract young people to the field.

“It seems like an issue of the past. It seems like something that the world has moved beyond,” he said, recalling his participation in bomb raid drills in grade school in the 1950s and 1960s. “We have a lived experience of that fear that the current generation doesn’t have.”

Powers said the need for Catholics in particular to engage in the nuclear disarmament debate is as crucial as it has been more than three decades because of the recent announcement by both Russia and U.S. to withdraw from the Intermediate-Range Nuclear Forces treaty. The actions threaten a new arms race that would endanger Europe in particular.

Only the 10-year-old New START pact between the world’s foremost nuclear powers remains. It is set to end in 2021 unless the two countries agree to a five-year extension. The treaty caps the number of deployed strategic nuclear warheads and bombs by each country at 1,550.

Powers, colleagues at Notre Dame and partners at Georgetown University, Boston College and the USCCB are driving an effort to attract new — and younger — voices to become engaged in ethical and policy arguments for reducing and eliminating nuclear weapons.

Starting in 2014 with a program hosted by two former secretaries of state — George Shultz and William Perry — that brought bishops and scholars together at Stanford University, the effort has involved clergy, Vatican officials, ethicists, theologians and students into the fold to explore questions surrounding church teaching on the possession and use of nuclear weapons.

The latest effort involves a spring seminar May 19-24 at Georgetown University that they hope will bring together college students in a wide-ranging discussion with academic and policy leaders on the state of nuclear disarmament.

Powers said he and others hope their effort also will find clergy more confidently and consistently addressing the pastoral and moral issues surrounding the most powerful weapons ever produced.

But it is young people who are the lynchpin, Powers said.

Jesuit Father Drew Christiansen, distinguished professor of ethics and global development at Georgetown University, is a partner in the effort. He said he believes it’s time for the Catholic voice to rise to the pinnacle it held in the 1980s and new voices can lead the way. In the face of a nuclear arms race, the U.S. bishops in 1983 released a pastoral letter, “The Challenge of Peace: God’s Promise and Our Response,” that offered moral perspectives on war and peace, nuclear deterrence and the possession of nuclear weapons.

While the letter set off years-long debates on the issue, the profile of nuclear weapons gradually subsided as the Cold War ended, leading many people to believe that such armaments no longer posed a threat. One of those was Coadjutor Bishop Oscar Cantu of San Jose, California, and former chairman of the U.S. bishops’ Committee on International Justice and Peace.

The bishop’s level of awareness changed years after the Cold War’s demise when he learned that nuclear weapons were at the ready for use, being stored and being transported on the country’s highway, at times in unsafe conditions.

Bishop Cantu, 52, said he believes that people of any age, but especially millennials would be motivated to seek disarmament if they better understood the risks posed by such weapons.

The same concern is on the mind of Father Christiansen, who said the “delusion of deterrence” — that having nuclear weapons will deter other powers from striking — continues to pose a danger to the world.

With more nuclear weapons-possessing states today than in the 1980s, “the times demand an update in our thinking,” he said, adding that he hopes a new generation will emerge to carry on the work he and others have shepherded for more than three decades.

The Washington-based Nuclear Threat Initiative has backed the Catholic scholars’ effort to identify new voices in the nuclear disarmament discipline. Carmen MacDougall, the initiative’s vice president for communications, said that while her organization works primarily on policy and technical issues, it is interested in bolstering a new generation of voices on nuclear disarmament.

The Nuclear Threat Initiative has financially supported the Kroc Institute’s outreach and is currently funding a part-time staff position.

MacDougall, who is Catholic, pointed to student involvement in a November 2017 Vatican conference on disarmament in which Pope Francis argued that any country that insists on maintaining a nuclear arsenal “creates nothing but a false sense of security,” saying that total disarmament is the only acceptable solution.

“I think they brought a fresh perspective,” MacDougall said of the 20 students at the gathering.

Throughout Rickard’s studies, she has been rocked by how the nuclear powers again have come to discuss the possibility of using weapons of mass destruction to the detriment of the planet. She said her Catholic faith guides her to seek an end to the threat of a nuclear weapons exchange.

“Personally, it just blows my mind that we have weapons capable of such mass destruction,” said Rickard, 22. “I find it contradictory to the most fundamental level of our existence that these weapons are touted by the superpowers today so cavalierly at times.”

She cited two papal encyclicals as cause for hope if people read and study them: “Rerum Novarum,” the 1891 encyclical on capital and labor by Pope Leo XIII that ushered in the age of Catholic social teaching, and St. John XXIII’s “Pacem in Terris” (“Peace on Earth”) in 1963, which pleaded for banning nuclear weapons.

“I take the church’s call to protect human life to mean to abolish these weapons that are a contradiction in life,” Rickard said. “I don’t know how we can dance around the topic much longer if we have such malicious means at our fingertips.”

NEXT: Hondurans, Nepalese will remain in U.S. under Temporary Protected Status