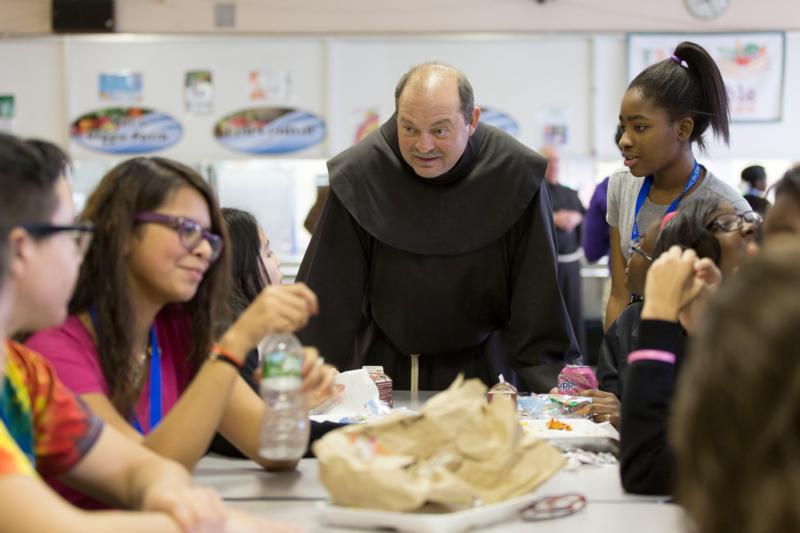 In this 2017 file photo, Franciscan Father Greg Gebbia, principal of Christ the King Preparatory School in Newark, N.J., talks with students during lunch. A March 4 statement by New Jersey’s Catholic bishops details ongoing efforts to ensure safe environments for children and youth, deal with clergy charged with abuse and assist victims in their process of healing. (CNS photo/Octavio Duran)

TRENTON, N.J. (CNS) — A statement signed by New Jersey bishops details ongoing efforts to ensure safe environments for children and youth, deal with clergy charged with abuse and assist victims in their process of healing.

The March 4 statement was provided to the 120 state legislators and media outlets by the New Jersey Catholic Conference, the public policy arm of the state’s bishops, in Trenton.

The statement begins by acknowledging the recent Vatican summit on clergy abuse “to address a morally reprehensible, shameful and horrific crime — the sexual abuse of children.”

The bishops point out that for two decades the Catholic Church in New Jersey has acted to address clergy sexual abuse and currently has a policy of zero tolerance, which means any priest who has abused “even one child is to be permanently barred from engaging in any act of public ministry.”

Each New Jersey diocese has policies in place to respond to and prevent the sexual abuse of minors, and these policies are regularly verified by an external audit. In the past 10 years, the state’s dioceses have trained more than 3.1 million adults, children, employees, clergy and volunteers to detect and prevent abuse and during the past 15 years, dioceses have completed 385,000 criminal background checks of all clergy, staff and volunteers who have regular contact with minors.

The statement points out that the Newark Archdiocese and the Trenton, Camden, Paterson and Metuchen dioceses are all “committed to assisting victims of abuse whenever and however we can” particularly through victim assistance coordinators.

In 2002, the New Jersey dioceses entered into a memorandum of understanding or a nonbinding agreement with the attorney general and all 21 county prosecutors to facilitate the intervention of law enforcement whenever there is any allegation that a minor has been sexually abused.

Since that time, the statement said, the dioceses have reported all allegations of abuse to public authorities, whether the person bringing the complaint is now an adult, no matter how long ago the abuse is alleged to have occurred, and whether or not the accused is living or deceased.

The New Jersey Division of Criminal Justice described this agreement in a 2002 news release as “the most comprehensive and precise agreement of its kind in the nation for not only aiming to protect victims of sexual offenses but to ensure prosecutors are “provided with all relevant information regarding allegations of sexual assault — whether past, present or future.”

Last November, the state’s dioceses announced a Victims Compensation Program to provide victims with an alternative to litigation providing them with a non-adversarial process to resolve their claims with a significantly lower level of proof and corroboration than required in a court of law.

“Now is not a time for just more analysis and study,” the bishops’ statement said. “This is a time for action to prevent any future abuse anywhere it might occur. ”

Editor’s Note: The full text of the New Jersey bishops’ statement can be found here.

NEXT: Old guard looks to new generation of voices on nuclear disarmament