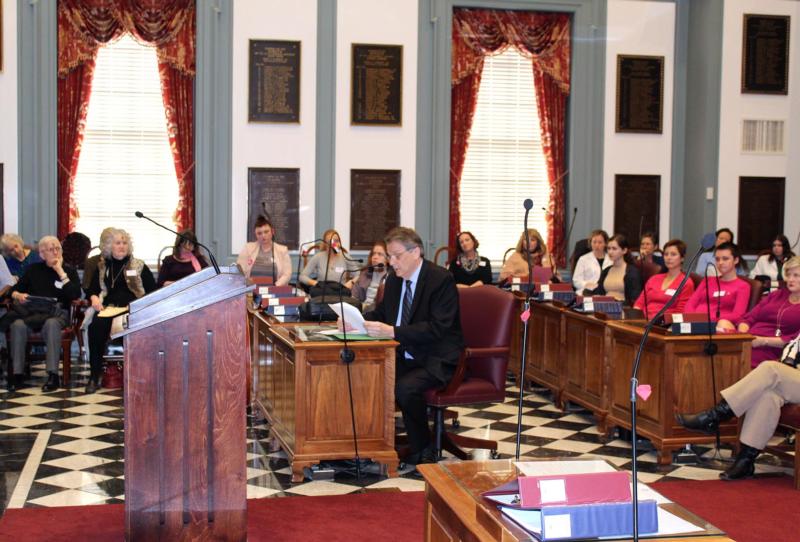 Delaware Republican Sen. Bryant Richardson discusses two bills — The Pain-Capable Unborn Child Protection Act and the Woman’s Ultrasound Right to Know Act — in a hearing room March 6, 2019. He introduced the bills, which both restrict abortion, in the state Senate in January. (CNS photo/Joe Owens, The Dialog)

DOVER, Del. (CNS) — An overflow crowd crammed into a hearing room in Dover before a Delaware Senate committee chairwoman decided to move the group of several hundred into the main Senate chamber to hear testimony on two bills seeking to limit abortion in the state.

The Senate’s Sunset Committee heard testimony from nearly two dozen abortion opponents and advocates for legal abortion after the relocated hearing got under way March 6. They were discussing two bills — The Pain-Capable Unborn Child Protection Act and the Woman’s Ultrasound Right to Know Act — that were introduced in January by Republican Sen. Bryant Richardson.

A vote on whether to move the bills to the full Senate is expected within the week, said Democratic Sen. Elizabeth Lockman, the committee chairwoman.

The first proposed law would limit abortion in the state at 20 weeks because at that point, according to testimony, a fetus can feel pain, including that caused by the two most common forms of abortion. The second would compel a doctor to offer a patient the opportunity to see ultrasound images and hear fetal heart tones before terminating a pregnancy.

“The process they’re being subjected to — such as dismemberment — would inflict pain on any person,” said Dr. Sheila Page, a Texas physician certified in neuromusculoskeletal medicine. “The idea that the function of the nervous system would develop later is false. We know that a human being can feel pain at that point.”

“The evidence is there — we either recognize it or not,” Page said. “Science cannot tell us whether it is right or wrong to kill someone.”

Wilmington Bishop W. Francis Malooly in February urged nearly 200,000 Delaware Catholics in the Diocese of Wilmington to show support for the bills introduced in both chambers of the state Legislature.

“We have to do whatever we can to encourage a culture of life in Delaware and these bills would do that by limiting abortion and making parents more aware of the life that is present in the mother’s womb,” the bishop said. “All incremental steps to ending abortion are worthwhile.”

Richardson, a Seaford resident in his second term, urged the five-member committee to move the pair of bills to the full chamber.

“Future generations will look back on this era and say ‘How could we allow abortion?'” he said. “I think this is a horror that needs to end. A law that deprives someone of life is an unjust law.”

Advocates of a right to abortion spoke out against the proposed laws.

“We have the right to privacy,” said Linda Barnett, of the American Association of University Women. “We see it as an emergency medical procedure. There is no firm conclusion as to whether a fetus experiences pain.”

“Some babies are surviving when they’re born at 21-22 weeks,” she said.

Resident William Corley made a personal appeal to Senate members.

“Please ask God to guide your decision and support these bills,” he said.

Melanie Ross Levin, director of the state Office of Women’s Advancement and Advocacy, said she was also representing Gov. John Carney in asking the panel to reject the bills. She said they would “pose an unconstitutional ban on women’s rights.”

Richardson said he hopes for a full debate in the Senate.

“I will not stop working for those who don’t have a voice,” he said. “I won’t stop doing it until the day I die.”

PREVIOUS: Lenten staple prompts a grammar debate: Are they fish ‘fries’ or ‘frys’?