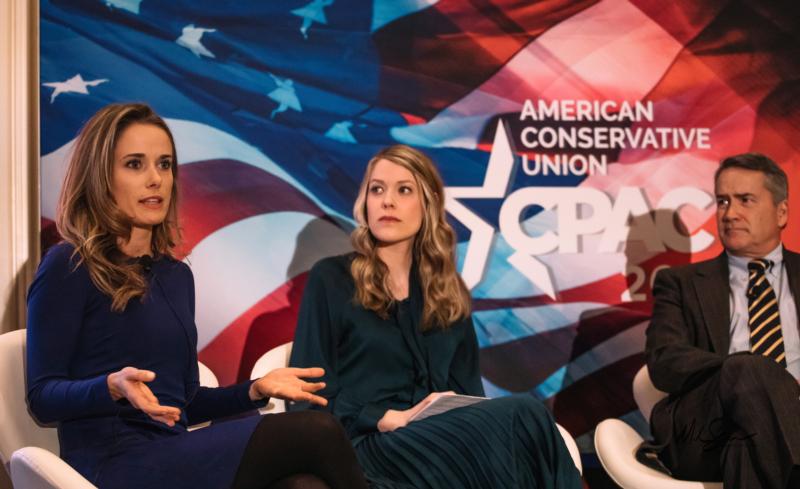 NATIONAL HARBOR, Md. (CNS) — Alison Centofante, representing the pro-life advocacy group Live Action, declared to an audience gathered in suburban Washington: “The biggest scam in our society today is that we are allowing a conversation about abortion to happen without making people define what an abortion is.”

And so began a Feb. 28 conversation at the annual Conservative Political Action Conference with Centofante, Matt Smith of Catholic Advocate, U.S. Rep. Jody Hice, R-Georgia, and Mary Vought, an author and political consultant.

The abortion provider uses word games, Centofante said. “(They) want a woman’s ‘right to choose’ what? What are you choosing to do?”

Politicians who support a right to abortion and the media continue to lap up Planned Parenthood’s rhetoric, according to Centofante. “We have members of Congress that are voting (against) … (anti-) infanticide bills. … We have a media that is allowed to talk about abortion in euphemisms … ‘byproduct of conception’ … ‘termination of pregnancy.'”

She claimed such actions derail moral and factual conversation on the issue, such as pointing out that a heartbeat can be detected in a fetus as early as 22 days into a pregnancy. Her organization spreads awareness by taking to the streets and even college campuses to screen its videos of the technical aspects of abortion.

Instead of encountering resistance, she said, “people are so moved. They have no idea that abortion involves depriving a fetus of nutrition by giving it poison.”

Hice, for his part, described the pressure he faces as a legislator to push back against abortion despite the formidable allies Planned Parenthood has in the House of Representatives.

He referred to Live Action’s videos, saying, “We need (those) same videos in Congress.”

However, despite Planned Parenthood’s rhetorical offensive, he related that even his constituents who don’t agree with him fully on the issue are now beginning to see the light amid statements made recently by Virginia Gov. Ralph Northam supporting late-term abortion.

He revealed that “even people in my district that are pro-choice are looking at this new direction with disgust.”

In a Jan. 30 radio interview, Northam was asked about a legislator’s measure, now tabled, that would have allowed abortion even at delivery if a woman requested it. “So, if a mother is in labor, the infant would be delivered,” the governor explained. “The infant would be kept comfortable, the infant would be resuscitated if the mother and the family desired, and then a discussion would ensue between the physicians and mother.”

Because people at the level of state government are often the motivators of change at the federal level, Hice told those in attendance Feb. 28 to focus hard on the issue at home, especially with regard to pieces of legislation such as heartbeat bills that have proven successful in several states. “This is where all of us come into play,” he said. “When states start taking strong pro-life measures … in the long run it helps us in Washington.”

Though Vought’s profession is not directly related to the issue, she had a story about her pregnancy that solidified her opposition to abortion despite what those around her were saying at the time.

Five years ago, her daughter was born with cystic fibrosis, “and at that time, about 70 percent of women that were carrying a child who had cystic fibrosis chose to abort it,” she said.

The professionals around her condoned a decision to abort, she recalled. “I honestly lost count of the number of times … doctors, nurses … aggressively informed me of my options and not one of them told me to visit a CF (cystic fibrosis) clinic.”

While she had always believed in the pro-life cause, she is constantly reminded about what a “woman on the fence” would have done in her situation.

But she persisted in her beliefs. “Now my daughter is 5 years old,” she said, and “living a very good life.”

PREVIOUS: Ohio quintuplets continue school tradition in a way not seen before

NEXT: Diocese of Columbus releases list of clergy with credible abuse claims