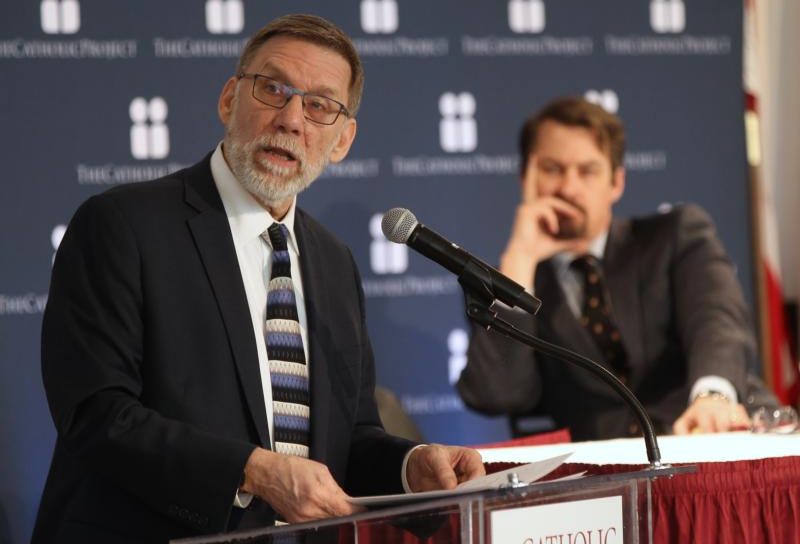 Richard Gaillardetz, the Joseph professor of Catholic systematic theology at Boston College and current chair of the college’s theology department, speaks March 26, 2019, during a panel discussion at a conference titled “Healing the Breach of Trust” at The Catholic University of America in Washington. At right is Chad Pecknold, associate professor of systematic theology at The Catholic University of America. (CNS photo/Bob Roller)

WASHINGTON (CNS) — Two systematic theologians examined how power and clericalism among Catholic clergy played a role in creating the sexual abuse crisis that has rocked the church anew since June during a daylong Catholic University of America conference.

While offering differing perspectives, Richard Gaillardetz of Boston College and Chad Pecknold of The Catholic University of America agreed March 26 that clericalism needed to be addressed if the church is to begin recovering from the scandal.

Pope Francis has described clericalism as an attitude embraced by priests and bishops in which they see themselves as special or superior to others.

Gaillardetz explained that clericalism manifests itself in “the maintenance of a distinct clerical identity” that often lacks solidarity with the people of God, a sense of being “exempt from criticism or accountability by those outside the clerical guild, and an instinct “to protect the good reputation of their guild at all costs.”

On the other hand, Pecknold theorized that clericalism stems from a willingness to turn away from God and the call to true priestly ministry as exercised by Jesus rather than solely the desire to maintain power and influence over others.

The theologians supported their arguments in presentations during the latest in the university’s ongoing “Healing the Breach of Trust” conferences.

The conference was the third in a series sponsored by the school’s Catholic Project, which was formed in 2018 to examine the clergy sexual abuse scandal after it erupted again last summer. Subtitled “What’s Really Going On? The Root Causes of the Current Crisis,” the conference’s sessions also explored the role of organizational behavior, sexuality and sexual teaching, and how the media reflects the causes of clericalism.

Gaillardetz argued that the seeds of clericalism rest in the current theology, structures and practices associated with being a bishop. Documents from the Second Vatican Council, he said, support the ideas that place a bishop first in how he relates to the entire college of bishops or in relation to the local church.

“Yet today church law and custom continue to accentuate the bishop’s relation to the episcopal college as a whole and the pope in particular and attenuate his relationship to his flock,” he said.

Gaillardetz identified church practices that he believed “played a role in sustaining and entrenching clerical culture.” He pointed to the Vatican’s practice since the 19th century of appointing bishops with “minimal input” from local churches, frequent transfers of bishops “often as a form of ecclesiastical promotion” from small dioceses to more prestigious ones, and the use of titles such as “your excellency” for bishops, “your grace” for archbishops and “your eminence” for cardinals.

The theologian offered suggestions to minimize clericalism beginning with the development of a “sound theology of the ministerial priesthood” in which ordination is not the “conferral of special powers” but one in which a priest is drawn “into a new relationship with Christ and Christ’s church sent in mission.”

Priestly formation also, he said, could be removed from the “quasi-monastic seclusion” of a seminary and be based in the realities of parish ministry.

He called for wider involvement of the local church, including laity, in the selection of bishops, as was practiced especially during the first four centuries of Catholic Church’s history.

Pope Francis’ call to synodality, the inclusion of many voices in the affairs of the church, also offers a way forward, Gaillardetz said.

“Prayerful listening to the laity by bishops and all clergy, while necessary, is not sufficient if we are really intent on breaking up the clerical sedimentation that exists in our church,” he said. “Or to transpose metaphors, we cannot pour ‘new wine’ of ecclesial synodality into the ‘old wineskins’ of canonical structures still tainted by clerical privilege. What is needed is a richer culture of collaboration in church governance at all levels.”

Pecknold based his arguments on how the church could address clericalism in Pope Francis’ desire “for the priest to be a father and not an executive.” He described the pope’s view on clericalism as “a more interior breach, a breach of the relationship fathers should have to their children.”

Addressing the theological roots of the crisis, Pecknold called for firmer grounding of seminarians in church teaching that stresses God as father. He particularly cited Pope Benedict XVI’s 2005 encyclical “Deus Caritas Est” (“God Is Love”) as offering a way forward for the church in understanding God as father.

Pecknold also expressed concern about celebration of Mass, calling for the liturgy to be “celebrated with the greatest possible reverence for the Lord.” He returned to the writing of Pope Benedict, who said liturgical theologians had taken “great liberties” with the directions on liturgical reform in Vatican II documents.

He said Pope Benedict in his papacy was disturbed by theologians who treated liturgy “as their own invention.” In doing so, Pecknold said, Mass has become a “human performance rather than a solemn work of God that transports us all mystically to Calvary.”

Pope Benedict, Pecknold explained, maintained that such “liturgical relativism” had “reduced the Mass to the immanent frame in much the way metaphysics gets reduced from ‘thinking about being’ to ‘thinking about human power.’ And this brings us full circle back to clericalism.”

Solutions to the abuse crisis, Pecknold said, cannot be seen solely as being carried out through “political rearrangement, review boards, new relations between civil and canon law” because they do not address the root of the scandal. Likewise, he added, seeking solutions to the crisis “by rooting out all deep-seated same-sex attraction, or embracing same-sex attraction,” ending celibacy or opening the priesthood to women “are more at the root of dysfunction than they are at the root of the cure.”

“We must see the crisis as a turn away from the father, and so we must understand that any solution to the crisis will attend to those external forms best suited to returning the interior altars of the heart and mind back to the father,” Pecknold said. “We must find our solution in Abel’s sacrifice and not in Cain’s.”

NEXT: Priests sees progress on abuse, but also resistance in some ‘quarters’