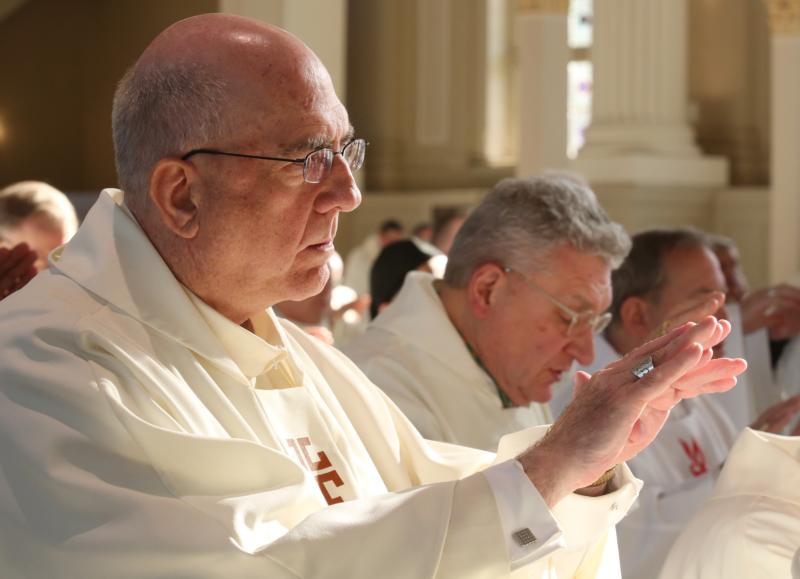 Archbishop Joseph F. Naumann of Kansas City, Kan., prays during Mass in the Chapel of the Immaculate Conception at Mundelein Seminary at the University of St. Mary of the Lake in Illinois, near Chicago Jan. 3, 2019. Archbishop Naumann, chairman of the U.S. Conference of Catholic Bishops’ Committee on Pro-Life Activities, said, “I applaud the Trump administration for working hard to ensure that U.S. taxpayer dollars are not used to perform or promote abortion internationally.” (CNS photo/Bob Roller)

WASHINGTON (CNS) — The chairman of the U.S. Conference of Catholic Bishops’ Committee on Pro-Life Activities said the Trump administration’s move to strengthen enforcement of the policy prohibiting U.S. foreign aid to organizations that perform or actively promote abortion as a method of family planning.

“I applaud this administration for working hard to ensure that U.S. taxpayer dollars are not used to perform or promote abortion internationally,” Archbishop Joseph F. Naumann of Kansas City, Kansas, said in a statement March 28.

“Taxpayer dollars should never fund abortion — and especially not in developing countries where many women need genuine, life-sustaining support for themselves and for their children,” he said. “International organizations should be providing real assistance, real health care, and real opportunities for women, instead of offering to end the lives of their unborn children.”

Archbishop Naumann made the remarks in reaction to an announcement by U.S. Secretary of State Mike Pompeo about the policy Protecting Life in Global Health Assistance, the Trump administration’s new name for the Mexico City Policy.

At a March 26 news conference, Pompeo said the existing policy would be supplemented with new restrictions to prevent backdoor funding of abortions.

The policy “ensures U.S. taxpayer dollars aren’t used to support foreign nongovernmental organizations that perform or actively promote abortion as a method of family planning,” Pompeo said, and now will put a halt on “assistance to foreign NGOs that give financial support to other foreign groups in the global abortion industry.”

He also said the State Department will more faithfully enforce the Siljander Amendment, which prohibits American aid from being directed toward lobbying on either side of the abortion issue. It is a recurring restriction set forth in the annual appropriations for the State Department, foreign operations and related programs; it was first included in 1981.

The Mexico City Policy was created by the Reagan administration; it was announced in 1984 during an international population conference in Mexico City. Since then it has been alternately backed under Republican presidents or removed under Democratic presidents. It was last valid during George W. Bush’s presidency, before being thrown out while Barack Obama was chief executive in 2009.

NEXT: Minnesota sister, 92, honored for lifetime of fighting for human rights