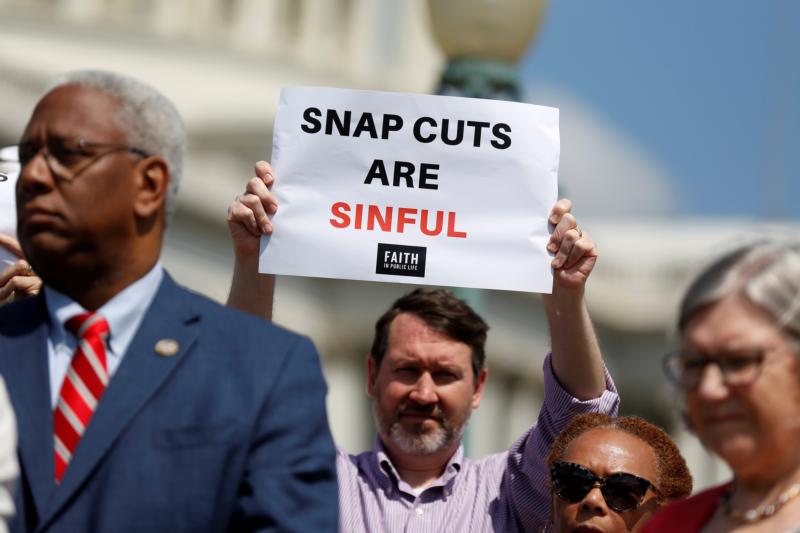 A man holds a sign protesting cuts to the federal Supplemental Nutrition Assistance Program during a news conference on Capitol Hill in Washington May 7, 2018. Catholic advocates planned to be involved in congressional budget hearings throughout the year to stress the importance of funding social and humanitarian programs that serve the common good. (CNS photo/Joshua Roberts, Reuters)

WASHINGTON (CNS) — The U.S. Conference of Catholic Bishops joined representatives of two leading Catholic charitable organizations in calling on a federal agency to withdraw or modify a plan to require some adults receiving food assistance to work or enroll in training programs or lose their government benefit.

In a letter March 27 to the U.S. Department of Agriculture, the Catholic representatives said the proposed regulation “provides only barriers to food assistance while providing little to no additional support” for 1.2 million adults who would see their benefits end if they don’t meet the new government guidelines.

The rule affects able-bodied adults without dependents who currently are eligible for aid under the Supplemental Nutrition Assistance Program, or SNAP, formerly known as food stamps.

“While we welcome efforts to strengthen the implementation of the Supplemental Nutrition Assistance Program to provide greater self-sufficiency, we are deeply concerned that the proposed would negatively impact access to necessary food and nutrition assistance while doing little to support access to programs that promote self-sufficiency,” they wrote.

The rules were developed under the Agriculture Improvement Act of 2018. Among its provisions, it limits the amount of time able-bodied adults without dependents ages 18 to 49 unless they meet requirements that should they are working or participating in a qualifying education and training program for at least 80 hours per month.

Calling access to food “a fundamental human right,” the Catholic representatives said they supported policies which “provide greater support for individuals and families so that they can learn the skills necessary to contribute to the well-being of their families and communities.”

Of the 1.2 million people who could see their benefits end under the rule, 88 percent have a household income at or below 50 percent of the poverty level and one-third of those affected have an average monthly household income of $557, the letter said.

The letter writers also noted that for every $1 billion in SNAP expenditures, $1.79 billion of economic activity is generated annually.

While the proposed rule allows for states to issue waivers based on high unemployment and lack of jobs in a region, the Catholic leaders urged Department of Agriculture officials to carefully consider the needs of individuals “who have fallen on hard times and are struggling to find a way out of poverty.”

However, the letter continued, 89 percent of able-bodied adults without dependents would live in areas ineligible for any waiver.

The trio of leaders said any cut in SNAP benefits would boost food insecurity and require charitable agencies and food pantries to meet the basic needs of hundreds of thousands of people.

“Instead of working to reduce access to food as a means of achieving self-sufficiency, the USDA should work toward fully implementing many of the reforms included in the Agriculture Improvement Act of 2018 which would strengthen state education and training programs and provide more meaningful and effective means for assisting individuals in preparing for and finding dignified work,” the letter said.

They also called for the USDA to encourage states to support SNAP case management services for the group of people affected as they participate in job training, work at a supportive social enterprise or transition into the workforce.