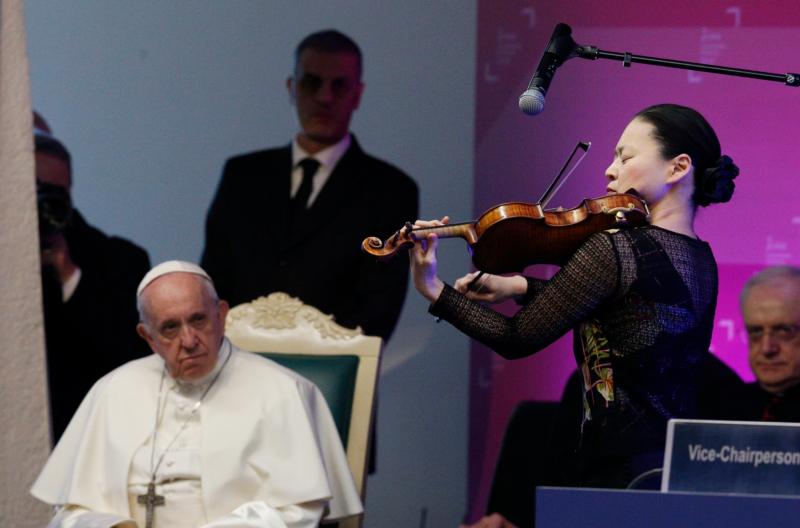 Pope Francis watches as violinist Midori performs at a meeting of the governing council of the International Fund for Agricultural Development at the headquarters of the U.N. Food and Agriculture Organization in Rome Feb. 14, 2019. (CNS photo/Paul Haring)

VATICAN CITY (CNS) — In a world of different religions, cultures and languages, art has the capacity to bring people together and inspire them to take action in addressing critical challenges, said a Vatican official.

That is why the official, Father Augusto Zampini, made sure art and culture played a pivotal role in the international conference he helped organize at the Vatican on what religions could do to help the world reach the U.N. Sustainable Development Goals.

Sponsored by the Dicastery for Promoting Integral Human Development and the Pontifical Council for Interreligious Dialogue, the conference March 7-9 brought together representatives from the world’s major religions.

They discussed how spirituality, religious values and sacred texts all point the way toward safeguarding creation and addressing the challenges of poverty, hunger, inequality, injustice, environmental degradation and other global problems.

That religion, art and culture can and must play a role in building a sustainable future is an idea that had been missing from most international forums, but their input was needed to inspire people to take action, Father Zampini, director of development and faith at the dicastery, told Catholic News Service.

“How many conferences have you heard (about) that are happening on development? Thousands. What is the effect, the consequences, the change that they have produced?” he asked.

Different cultures and the arts are needed “to talk to our hearts so as to allow us to change,” said Father Zampini.

Guided by the theme of “Listening to the cry of the earth and of the poor,” the conference opened by listening to a group of children from a Rome kindergarten and to young people in foster care.

Dressed in matching gym suits, the fidgeting kindergarteners tried to focus on staying in tune, keeping the beat and remembering the words to the song about nature. Many in the audience laughed and smiled when the kids showed more interest in playing than singing and when a little boy offered the grand finale by happily shouting into the microphone, “Goodbye everybody” in Italian before running off.

Inside the conference hall, a New Zealand-born visual artist used permanent markers to turn the white of multiple canvasses into a spectrum of color with images and quotes, capturing the essence of the discussions in ways everyone, regardless of religious or cultural background, could understand.

Using bright neon Post-it notes to jot down themes discussed in the talks, Smith said her work is “more about listening than about drawing,” which in her experience, brings people together.

One of the messages of the conference was “Leave no one behind,” and organizers sought to make sure the voice of marginalized future generations was included by inviting the Simon Bolivar Orchestra of Venezuela to an evening concert of multicultural music and dance March 7. The orchestra members were part of the youth music-education program, El Sistema, that provides free classical music education to impoverished children with the hopes of lifting them out of poverty.

The Venezuelan players also provided the music for the artists from other cultural and religious backgrounds such as the Albanian-Italian dancer Kledi Kadiu, the Buddhist Japanese pianist Hiroko Sato, the Italian Jewish quartet, Progetto Davka, and the Tunisian musician, Marwan Samer.

Organizers said they hoped that the mix of artists throughout the conference would remind people the world does not belong to any one religion or culture, but is a symphony of voices and viewpoints and the only way forward is to move together.