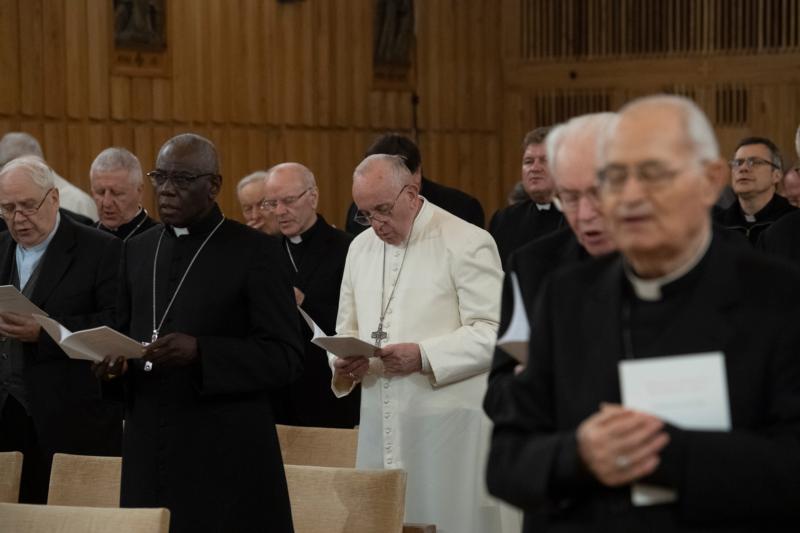 Pope Francis is seen during the Lenten retreat for the Roman Curia in Ariccia, Italy, March 10, 2019. (CNS photo/Vatican Media)

“The pope responded to me that that was a great precondition for doing it well,” the abbot of Florence’s Abbey of San Miniato al Monte told the Vatican newspaper, L’Osservatore Romano.

Pope Francis and 64 members of the Roman Curia left the Vatican March 10 and were driven out to the Pauline Fathers’ retreat house in Ariccia, about 20 miles south of Rome, for the retreat, which was to run through March 15.

Before leaving the Vatican, Pope Francis prayed the Angelus with visitors in St. Peter’s Square and asked them to remember in prayer him and his collaborators from the Curia.

During the retreat, Abbot Gianni was scheduled to give 10 meditations. Most of the rest of the time, the pope and curial officials were to spend in silence. They would celebrate Mass together each morning and end the day with eucharistic adoration.

Pope Francis met Abbot Gianni in 2015 when the Benedictine helped organize the national pastoral convention of the Catholic Church in Italy, and Pope Francis gave several major talks there.

For the theme of the Lenten retreat, the abbot chose a verse,  “The city of ardent desires,” from the late poet Mario Luzi, as well as ideas from Giorgio La Pira, a former mayor of Florence whose sainthood cause is underway.

Abbot Gianni told L’Osservatore that by combining Luzi and La Pira with the teaching of Pope Francis in “The Joy of the Gospel,” he planned to focus on the Christian vocation to transform cities and other earthly realities into places where people would experience God and God’s blessings.

It is not unlike what Benedictine monasteries are called to do, he said. The monks are dedicated to “witnessing love for time, the care of spaces, diligence in work, fraternal life and welcome.”

Everyone in the church, “from the pope on down,” is called to ignite “ardent desires” — holy desires and a longing for virtue — in cities, towns and communities, he said.