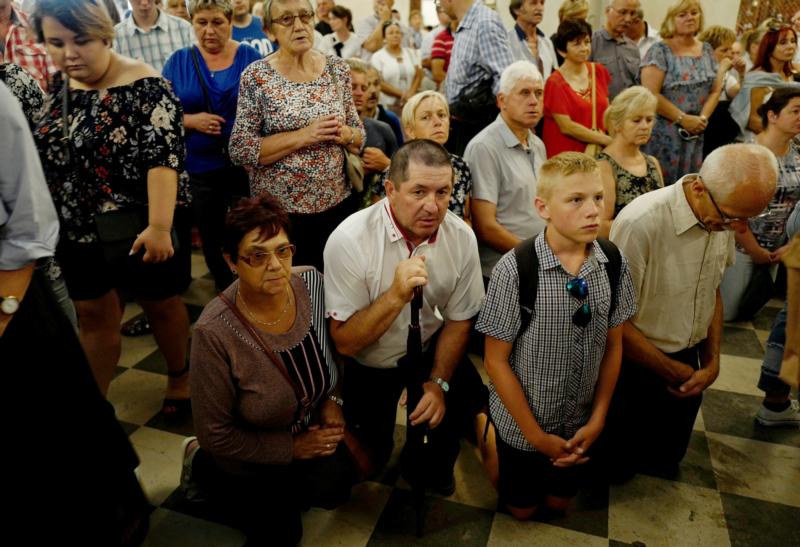 Worshippers pray during celebrations on the feast of the Assumption, Aug. 15, 2018, at Jasna Gora Monastery in Czestochowa, Poland. The Vatican secretary of state praised the Polish church’s traditional closeness to Rome as key to its survival under hostile regimes, in a speech marking the centenary of the nation’s conference of bishops and diplomatic ties with the Vatican. (CNS photo/Kacper Pempels, Reuters)

WARSAW, Poland (CNS) — The Vatican secretary of state praised the Polish church’s traditional closeness to Rome as key to its survival under hostile regimes, in a speech marking the centenary of the nation’s conference of bishops and diplomatic ties with the Vatican.

Cardinal Pietro Parolin told the bishops: “Your indispensable task now is to uphold this heritage, preserving and strengthening it as a rich legacy, so Poland’s Christian identity will have not only a past and present, but also a future.”

In a March 13 address to the bishops’ plenary, the cardinal noted the Polish bishops’ first 1919 assembly had been chaired by Msgr. Achille Ratti, the future Pope Pius XI, who was Vatican representative at the time, and had heralded a Polish tradition of “communion with the Petrine see and faithfulness to the bishop of Rome,” which reflected the key Catholic principle of “unity in diversity.”

“Unity with the pope also guarantees freedom in the face of worldly powers and particular interest groups,” Cardinal Parolin told the plenary, which also celebrated the sixth anniversary of the election of Pope Francis.

“It assures openness to the universal church, as well as full catholicity, guarding against the danger of closing in on oneself or being exploited by some faction, whether political or nationalist.”

He also led a Mass for the pope in Warsaw’s Divine Providence Basilica. Archbishop Salvatore Pennacchio, Vatican nuncio, and Cardinal Kazimierz Nycz concelebrated the Mass, which was attended by top state and government officials.

In his plenary address, Cardinal Parolin said Europe was in danger of “forgetting its Christian roots” and losing a “continentwide concord achieved at great cost” in face of “growing influences from individualist, nationalist and separatist thinking.”

He added that the church’s challenge as “an instrument of reconciliation and unity in society” was now “more current than ever,” but said Poland remained “marked by deep divisions, disputes and conflicts” and needed help from the church in building agreement.

“Poles must learn to engage in a dialogue of truth and to respect each other’s dignity, differing from one another without becoming enemies as a result,” Cardinal Parolin said, quoting a 1993 speech by St. John Paul II to Poland’s bishops.

“Europe needs Christian testimony, an authentic example of living faith, as well as national unity and a welcoming, open and full respect for others.”

Besides addressing the bishops’ March 12-14 plenary, which was attended by Catholic bishops from 11 other countries, Cardinal Parolin held talks Polish government leaders.

The Polish bishops met amid political tension before May 23-26 European Parliament elections and following publication of a report by a Polish victims’ group, which accused 24 serving and retired bishops and archbishops of covering up sexual abuse by Catholic clergy.

Most of the country’s archdioceses have criticized claims in the report, which was personally received by the pope Feb. 20, and the bishops’ conference is to publish a “statistical list” detailing abuse cases since 1990, according to Poland’s Catholic Information Agency, KAI.

In a March 13 statement, the bishops condemned an LGBT Charter currently promoted by local officials in Warsaw and other towns to enhance homosexual, bisexual and transgender rights, arguing it would “threaten the continent’s future” by undermining “gender differences favored by God” and fostering “an alternative vision of the person out of step with the truth of human nature.”