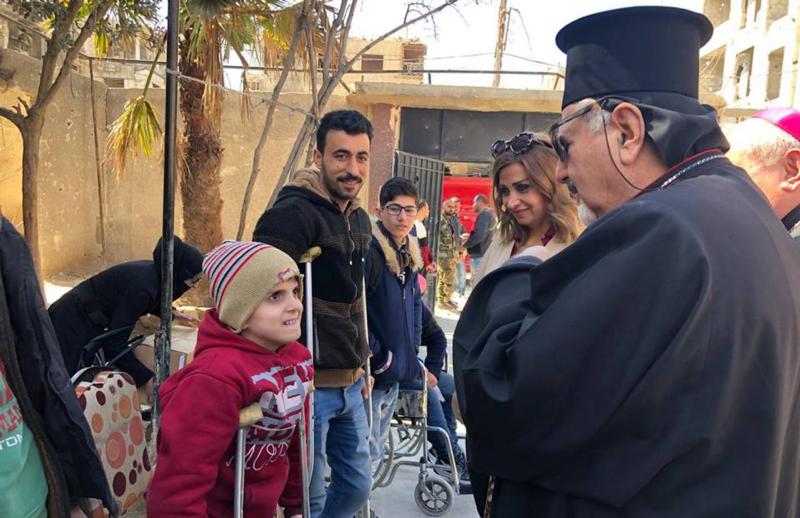 “In every face, mostly the children,” was a “very confused” expression, Syriac Catholic Patriarch Ignace Joseph III Younan told Catholic News Service. The March 6 visit was part of the annual session of the Council of Heads of Catholic Churches in Syria.

Patriarch Younan said the overall reaction of the prelates while visiting Douma, the major city of eastern Ghouta, “was deep sadness and repulsion” in seeing “the horrible destruction of that region, held hostage for such a long time by radical Muslims.”

Patriarch Younan noted that “evidently, this visit had an impact on Cardinal Tagle, who expressed his deep grief in front of so much suffering,” adding that the cardinal compared the scenes to an earthquake or typhoon.

“Besides the humanitarian assistance so much needed and the urgent help to rebuild their city, it is mostly and, first of all, hope and dignity that this courageous community was looking for,” the patriarch added.

In addition to Patriarch Younan and Cardinal Tagle, participants in the meeting and the Ghouta outreach included Cardinal Mario Zenari, apostolic nuncio to Syria; Melkite Catholic Patriarch Joseph Absi, who hosted the March 4-6 council session at the patriarchate in Damascus; and Catholic bishops of Syria.

Ghouta, the last rebel bastion east of the capital city of Damascus, was secured by the Syrian government in April 2018. At one point, some 400,000 people were under siege in Ghouta, according to the United Nations. It was the site of alleged chemical attacks.

Patriarch Younan characterized the suffering in the city as “unspeakable.”

“It is shameful that the so-called free world was accomplice to that disaster for no reason than satisfying the greed and opportunism of its politicians. All fake news of the agglomerate media, like the show play of chemical attacks attributed to the Syrian soldiers, were based on lies, in order to keep the fighting going on,” Patriarch Younan said.

“Less than a quarter of the population could return without any harassment and managed to find lodging, despite the destruction and the harsh winter,” he said of the situation. The patriarch pointed out that in Douma, there had been 50 schools. To date, the government has rehabilitated 20 of them.

The elementary school the prelates visited “was packed” with 1,800 children, he recounted. “It will take a long time for the children to heal from the trauma they lived.”

“The youth we encountered, though hesitant and confused, were looking to start their life again,” Patriarch Younan said. “We saw a number of them responding to the draft in the military service, judging it as a best try to restart.”

Patriarch Younan said he, Cardinal Tagle and Patriarch Absi “assured the people of our prayer and solidarity and planted three olive trees on the school grounds, as a symbol of revitalized life.”

In their March 6 statement at the conclusion of their meeting, the Council of Heads of Catholic Churches in Syria said they addressed the “difficult humanitarian and social situation facing the Syrian people as a result of the conflict taking place in their homeland and the sanctions imposed on them from abroad.”

The prelates urged the international community and international organizations to lift sanctions, noting that the poorest are affected.

The council pointed to their Ghouta visit “to express their care and closeness to their suffering and destitute Syrian brothers,” noting that they spoke and listened to the people as an expression “of their love and solidarity.”

The council expressed “satisfaction at the security and stability achieved by the Syrian state and the Syrian army in most areas of Syria thanks to their great sacrifices and wise policies.”

It also thanked “all those with goodwill who are working to show the true picture of the Syrian crisis and lend a helping hand to the Syrian people.”

NEXT: Pope: God is purifying the church with ‘unbearable’ pain of abuse scandal