Caring for the ill should include spiritual assistance, pope says 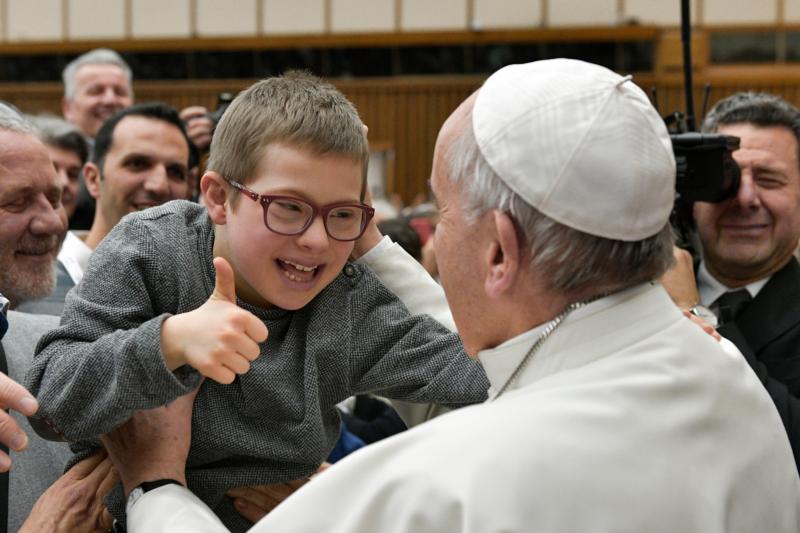 Pope Francis greets a child during an audience with members of Italy’s Association Against Leukemia, Lymphoma and Myeloma at the Vatican March 2, 2019. The pope said providing care to the sick should include taking care of their spiritual needs. (CNS photo/Vatican Media)

VATICAN CITY (CNS) — Taking care of those who are sick or struggling with illness requires taking care of the whole person — including their spiritual needs, Pope Francis said.

Offering care and healing is focused not just on “the disease of an organ or of cells but of the person in his or her entirety,” he said.

“The fact that the spirit transcends the body means that this is included in a greater vitality and dignity, which is not that of biology, but that of the person and the spirit,” the pope said March 2.

The pope was speaking to members of Italy’s national Association Against Leukemia, Lymphoma and Myeloma, which was celebrating its 50th anniversary. Those in the audience included health care professionals, volunteers, researchers, patients and relatives.

The pope encouraged those doing scientific research and praised those assisting and offering comfort to the suffering and ill.

“Like Mary, who remained at the foot of Jesus’ cross, volunteers, too, remain at the bedside of those who suffer,” he said. They understand the importance of being close to and tenderly consoling patients, especially since they are prone to feeling isolated and separated from the rest of the world, he added.

Pope Francis said that all those who are ill are not alone — “the Lord, who endured the difficult experience of pain and the cross, is there beside them.”

Because of the spiritual and fraternal witness and service of hospital chaplains, deacons and extraordinary ministers, the entire faith community becomes part of a “healing community” seeking to respond to Jesus’ desire that they all be one body, “starting with the weakest and most vulnerable.”