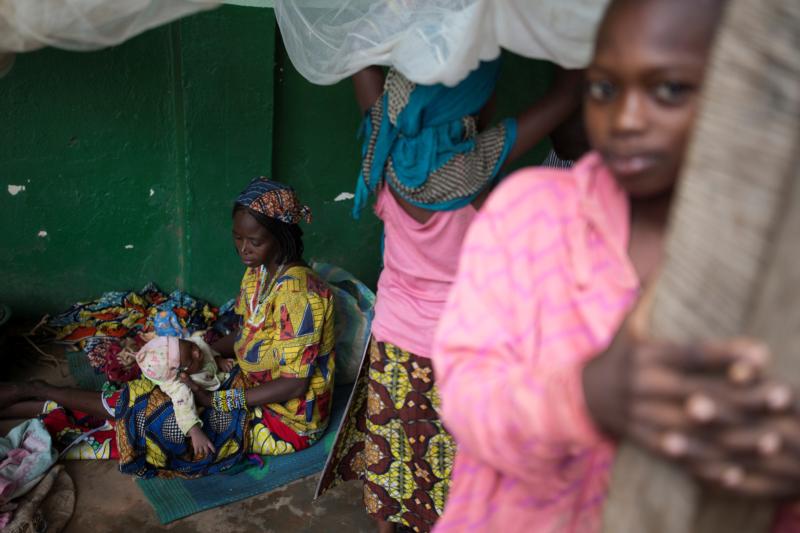 A woman holds her baby at a shelter for displaced people in Bangui, Central African Republic, April 24, 2017. Pope Francis, along with other donors, inaugurated the opening of a $3.4 million refurbished and expanded pediatric medical center in that same city March 2, 2019. (CNS photo/Baz Ratner, Reuters)

VATICAN CITY (CNS) — Whoever takes care of children is on God’s side and fights today’s throwaway culture, Pope Francis said.

In fact, people will encounter Christ every time they encounter and are attentive to the needs of children, especially those who are suffering and fragile, he said in a video message inaugurating the opening of a refurbished and expanded pediatric medical center in Bangui, Central African Republic.

The center was renovated with $3.4 million from the pope’s charitable funds and hundreds of thousands from other donors, including the Vatican police, who held a variety of fundraising events. Bambino Gesu pediatric hospital near the Vatican and other organizations helped provide staff training and support. Cardinal Konrad Krajewski, the papal almoner, and Mariella Enoc, president of Bambino Gesu, were among those present at the medical center for the inauguration ceremony March 2.

In his video message, Pope Francis recalled meeting a group of children suffering from malnutrition during his visit to the hospital in Bangui in 2015. Their ward was a tent; the newly expanded facility includes an 8-bed Center for Therapeutic Re-nutrition.

Pope Francis said he could still see the pain in eyes of the children he met that day. He said the doctor who accompanied him had said most of those children would die because they were affected by both malaria and malnutrition.

“No. This must never happen. The suffering of children is without doubt the hardest thing to accept,” the pope said in the video.

In his message, the pope said, the new facility was a concrete sign of mercy and those working to help the children were “artisans of mercy.”

“Whoever takes care of children is on God’s side and conquers the throwaway culture.”

PREVIOUS: Caring for the ill should include spiritual assistance, pope says

NEXT: Vatican announces theme for World Day of Migrants and Refugees