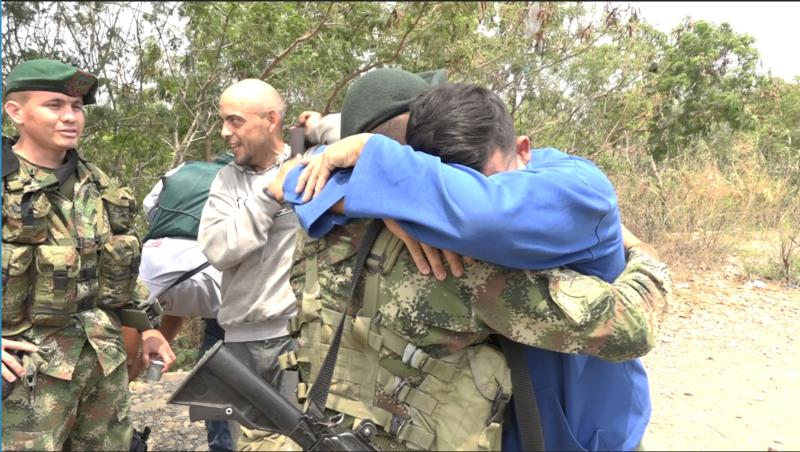 Pvt. Andry Rosales hugs a Colombian soldier after defecting from Venezuela Feb. 27, 2019. Rosales snuck out of an army base and crossed into Colombia in civilian clothes. (CNS photo/Manuel Reueda)

CUCUTA, Colombia (CNS) — Pvt. Andry Rosales hugged a Colombian soldier and broke into tears as he surrendered himself to this country’s military.

The 21-year-old Venezuelan soldier had sneaked out of his army base across the border early in the morning and crossed into Colombia by walking on a dirt trail used each day by hundreds of migrants who enter Colombia illegally. He carried only a small backpack and wore civilian clothes, which helped him avoid Venezuelan border guards.

“We have a terrible dictatorship there,” Rosales said, wiping tears from his face as he was escorted to a Colombian immigration office. “We were given orders to repress protests and shoot at people, even if they were our relatives.”

As political unrest increases in Venezuela, hundreds of soldiers and police officers are deserting and seeking shelter in neighboring Colombia.

The Catholic Church and other religious groups in the area are responding to this new chapter of Venezuela’s humanitarian crisis by providing shelter for these deserters and helping them to apply for asylum.

“Many of us are living in fear,” said a 23-year-old soldier who defected in late February and is now living in a hotel room paid for by the Diocese of Cucuta. He did not want to have his name published, fearing reprisals against family members still living in Venezuela. “We don’t know how much this help will last, but we are very grateful for everything we have gotten so far.”

The defections of Venezuelan soldiers started to increase Feb. 23, when Venezuela’s opposition tried to deliver several trucks of food and medicine into the country across three border bridges in Cucuta and via a remote road that connects Venezuela with Brazil.

The aid was provided mostly by the U.S. government, and it was vehemently rejected by embattled President Nicolas Maduro, who said it was part of a plot to replace him with opposition leaders, who have promised to hold new elections. A constitutional crisis reached a critical point following Maduro’s inauguration Jan. 10. Allegations of rigging by local and international monitors prompted Juan Guaido, who was president of the opposition-led legislature, to assume the presidency.

On Feb. 23, Maduro ordered his troops to disperse civilians who attempted to escort the aid into Venezuela, and clashes quickly erupted along Venezuela’s borders with Colombia and Brazil. At least seven people died.

Amid the mayhem, Venezuelan soldiers started to flee into Colombia, saying they were sick of following Maduro’s orders.

According to Colombia’s immigration authorities, more than 500 Venezuelan soldiers and police officers have fled into the country since Feb. 23. Most are now staying in shelters and hotels guarded by Colombian troops.

The defectors are mostly low-ranking soldiers who say they are tired of repressing protests within Venezuela and also feel demoralized by salaries of about $20 a month. Many say those salaries have left them hungry and impoverished.

“In most countries, being in the military is a great career” said Lt. Henri Ramirez, who fled into Colombia recently. “But I couldn’t even afford to buy diapers for my baby daughter.”

The Diocese of Cucuta is currently providing accommodation for 90 deserters and their families in hotel rooms, through a project known as the Multisector Response to the Venezuela Migrant Crisis. The initiative also provides the soldiers with legal advice and support from psychologists, who are helping them to deal with problems like depression and anxiety.

Carlos Torrado, project director, said the initiative is new and was initially designed to help vulnerable migrants coming into Colombia with their families. But the project has temporarily shifted its attention toward defecting soldiers.

“There were few agencies here who were ready to work with this population and respond to this emergency,” Torrado told Catholic News Service. “These soldiers are also migrants, with lesser, equal or greater needs than other migrants.”

Torrado said the project is now working at full capacity; other charitable organizations also have become involved in helping these refugees.

The Catholic Apostolic National Church — a breakaway church — is providing shelter to 45 Venezuelan soldiers in a home for migrants it has been running since last year.

Father Sergio San Miguel, the shelter’s director, said he has been working with defecting soldiers since last year and initially had space for only 15 people. But he tripled his shelter’s capacity in late February to respond to the current influx of Venezuelan military defectors.

“Some of these soldiers have arrived here wearing their uniform and with nothing else,” Father San Miguel said. “But the local community has helped out with clothing and food.”

Venezuelan government officials have described the defectors as traitors and have threatened to arrest them if they return to the country.

But Father San Miguel said he will continue to work with the soldiers, even if it compromises his church’s relations with the Venezuelan government.

“You can’t get to heaven with clean feet,” he said. “We will have eternity to rest, but in the meantime we must continue to work for our brothers in need.”

NEXT: Nicaraguan bishops say they have not been invited to national dialogue