Nicaraguan bishops say they have not been invited to national dialogue 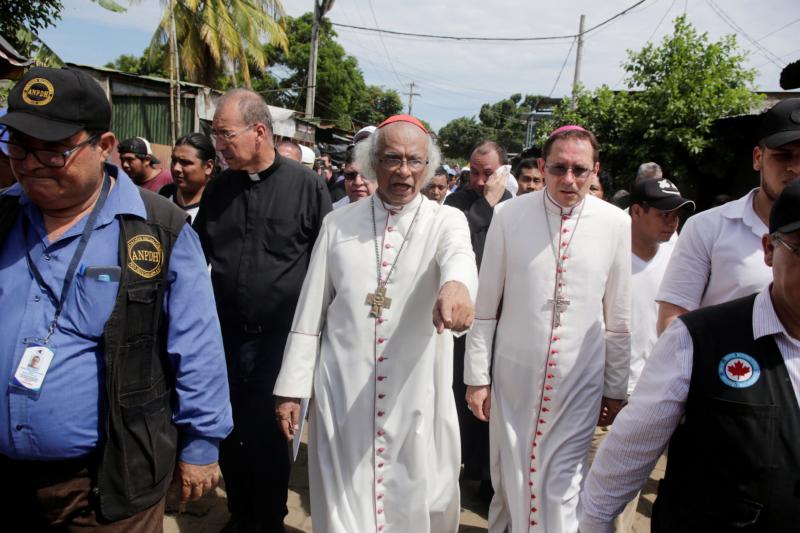 Cardinal Leopoldo Brenes Solorzano and Archbishop Waldemar Sommertag, apostolic nuncio to Nicaragua, are seen in Masaya, Nicaragua, June 21, 2018, as clashes between anti-government protesters and police continued. The Nicaraguan bishops’ conference announced March 4 it has not received invitations to play a role in a recently convened national dialogue to pull the nation out of political crisis. (CNS photo/Jorge Cabrera, Reuters)

MANAGUA, Nicaragua (CNS) — The Nicaraguan bishops’ conference said it has not received invitations to play a role in a recently convened national dialogue to pull the nation out of political crisis.

In a statement issued March 4, the bishops said Managua Cardinal Leopoldo Brenes, conference president, let it be known at the opening session of the dialogue Feb. 27 that both sides would have to issue letters inviting the church to participate.

“We have not received any correspondence in this respect,” said the statement, signed by the conference secretary-general, Bishop Juan Mata Guevara of Esteli.

“We understand that we are not of such inescapable necessity for said negotiations and that, in this historic moment, our main support as pastors of this church … will be accompanying the people,” the statement continued.

“A few hours from starting the Lenten journey with Ash Wednesday, we exhort believing people to intensify their prayer and fasting for our homeland.”

Dialogue has proved difficult in Nicaragua as President Daniel Ortega has stubbornly clung to power and rebuffed proposed solutions — such as holding early elections — to the political crisis.

Protests erupted in April 2018 over reforms to the country’s social security institution, and people took to the streets to demand Ortega’s ouster. Ortega responded by unleashing police and paramilitaries on protesters, while loyalists to his Sandinista party attacked opponents, including priests, who turned parishes into refuges and field hospitals.

Early last year, the bishops’ conference convened a national dialogue in an attempt to find a solution, but talks broke down within months.

The death toll in Nicaragua topped 300 in 2018, according to international human rights groups. Amnesty International said in a report that police and paramilitaries implemented a “shoot to kill” policy on protesters.