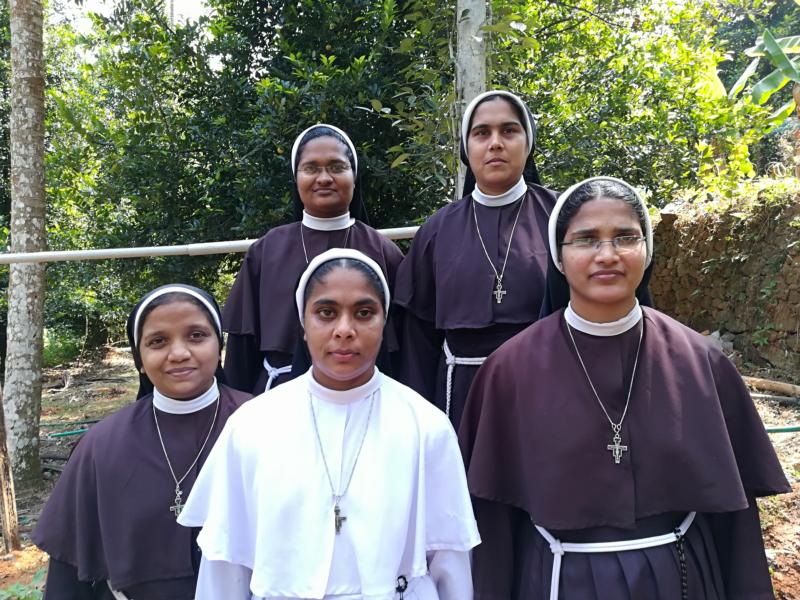 Missionaries of Jesus sisters pose for a photo Jan. 23, 2019, in Cochin, India. They prostested the alleged rape of their former superior by a bishop. (CNS photo/Saji Thomas, courtesy Global Sisters Report)

COCHIN, India (CNS) — As the Vatican grapples to devise stronger protocols and responses following a historic summit focused on clergy sex abuse of minors, five nuns in India complain of church repression for their support of a former superior general who was allegedly raped by a bishop.

“The Catholic Church leadership has been treating us as outcasts after we went public against Bishop Franco Mulakkal (of Jalandhar). Even the Vatican has not bothered to acknowledge our complaints,” Sister Anupama Kelamangalathuveli, spokeswoman for five Missionaries of Jesus nuns, told Global Sisters Report.

The sisters seek attention from the Vatican to the plight of women religious abused by clergy, with clearer protocols and more protection. For now, the five sisters are living with the victim in a convent in Kerala state, refusing orders to return to their own communities while the case is ongoing. They are caught in a wrangle between a bishop who supports their refusal and their congregational leadership, and they endure the rancor of sisters in their community who ridicule them and discount the victim’s allegations.

The sisters rallied behind their former superior general who, on June 28, complained to the police in Kerala that Bishop Mulakkal had sexually abused her multiple times, from 2014 to 2016. Sister Kelamangalathuveli said the victim first wrote to church authorities in January 2017, the apostolic nuncio in India in January 2018, and then to the pope May 14, seeking church action against Bishop Mulakkal. She copied prefects of the congregations for the Doctrine of the Faith and for Bishops, and later sent reminders before going to the police. She has received no response, Sister Kelamangalathuveli said.

Bishop Mulakkal has consistently denied the allegations and claimed the case was due to the nun’s personal vendetta for his initiating disciplinary action against her. He was then the patron of the congregation that comes under the Jalandhar Diocese in northern India.

However, he stepped down from diocesan oversight in mid-September, and on Sept. 20, the Vatican appointed retired Auxiliary Bishop Agnelo Gracias of Mumbai as the Jalandhar Diocese’s administrator.

Sister Kelamangalathuveli told Global Sisters Report the only positive gesture they have received from the church so far has come from Bishop Gracias. The administrator stayed an order from Sister Regina Kadamthottu, superior general of the Missionaries of Jesus, four of the nuns to return to their assigned convents.

Having learned about the alleged rape and early backlash against the victim, the four nuns — Sisters Josephine Villoonnickal, Alphy Pallasseril, Ancitta Urumbil, and Kelamangalathuveli — rushed to offer moral support in April before the complaint was filed. They left their convents in different parts of India and went to St. Francis Mission Home in Kuravilangad, the congregation’s convent where the rape survivor lives along with their fifth companion, Sister Neena Rose.

The five then joined a sit-in in September; on Sept. 21, Bishop Mulakkal was arrested and subsequently imprisoned, before being granted bail Oct. 15.

The Kerala Catholic Bishops’ Council criticized the nuns for stirring up enemies of the church. Their superior and her council issued the transfer orders requiring them to return to their original convents.

The five sisters ignored the orders, labeling them as part of “a well-orchestrated strategy” to sabotage the case. “They know our sister (the victim) will not be able to fight the case if she is isolated. They can then win the case easily,” said Sister Kelamangalathuveli.

On Feb. 3, Bishop Gracias stayed Sister Kadamthottu’s transfer orders and asked the four sisters through email to remain at Kuravilangad until the case was completed.

“It was the first official communication we got from a church authority. We felt delighted,” Sister Kelamangalathuveli told Global Sisters Report.

Bishop Gracias’ intervention came after several social leaders and rights groups — including a prominent Hindu leader — condemned Sister Kadamthottu’s orders as an attempt to intimidate the five key witnesses and weaken the case. Bishop Gracias expressed surprise and dismay over the transfer orders and said he was away from Jalandhar when they were issued Jan. 3. The bishop also assured the nuns that “as far as (it) lies within my power, there will be no move from the Diocese of Jalandhar to oust you from the Kuravilangad Convent as long as you are needed for the court case.”

Bishop Gracias later said told Global Sisters Report by phone, “Canonically it is true that they are supposed to go back to their respective places of posting, however, in view of the current situation, it is not possible for them to do so.”

The superior general did not respond to several calls from Global Sisters Report.

Meanwhile the Kerala government stepped up security for the five nuns after Father Kuriakose Kattuthara, another witness in the case, died four days after Bishop Mulakkal returned to Jalandhar following his release on bail. The autopsy report said the death was natural, but the priest’s friends suspect otherwise, saying he was under great mental strain after the bishop was freed on bail.

The superior general wrote back saying the congregation has no money and that she had no objection if the police shifted the five nuns to a government shelter.

“This was another ploy from the superior to dismiss us from the congregation,” Sister Kelamangalathuveli alleged.

The rape case and the nuns’ protest have become a watershed in the Indian church, said Father Augustine Vattoly, who was working with the five nuns until he was recently pressured by the diocese to step down.

“While the case exposed the church, the nuns’ protest became part of the Indian church history. The five will be proved right sooner or later,” he said.

Sister Kelamangalathuveli says the Kuravilangad convent has four other nuns, all Mulakkal supporters, who often taunt and harass the rape survivor and the other five sisters.

The local superior asked them not to work in the garden and threatened to file a police case against workers the sisters had called to assist them.

Life in the convent has been tense, Sister Kelamangalathuveli said. All 10 nuns come together only when they have occasional Mass in the convent. Otherwise the two groups pray separately.

Thomas is a freelance journalist based in Bhopal, India. This article is part of a collaboration between GSR and Matters India, a news portal that focuses on religious and social issues in India.

NEXT: God’s kingdom comes through gentleness, not violence, pope says