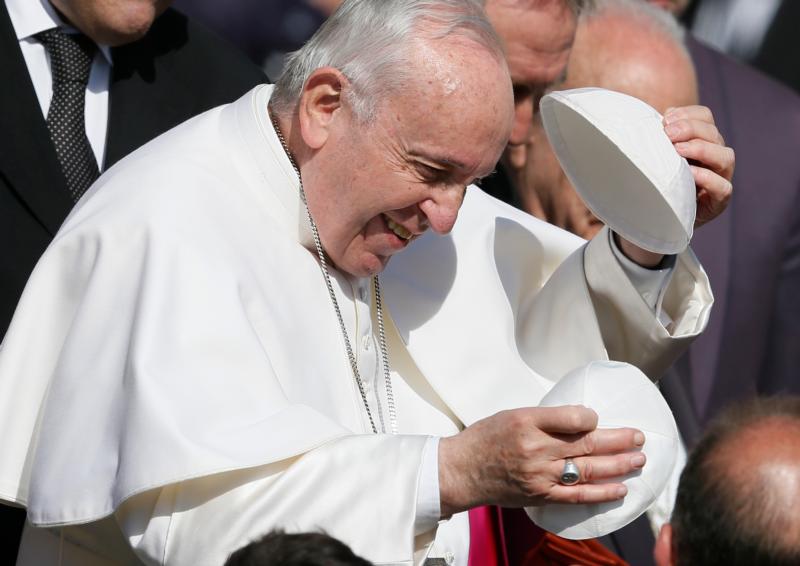 Pope Francis tries a zucchetto given by someone in the crowd during his general audience in St. Peter’s Square at the Vatican March 6, 2019. (CNS photo/Paul Haring)

VATICAN CITY (CNS) — The kingdom of God is being established slowly in the world through patience and gentleness and not by violence or force, Pope Francis said.

Jesus’ petition for his father’s kingdom to come “is not a threat at all; on the contrary, it is a happy announcement, a message of joy,” the pope said March 6 during his weekly general audience.

“Jesus does not want to push people to convert by sowing fear of God’s impending judgment or guilt for the evil done. Jesus doesn’t proselytize, he simply announces” the good news of salvation, he said.

Continuing his series of talks on the Lord’s Prayer, the pope reflected on the phrase “thy kingdom come,” which heralds a time of conversion for all men and women.

Although Jesus came into the world and conquered sin and death through the cross, the pope noted, the “world is still marked by sin and populated by so many people who suffer, by people who do not reconcile and do not forgive, by wars and so many forms of exploitation.”

The fact that men and women still live “with their hearts closed” is proof that Jesus’ victory has not been fulfilled completely, the pope said.

“It is especially in these situations that the second invocation of the Our Father emerges on the lips of Christians: ‘Thy kingdom come,'” the pope said. “That is like saying: ‘Father, we need you. Jesus, we need you; we need you everywhere and forever to be Lord among us! Thy kingdom come; may you be among us.'”

By comparing the kingdom of God to a grain of wheat that must “die” in order to bear fruit, Jesus uses the “eloquent” symbol of a seed to teach men and women that the joyful coming of the Lord is not the work of human effort but an act of love by God alone, he said.

“A seed that sprouts is more a work of God than that of the person who sowed it,” the pope explained. “God always precedes us, God always surprises us. Thanks to him, after the night of Good Friday, there is a dawn of Resurrection capable of illuminating the whole world with hope.”

Pope Francis called on Christians to pray for the coming of the kingdom and to use those words to give hope to “those who have been defeated and bent by life, to those who have tasted more hatred than love.”

“Let us trust this” prayer, the pope said. “And when we pray the Our Father, we always say, ‘Thy kingdom come’ so that we can hear the Lord’s response in our hearts: ‘Yes, yes. I am coming soon.'”

NEXT: Number of priests declined for first time in decade, Vatican says