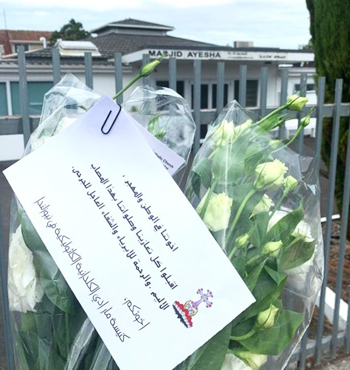 Members of the Chaldean Catholic community in Papatoetoe, New Zealand, placed flowers and a tribute outside Ayesha Mosque after the March 15, 2019, attacks on two mosques in Christchurch. The message reads in part: “Please accept our prayer and condolences in this terrible, painful time. God have mercy on the people and we pray for the injured ones. Your brothers, St. Addai Catholic Church, New Zealand.” (CNS photo/courtesy NZ Catholic)

AUCKLAND, New Zealand (CNS) — The St. Addai Chaldean Catholic community in suburban Auckland felt the impact of the Christchurch mosque killings with a special poignancy, because many members have experienced the sufferings inflicted by terrorism.

“There is a lady in my community — they beheaded her son in front of her,” Chaldean Father Douglas Al-Bazi told NZ Catholic. “Another man, they killed his parents in front of him.”

Father Al-Bazi, who was kidnapped for nine days by Islamic militants in 2006 in Iraq, suffering serious injuries — including being shot in the leg by an assailant wielding an AK-47 — said that when he heard of the events in Christchurch, he was “really angry.”

“There were thousands of questions in my head, and also for my people,” he said.

He said he told his parishioners that “we fully understand as Iraqi people, especially Christian, we really understand” the pain, “because we are survivors of genocide, systematic genocide.”

“I am still shocked, me and my people, how this could happen here in New Zealand,” he added.

Father Al-Bazi said people at his church have said they are scared in the wake of the events in Christchurch, fearful of revenge attacks.

Parishioners placed a floral tribute with a message of support in Arabic outside a local mosque the day after the shootings.

Father Al-Bazi said most of his community came to New Zealand seeking a safe place, and the violence that happened in Christchurch is unacceptable.

“I don’t know what we can do for those survivors, for those relatives, the only thing we can do is pray for them and say, ‘This is not New Zealand.'”

At the end of Mass March 18, everyone at St. Addai Church sang the national anthem, “God Defend New Zealand” in Maori and in English.

Police were stationed outside the church and told Father Al-Bazi, “It is for your protection.” The priest said he asked the officers to park a little down the road, so as not to alarm Massgoers.

Otto is editor of NZ Catholic.

PREVIOUS: ‘Our only hope is in God’: New Zealanders gather to pray after shooting