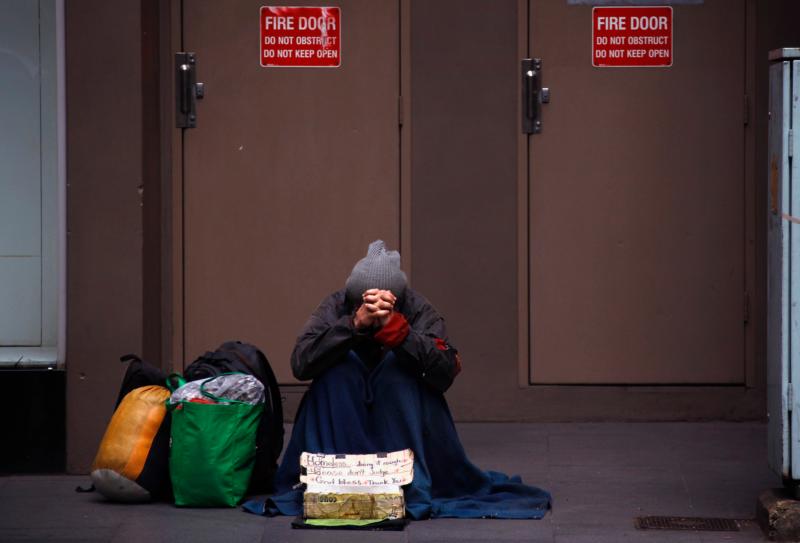 A homeless man begs for money on a street in Sydney Oct.14, 2014. While country has one of the world’s highest levels of average net wealth per person, nearly 3 million Australians, including more than 730,000 children, live in poverty. (CNS photo/David Gray, Reuters)

CANBERRA, Australia (CNS) — Australia’s bishops have called for a significant increase in the national minimum wage to support low-paid Australians and their families.

The Fair Work Commission, Australia’s labor regulator, “has failed to provide reasonable support for the hundreds of thousands of wage-dependent families who do not have a decent standard of living by contemporary standards,” the conference said in a March 17 statement.

The commission, which raised the minimum wage by 3.5 percent in 2018, “has failed to alleviate the suffering and disadvantage of hundreds of thousands of children who are living in poverty in working families,” it said.

The value of the minimum wage, relative to national wage levels, has decreased significantly over the past two decades, the conference said.

In its submission to the commission, the bishops argue that the national minimum wage be increased to 20 Australian dollars (US$14.21) an hour. The minimum wage is currently US$13.45 before tax.

“Neither employers nor governments are doing enough to support low-paid Australians, and particularly Australian families,” the bishops said.

Noting a celebrated 1907 court ruling that people in full-time work with dependents should not live in poverty, the bishops said the “current level of the minimum wage falls far short of the objective identified and set” in that ruling.

While Australia “has a much greater economic capacity to support working families and protect children against poverty than it did more than a century ago, including through the modern social safety net, that is not the lived reality for a large number of families,” the bishops’ statement said.

In the past 20 years, the value of the minimum wage, relative to national wage levels, has decreased significantly, it said.

In its 214-page submission to the commission, the bishops’ conference notes that the national minimum wage is set at a level that provides a reasonable wage for a single worker without family responsibilities.

“In other words, what was an inadequate wage for a family two decades ago has become a reasonable wage for a single adult without family responsibilities. That is simply unacceptable,” the conference said.

“The process to reverse two decades of inadequate responsiveness to the economic realities facing families can’t happen overnight, but we believe our recommendations are an important step,” it said.

Australia, which has a population of 24 million people, has experienced more than 25 years of continuous economic growth. While the country has one of the world’s highest levels of average net wealth per person, nearly 3 million Australians, including more than 730,000 children, live in poverty.

NEXT: Nigerian bishops urge government to stop ‘culture of death’