In Syria, Caritas works to promote understanding among neighbors 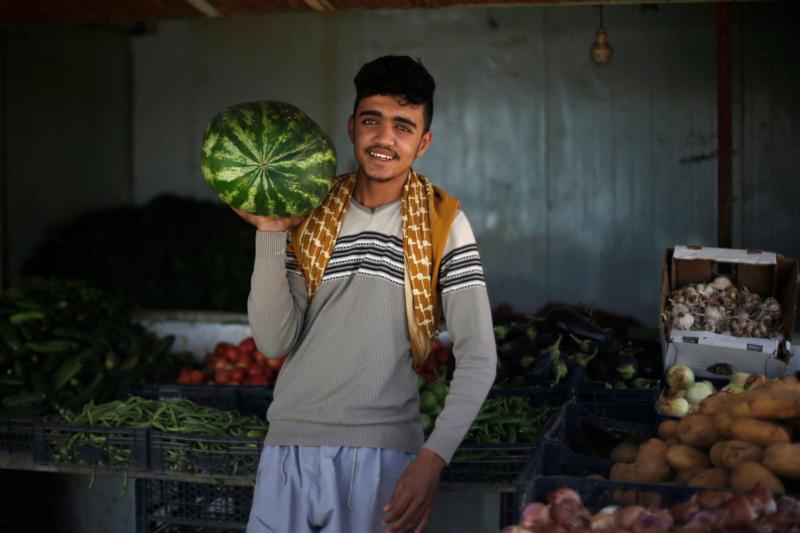 A young Syrian refugee holds a watermelon at his shop in the Zaatari refugee camp near Mafraq, Jordan, June 22, 2018. “A lot of young men left Syria because they didn’t want to fight in the conflict,” Maha Yahya, director of the Carnegie Middle East Center, told Catholic News Service. (CNS photo/Muhammad Hamed, Reuters)

RAMTHA, Jordan (CNS) — As Syria’s civil war enters its ninth year, citizens in and outside the country find themselves in limbo. Catholic and other aid agencies are urging a swift resolution to the crisis.

Caritas Syria is campaigning for “an immediate end to the violence and suffering” and calling for “all sides of the conflict to come together to find a peaceful solution,” chiefly through reconciliation work.

“We are initiating reconciliation among the various communities to correct misconceptions in the minds of those living in Damascus, Ghouta, Aleppo and elsewhere about people outside their religious community,” said Sandra Awad, communications director for the Catholic aid agency Caritas Syria.

Awad told Catholic News Service by telephone from Damascus that a meal involving Christians, Alawites and Muslims brought about a wonderful understanding and compassion for the suffering shared by all.

She said a Christian woman told her at the start of the lunch that she did not want to sit next to a woman wearing a headscarf because Muslims had kidnapped her son. Militants had entered her home and beat her son, resulting in psychological problems for him. They shot another son’s legs, leaving him paralyzed. The militants kidnapped the third son with his wife and child.

But Awad said she told her, “This woman with the headscarf lost her husband from mortar shelling, and her 15-year-old son lost his legs. She is taking care of her children by herself without any income.”

The Christian woman then responded: “Yes, all of us have suffered.”

“I could see her ideas begin to change,” Awad said. “The people spoke about the pain they experienced during the war. They began to feel that people have suffered as much as themselves and perhaps even more,” she said and, as a result, they got along together.

During a Caritas-sponsored visit to the Damascus suburb of Ghouta, a Muslim man questioned why militants were calling for people to be killed, rather than supported.

Caritas’ reconciliation efforts underline the practical support it provides to thousands of Syrians by distributing food baskets, clothes and blankets as well as medical assistance and psychosocial support.

Pope Francis has been closely engaged with the Syrian crisis, consistently calling for an end to the fighting. He has acknowledged the assistance Caritas gives to Syrians regardless of their ethnic or religious affiliation as the best way to contribute toward peace.

Syria’s war has killed more than 400,000 people and forced more than 6 million Syrians out of their homes inside Syria; 5.5 million have fled to neighboring countries since the outbreak of the conflict in 2011.

In a statement provided to Catholic News Service, CAFOD said it “believes that until a political process addresses the underlying issues that led to the Syrian war, there will be no safe future in Syria for the millions of Syrians caught up in this conflict.

Syrian refugees sheltering in neighboring Jordan and Lebanon, many for longer than they ever imagined, have expressed concern for their future.

“My family believes that we cannot return to Syria because our home was destroyed, so there is nothing to go back to,” Um Mohamed, using her familial name in Arabic, told CNS in the northern Jordanian border town of Ramtha, which abuts Syria. “But we’re also finding it impossible to stay in Jordan because there is no work, my husband is sick, and our savings are running out.”

Another Syrian refugee at the large Zaatari camp, also near the border, said she is worried about her son left behind in Syria.

“He was living in an area controlled by the rebels, although he didn’t fight with them. But because of being in that place, he and other young Syrian men have turned themselves into the Syrian authorities in the hopes of getting a lesser jail term,” Um Sami told CNS, saying the Syrian government views them with suspicion.

“But the fear is that the government will forcibly conscript these men into the Syrian military and put them in frontline positions without any training. Or, what if my son is never seen again?” she said, her eyes welling with tears.

Other Syrian refugees are fearful that the regime considers them “traitors.”

“A lot of young men left Syria because they didn’t want to fight in the conflict,” Maha Yahya, director of the Carnegie Middle East Center, told CNS.

“A lot of refugees said to me, ‘I left so I don’t kill, and I don’t get killed.’ Even if they go back today, there is a new amnesty law, but there are no guarantees that they won’t be thrown into prison or sent to the frontline,” she explained.

Other refugees around Zahle, near the Syrian border in Lebanon, said they, too, fear a return, but for some there is no other choice.

A Christian aid worker told CNS about a Syrian widow who died unexpectedly in March. She left behind three young children who must go back to Syria to join relatives to care for them. But these family members live in the militant stronghold of Idlib in Syria’s north, making their fate uncertain.

Eight million Syrian children are now in need of assistance, including psychosocial support, according to the U.N. children’s agency, UNICEF.

Syrians live without “peace or war,” Maronite Archbishop Samir Nassar of Damascus, told the Vatican news agency, Fides, March 11. “It’s an uncertain and difficult situation, which is becoming unsustainable for the weakest,” he said.

Archbishop Nassar warned that Syria’s historic Christian population has decreased in some areas by 77 percent, compared to the time before the conflict.