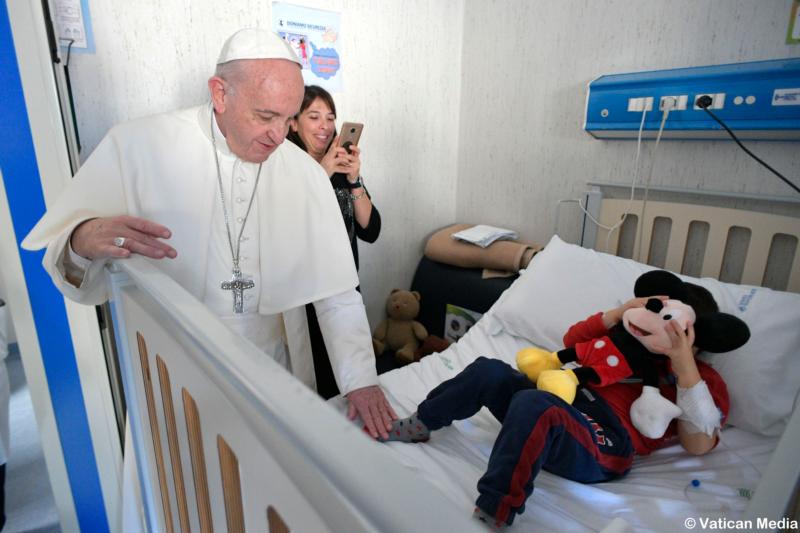 Pope Francis greets a patient during an unannounced visit to the Palidoro Bambino Gesu Hospital, in Fiumicino, outside Rome, in this Jan. 5, 2018, file photo.  (CNS photo/Vatican Media)

VATICAN CITY (CNS) — The Vatican-owned Bambino Gesu Children’s Hospital in Rome is a sign of the Catholic Church’s commitment to caring for and protecting the dignity of the sick, said Cardinal Pietro Parolin, the Vatican secretary of state.

Commemorating the hospital’s 150th anniversary March 19, Cardinal Parolin said that the identity of Bambino Gesu Hospital is rooted in Jesus’ call to care for the ever-evolving needs of the sick in a “prophetic” way.

“Even if the situation has radically changed since the time of its first pioneering experiences, the church will never stop paying attention to the sick with that look of love and with that ‘prophetic’ attitude,” Cardinal Parolin said.

Founded in 1869 by Duchess Arabella and Duke Scipione Salviati, it became the first pediatric hospital on the Italian peninsula.

In an effort to guarantee the hospital would have a secure future, in 1924 the Salviati family donated it to Pope Pius XI.

Over time, the hospital added new pavilions, new operating rooms and new outpatient departments. Today, with two branches outside Rome, Bambino Gesu Children’s Hospital is one of the most modern and well-equipped pediatric facilities in the country.

Among those present at the 150th anniversary celebration were Italian President Sergio Mattarella, Rome Mayor Virginia Raggi and various local officials as well as hospital staff.

Cardinal Parolin said that church-run hospitals like Bambino Gesu are a sign of the Catholic Church’s “constant attention to the human person.”

Love, he said, is not only demonstrated in the effectiveness of the hospital’s assistance to patients but also “in the ability to be close in solidarity with those who suffer.”

“Putting the sick at the center means, among other things, knowing how to combine the action of curing the disease with that of taking care of the whole patient, of his or her person and of his or her emotional, relational, psychological and even spiritual world,” the cardinal said.

Although Bambino Gesu Hospital carries out its mission in Italy, Cardinal Parolin said it also shares the universal mission of the Catholic Church to proclaim God’s love in the farthest corners of the world.

The commitment of Bambino Gesu Hospital to expanding and training staff at a pediatric hospital in Bangui, Central African Republic, he said, “is a testimony that for Bambino Gesu Hospital, there are no walls or boundaries, nor race or religious affiliation that separate it from charity.”

“With great passion,” the cardinal said, “we want to continue our great task of taking care of sick children, including those who in their countries do not have the possibility, as a sign of the charity of Jesus Christ and his church and to open up and embrace with hope the future that lies before us.”

NEXT: In Syria, Caritas works to promote understanding among neighbors