One-third of Canada’s churches to close within 10 years 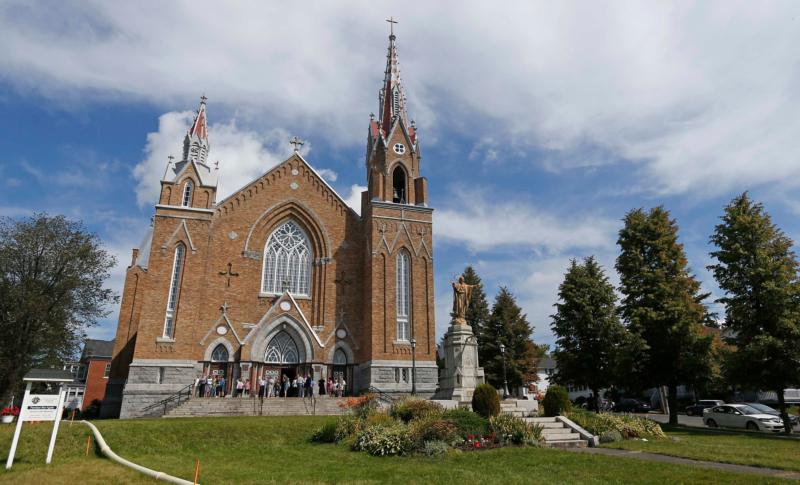 Worshippers leave Sainte-Agnes Church in Lac Megantic, Quebec, following Mass July 14, 2013. A third of Canada’s Christian architecture, some 9,000 churches, will close in the next 10 years, according to the National Trust for Canada. (CNS photo/Mathieu Belanger, Reuters)

TORONTO (CNS) — A third of Canada’s Christian architecture, some 9,000 churches, will close in the next 10 years, according to the National Trust for Canada.

“It’s definitely going to be a bad thing,” architect Roberto Chiotti told The Catholic Register. “You know, it’s our theology in stone.”

Robert Pajot of the National Trust is more or less resigned to the fact that a lot of Canada’s buildings with crosses on them are becoming surplus to the needs of society.

“Yes, we’re going to lose some. Yes, some may be commercial, some may go to condos,” he said.

There are approximately 27,000 places of worship across Canada, which means about one-third of them will be sold, demolished or abandoned over the next decade. But it is not all bad news. In the Archdiocese of Toronto, for example, no closures are anticipated. The archdiocese has built nearly a church per year since the turn of the 21st century.

“The Archdiocese of Toronto is blessed to have a large immigrant population engaged in their faith locally, part of the reason we celebrate Mass in more than 35 languages each week,” said Neil MacCarthy, archdiocesan spokesman.

That’s a stark contrast to rural and small-town Nova Scotia, where the Diocese of Antigonish has already closed 30 percent of its churches over the last dozen years. Father Don MacGillivray, diocesan spokesman, expects more closures are coming.

“I’m not a demographer by any stretch of the imagination, but you know people have to mostly leave for work,” he said.

For five years Father MacGillivray was the director of pastoral planning for his diocese, a job that put him in the position of closing St. Anthony Daniel in Sydney, Nova Scotia, while he was still pastor there.

“My philosophy always is, we need to do this in an orderly fashion where we can be pro-active rather than be up against the wall and have to be reactive,” he said. “Do you let a place go to the point where they (parishioners) just can’t support it anymore? Or do you try to plan?”

The story is similar in New Brunswick and Quebec, where large numbers of churches have been shuttered or are slated to close. Dozens of Catholic and Protestant churches in small towns across Western Canada and in southwestern Ontario also have been closing for years.

Under canon law, final decisions about closing Catholic churches, amalgamating parishes and finding other uses for buildings belongs solely to the bishop. But in Antigonish, Father MacGillivray always tried to involve the worshipping community. He would meet with the parish, lay out their financial obligations and the demographic realities in terms of parish population, then ask for suggestions.

In places like Antigonish, it is not just the declining number of parishioners or their ability to pay for the repairs and maintenance an old church requires. There’s also a dwindling number of priests. However, Father MacGillivray disputes the idea that a priest shortage is driving decisions to amalgamate parishes and close churches.

“I think it can be argued we don’t have a shortage of personnel. We have an overabundance of infrastructure,” he said.

When St. Anthony Daniel and Sacred Heart closed in Sydney in 2014, there were six parishes in an area where no church was more than two miles from another.

“We just didn’t need that many buildings,” Father MacGillivray said.

In the countryside, Antigonish must answer how and when worship will happen at all the little churches dotting the landscape.

“If a priest has to travel to different places, what is a reasonable amount of traveling for a guy who is close to being considered a senior citizen, or indeed is a senior citizen?” he asked. “We do have a question of shrinking resources, for all kinds of reasons, and we have to marshal them in a prudent and responsible way.”

“It is bad news from a faith community perspective, in that it indicates a lack of commitment to faith communities as the locale where people identify community,” she told The Catholic Register.

Fry works for Regeneration Works, a joint project with the National Trust for Canada. If a building has served the community for a century or more, Fry believes it should continue to bring people together — whether for concerts, yoga, child care or charitable work.

Catholics have not been beating a path to Fry’s door because canon law and Catholic culture make it difficult to imagine a Catholic parish as part of a shared-use building.

“In accordance with Catholic ecclesiology and canon law, it is the local diocesan bishop or eparchial bishop who is responsible for church buildings in his diocese or eparchy,” Lisa Gall, spokeswoman for the Canadian Conference of Catholic Bishops, said in an email.

In Antigonish, cashing in on surplus real estate is a major consideration. The diocese is still paying off a class-action lawsuit related to clerical sexual abuse.

“Of course, all our obligations there have been met,” Father MacGillivary said. “However, we still have an outstanding bill, a loan. So all excess real estate is going to satisfy that loan.”

Last year, the Vatican held a conference on decommissioning and reusing church buildings, then issued 14 pages of guidelines for bishops. Holding onto old buildings for the sake of holding on is not a good idea, according to the guidelines.

“Churches which are abandoned or in a dangerous state actually constitute a counter-testimony,” the guidelines said.

The Vatican’s view is that if the community, the state or the local tourism industry wants to preserve buildings for their historical and heritage value, they must find ways to pay for them. In Canada, Quebec is the only province doing that, with its Conseil du patrimoine religieux du Quebec. Each year the fund pays to renovate and restore churches across the province.

Bishops and pastors often see a heritage designation as a disaster for an old church. It means a municipality or province that will pay nothing for a building’s upkeep can dictate renovations and impose restrictions that may chase away possible buyers and depress the price of the real estate.

But even the heritage movement does not always regard heritage designation as the best solution. Pajot calls it a “blunt instrument to slow down the decision-making process, to allow the community to get involved in the discussion.” 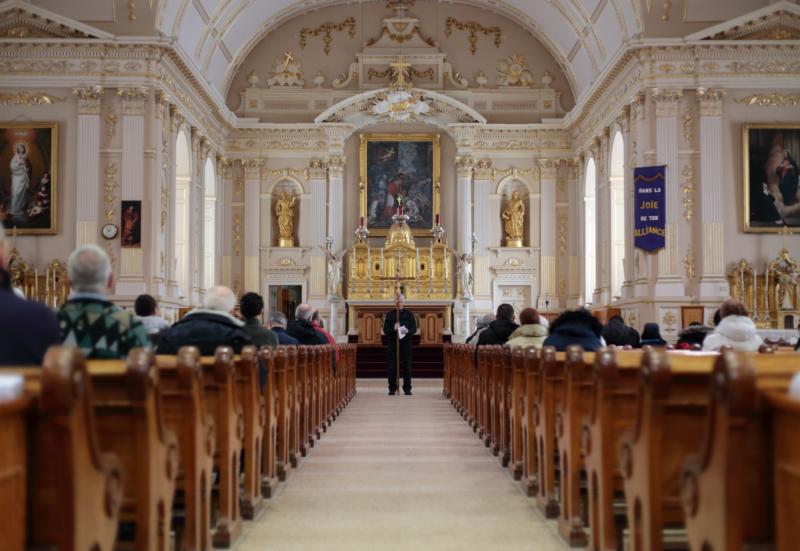 Parishioners from Saint-Charles-Borromee gather inside their 19th-century church in Quebec March 25, 2016. A third of Canada’s Christian architecture, some 9,000 churches, will close in the next 10 years, according to the National Trust for Canada. (CNS photo/Philippe Vaillancourt, Presence)

NEXT: Betraying internal forum is a sin, pope tells confessors