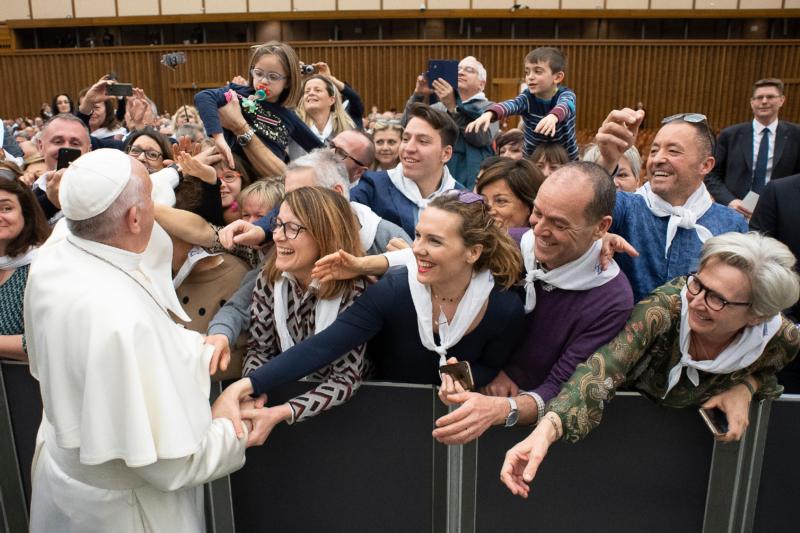 Pope Francis is greeted as he meets with people involved with Italy’s Youth Tourism Center, a Catholic program promoting travel and cultural exchanges, March 22, 2019. During the meeting in the Vatican audience hall, Pope Francis said vacations are not just about seeing monuments, but should involve getting to know other people and places, increasing mutual understanding and respect. (CNS photo/Vatican Media)

VATICAN CITY (CNS) — Going on vacation or visiting new places should include more than just looking at all the attractions, Pope Francis said.

Tourism offers a chance to get to know people and places, to increase mutual understanding and respect, he said March 22 in a speech to members of Italy’s Youth Tourist Center. The center, which is part of Catholic Action, was celebrating the 70th anniversary of its founding.

“If I visit a city,” the pope said, “it is important that I know not just the monuments, but also that I realize the history behind it, how the people live, what challenges they are trying to face.”

“If I climb a mountain, not only must I keep within the limits that nature imposes, I must respect it, admiring its beauty and safeguarding the environment,” he added.

The pope praised the group’s latest campaign of promoting “slow tourism,” which is more concerned with personal encounters and exchanges than with “consumerism” and a competition of racking up “experiences.”

He asked the young people also to reach out to peers who seem unmotivated or disillusioned.

“Perhaps because of the pessimism around them, they do not dare fly high, but they settle for survival or just eking by” as if they had already “gone into retirement,” he said.

“You can have them go with you on trips,” he said, and help reignite their enthusiasm, which has been buried by “the ruins of disillusionment or by the thick dirt of bad examples.”

“Sharing free time” with other young people in need could be the “key to unlocking the door of many young people, creating bonds of friendship capable of carrying authentic values and the faith,” he said.