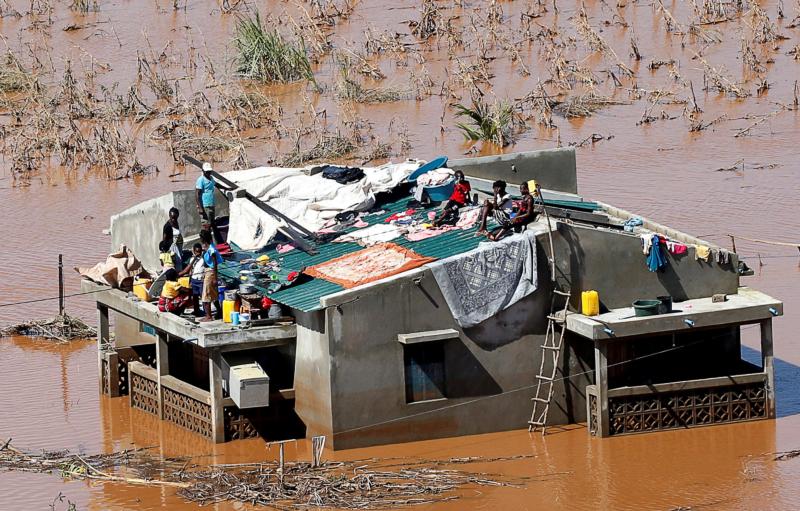 A stranded family sits on top of their home March 21, 2019, in the aftermath of Cyclone Idai outside Beira, Mozambique. Hundreds were feared dead in Mozambique four days after a cyclone slammed into the country, submerging entire villages and leaving bodies floating in the floodwaters, the nation’s president said. (CNS photo/Siphiwe Sibeko, Reuters)

UPDATED – VATICAN CITY (CNS) — As an immediate sign of his concern and an encouragement to other donors, Pope Francis has sent $50,000 each to Mozambique, Zimbabwe and Malawi to assist with initial emergency relief efforts after a cyclone hit the region and caused massive flooding.

As of March 22, at least 300 people were known to have died, thousands have been injured and hundreds of thousands left homeless, according to the Vatican Dicastery for Promoting Integral Human Development.

The dicastery, which will distribute the aid from the pope through the Vatican nunciatures in each country, said the week of torrential rain in the region has “razed to the ground tens of thousands of homes and public buildings” and made major roads impassable.

The water and electricity distribution systems have been compromised and there is a growing concern about the spread of diseases, particularly through unclean water.

The Vatican described Pope Francis’ donation as a “first contribution” and “an immediate expression of his feeling of spiritual closeness” to the people impacted.

In addition, it noted, the contribution is only “part of the aid that is being gathered throughout the Catholic Church” from bishops’ conferences and charitable organizations.

In Washington, the chairmen of the U.S. bishops’ subcommittee on Africa and their international policy committee said March 22 that Catholic Relief Services has set up an emergency relief initiative to collect resources to provide humanitarian aid “and begin the longer-term recovery efforts” in the three African countries.

“It is with profound shock, horror and sadness that we learn about the devastation and massive loss of life that has occurred … due to Cyclone Idai. The magnitude of the cyclone and the scope of its damages are almost beyond belief,” said Cardinal Joseph W. Tobin of Newark, New Jersey, and Archbishop Timothy P. Broglio of the Archdiocese for the Military Services.

They wrote to the Catholic bishops’ conferences of Mozambique, Zimbabwe and Malawi as the chairmen, respectively, of the U.S. Conference of Catholic Bishops’ Subcommittee on the Church in Africa and the Committee on International Justice and Peace.

The two prelates expressed sorrow and solidarity over the lives lost by the cyclone and offered prayers for recovery efforts.

NEXT: Right to access clean water must be defended, pope says